Where did we get "buster" as in "Look here, buster"?

Americans, at least, have for some time used buster in speech or dialogue as a generic form of address. It has a range of tonalities, from light to affectionate to grimly confrontational.

Listen, buster, you can't beat me no matter how hard you try!

All right, buster, this time you're going down for the count.

As an aside, few people know that Jimi Hendrix's nickname, which his close friends used, was Buster. (The guitar duo of Rodrigo y Gabriela dedicated one of their tracks, Buster Voodoo, to him.)

Etymonline.com has this to say:

As a generic or playful address to a male, from 1948, American English.

The OED gives this:

and has a few citations beginning in 1948 (no doubt where Etymonline got its origin date):

Yet it's used as a name much earlier (Buster Keaton, Buster Brown, etc.), and as the title of comic strips and even a play (see below). It's hard to imagine that the two uses are unrelated. 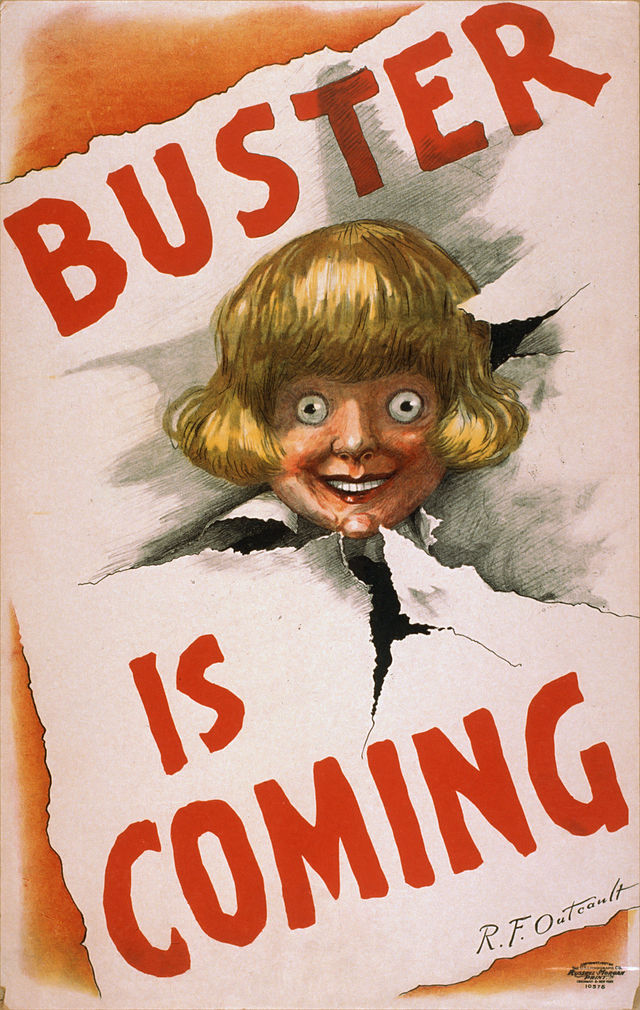 Indeed, Partridge's A Dictionary of Slang and Unconventional English (Supplement, page 1042), gives us this:

Buster. 'A name for anybody whose real name may or may not be known to the speaker. Usually but not necessarily pejorative. "Now listen here, Buster, this means trouble!"' (Leechman): Canadian: adopted, ca. 1920, ex U.S.

It's not clear to me how it got its present meaning from burster or buster (meaning "a gay, roistering blade"), and it certainly doesn't seem likely that it arrived from the meaning of a breaker of horses.

So I'm wondering. Did this just spring into the language fully formed, like Athena from the head of Zeus? Or is there a more mundane, less divine explanation?

I recently watched a documentary on Buster Keaton, which said he got his nickname in a certain way. While I can't reproduce that here, Wikipedia has something close to it:

According to a frequently repeated story, which may be apocryphal,[14] Keaton acquired the nickname "Buster" at the age of about 18 months. An actor friend named George Pardey was present one day when the young Keaton took a tumble down a long flight of stairs without injury. After the infant sat up and shook off his experience, Pardey remarked, "He's a regular buster!"[15] After this, Keaton's father began to use the nickname to refer to the youngster. Keaton retold the anecdote over the years, including a 1964 interview with the CBC's Telescope. In Keaton's retelling, he was six months old when the incident occurred, and Harry Houdini gave him the nickname.

Although the story may be apocryphal, it does clearly point to a usage that was current at the time.

Sense 2b of buster in the online OED is:

b. A form of address to (or occas. a term for) a person, esp. a man, variously expressing affection, familiarity, disrespect, or hostility. Formerly freq. in old buster.

A person who or thing which is impressive or remarkable, esp. in being more than typically large, loud, etc.

So perhaps a big, loud person causes things to bust open, or causes a loud noise to bust out from themselves. Hence, buster.

Not the answer you're looking for? Browse other questions tagged etymology slang north-american-english idiom-meaning vocatives or ask your own question.