Currently I am reading a book titled Configurations of culture growth by the American anthropologist Alfred Louis Kroeber. Part of his book consists of tables that list eminent people from all fields of human activity (science, literature, drama, painting, sculpture, ...).

But there are two abbreviations whose meanings are unknown to me, namely "fl." and "seq.". Do you know what they mean?

Here is an excerpt from Google Books: 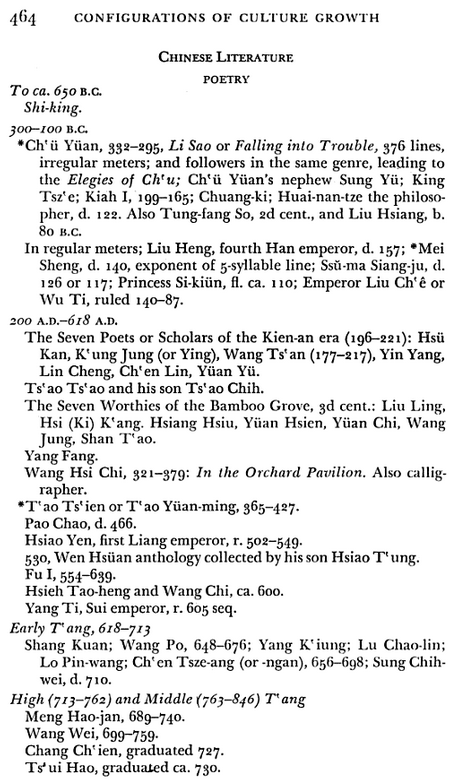 Unfortunately, the page you linked to is inaccessible to me. However, I believe I can still answer your question. Fl. is the abbreviation of flourished (or the Latin equivalent, floruit).

The reference is to the active years of the person next to whose name the abbreviation appears. For example, if you open a history book, and next to the reproduction of a painted portrait on one of its pages you see a caption that reads

it means that the portrait is of Joe Blow, who is believed to have been actively engaged in the occupation he is famous for between approximately 1538 and 1585.

The poster has included a screenshot of the relevant page, and has also added a question about the meaning of seq.

Seq. is an abbreviation of the Latin sequens, meaning approximately 'the following one'. It occurs next to the name of the emperor Yang Ti:

In combination with the r. signifying 'reigned', it means that the emperor Yang Ti reigned from the year 605 onwards, but it has not been possible to specify the last year of his reign (presumably because there is no clear record available to indicate when it ended).

2
Meaning of 'different and again different'
0
What's the meaning of "And this because"?
1
by-and-by: meaning in context
4
What is the literal meaning (and the origin) of "v"?
0
Meaning of "resp." in Debian acpi command
0
Contemplate - meaning and usage