What is the collective noun for lightning(s) / thunderbolts?

Can we use the plural form of lightning with a collective noun? Or should it stay in singular form?

The valleys of Grand Canyon were being struck by a ________ of lightnings and rumbling like a giant open-air opera house with the following thunders.

(Note: This would be a literary sentence than an everyday speech) 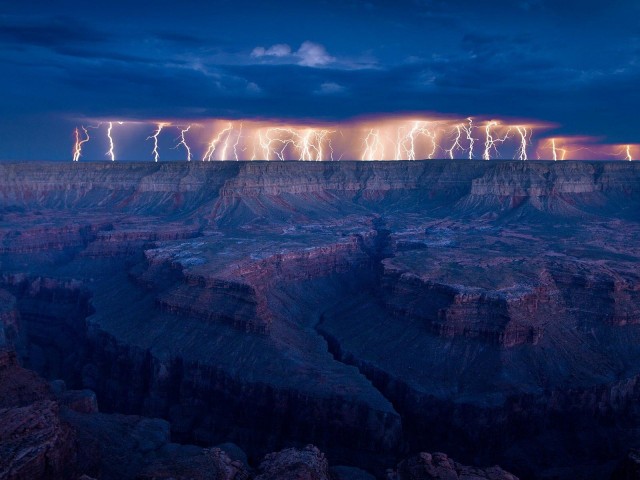 [count noun] literary a flash or discharge of lightning: the sky was a mass of black cloud out of which lightnings were flashed.

You can find literary usages in Google Books as well. Plural form was more common in 1800s and the usage has dropped dramatically but there are still some contemporary usages.

Lightning is used in plural form in technical contexts also. Below are the examples from a technical book called "Lightning Physics and Lightning Protection" (by By Eduard M. Bazelyan, Yuri P. Raizer) also.

The statistics of flight accidents show that aircraft of identical size may differ considerably in the capacity to excite lightnings.

The lightnings people observe most frequently are descending discharges, which originate among storm clouds and strike the earth or objects located on its surface.

Thunderbolt is a count noun.

Note 3: Below is a similar question asked before:
Collective Noun for Fire

The difference between fire and lightning in the context of countability is that fire is also both countable and uncountable but both senses have a common usage.

Lightning is the generic term for this weather phenomenon. In normal, non-technical English an individual instance is a lightning flash, a bolt of lightning or a lightning strike. There is no collective noun for them.

Other suggestions in a non-exhaustive list of possibilities: barrage, volley, parade, procession, sequence and display, depending on which aspect or characteristic of the irruption of flashes seems most salient for the context in which you are describing them.

Because discharges of lightning are ephemeral, and do all not occur simultaneously even during a violent electrical storm, they do not exist as groups in the same sense as a group of children exists, say -- which would be one reason for the lack of a collective noun.

You can call it a cascade of thunderbolts/lightning.

Merriam-Webster defines the noun form of cascade as:

a large amount of something that flows or hangs down

a large number of things that happen quickly in a series

You can also use cascade as a verb. Merriam-Webster defines the verb form of cascade as:

to fall, pour, or rush in or as if in a cascade

An example using cascade as a verb: Lightning cascaded across the sky over the valleys of the Grand Canyon.

Also, Wiktionary says that lightnings as a plural form of lightning is archaic.

I came across this on the web, from the facebook page of Herald and New - Klamath Falls, Ore..

A barrage of lightning overnight touched off about 60 small fires in southwest and south-central Oregon, and more are expected to become apparent today.

And another, from the National Park Traveller web site

Not the answer you're looking for? Browse other questions tagged terminology collective-nouns literary-english or ask your own question.