How did nominal come to mean "within acceptable tolerances"?

The word "nominal" has a number of definitions.

This consistent with the definitions in OED3 and other sources.

Most of the definitions are clearly from the sense of "names" and "nouns" - and from that idea of something being only in name, but not in reality.

However, the aerospace sense seems quite different. During a recent rocket launch, the announcer repeated phrases like "Height is nominal. Power is nominal." to mean these values were within the acceptable and expected ranges.

I wonder if anyone can explain that derivation. Is it derived from the other senses of nominal? Is it influenced by the word "normal"?

The aeronautical sense of nominal derives from engineering where the nominal value is the specified dimension and the reference point for tolerances.

(engineering) A permissible deviation from a specified value, expressed in actual values or more often as a percentage of the nominal value.

Surprisingly, the sense of nominal used in the preceding definition of tolerance is missing from both the Free Dictionary (via AHD4) and OED3. But the requisite definition is found in the Oxford Dictionaries Online:

3 (Of a quantity or dimension) stated or expressed but not necessarily corresponding exactly to the real value: 'EU legislation allowed variation around the nominal weight (that printed on each packet)'

This usage in engineering long predates the space program. The following is from Douglas T. Hamilton's Gages, Gaging, and Inspection(1st edition; 1918; p.30):

It is, therefore, common practice to specify the "limit" -- that is the deviation from the true or nominal size which is permissible. The limit is generally stated by giving the amount that the dimension may be larger or smaller than the nominal size. The diameter of the shaft for example may be given as "one inch plus or minus 0.001 inch..."

One possibility overlooked in the other answers is that although nominal eventually came to mean literally "within normal tolerances", the usage could have been introduced in the sense of "nominal deviation from expected value"; i.e. there is deviation (as there must be from any expected value when measuring real things), but it is small enough to be a deviation in name only.

This also nicely fits as explanation for the other questionable meaning that doesn't suit the etymology: "insignificantly small".

I'm not allowed to comment yet, so I'll take a stab at answering.

By stating that something is nominal you relay the parameters it meets without having to pronounce all those numbers. And pronouncing many numbers can get confusing.

The transition from so named to performing as desired isn't that big a leap. It appears to have started with the industrial revolution and mass production of things such as boots and cannons and barrel hoops, which needed to be binned for military logistics. Thus nominal sizes began to appear. 1/2" drill bits, 6lb cannon, size-10 shoes. Nominal sizes were established as a fixed list of bins covering a size range. Cannons and cannon balls provide a useful example where bin standardization was extremely useful (never mind that a French pound and an English pound were different enough that the cannon balls couldn't be interchanged in the larger sizes.) So anywhere in the world, you could find 3lb, 4lb, 6lb, 8lb, 12lb, etc shot. Step 1: Bin names covering a range of sizes.

The next step was to solidify these bins by specifying performance of, say, an 8lb cannon. These were tested with a calibrated shot and a standardized charge of powder, further reducing the variations among manufacturers. "Nominal" came to be associated with the idea that it will work fine with all the other components so named and binned. A half-inch bolt fits inside a hole drilled by a half-inch bit. By 1900, there were a fair number of "nominal sizing" systems out there, covering areas such as plumbing, arms, and tooling. Here's an 1846 reference to American frigate ships. 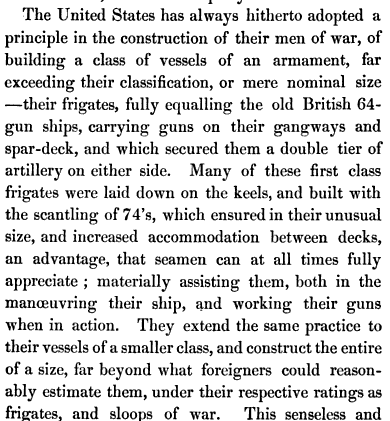 By 1909, we have the association with performance. Here is the Waterhouse carburetor ad, which is compact compared to its "nominal size rating", where size rating is determined from its performance.

Thus step 3: The name/bin is derived from the performance data, performance is now the driver.

By the 1950's nominal performance had taken on a life of its own as concept encompassing the myriad physical and practical limits of a situation. This is very different than the 19th century usage asserting minimal attention to one's duties. It can be found in the nominal performance of turbine cascades (1953), two-hop radio repeaters (1952) and a wide variety of other kit. Here is an early example from Electrical Engineering, Volume 11, 1915, that seems to be pointing the way (unable to post as image, can someone help with that). Although nominal performance literally refers to nameplate data, the phrasing suggests a broadening of the concept beyond that.

From bin names (8lb cannon) to 'nameplate with performance implications' (US frigates such as the USS Constitution), to 'performance rating as the name' (100hp motor), to 'this is far too complicated a performance map to use as a name, but it is what defines this particular thing."

Someone else will hopefully provide some historical evidence. I don't have that to offer.

The "2-by-4" and other examples cited so far fit this. It especially makes sense for contexts, such as standards, where a name or symbol is invented or formally ascribed to a definition that the standards body formulates.

Such a definition sets forth what something is in name, or nominally. For a given occurrence to fit that name the definition must be matched in some way, often within tolerances specified in the definition.

If it fits then it can be called by that name - it is nominally such a thing. This is the case even if according to some other considerations one might normally not think of it as being such a thing.

It may help to think of the expression at least in name or even in name only.

The point is this: Use of the word nominally in such contexts emphasizes the possibility or actuality of a discrepancy between (a) the meaning of the name as formally or defined or as normally/conventionally understood and (b) the meaning of some individuals or occurrences that are classified under that name.

Some things called a given name do not, in some sense, seem to really correspond to what one thinks of as what that name means. There is some difference -- in some sense the name does not really seem to fit.

(This difference is close to what is meant by the letter of the law versus the spirit of the law. The former is the nominal meaning of the law.)

I do not have a factual answer to this question but I hope I can direct the search towards an answer. I am a control systems engineer and, although I am not a sapce engineer, like many engineers I am faced with the use of the word nominal in specifications. Its use is clearly not in line with its etymologocal roots. I interpret its meaning as 'the variables of interest are at the required values'. From an engineering point of view there is no need to consider whether they are within tolerances or not that is agiven part of the engineering. At the point of a rocket launch, where the launch is about to start, the use of nominal, it seems to me, is just a summary that the processes variables required for launch are at their named targets (within the required tolerances). I am guessing that soemone had to make up a rocket launch vernacular (either consciously or otherwise) to succinctly state that all is OK during a process that has to meet strict time limits. Rocket launching is a team enterprise that is focussed on automatic controls.

It's important to note that you are asking about the structure "the trajectory is nominal", not "the nominal trajectory". That grammatical structure is what is responsible for the counterintuitive meaning, not an inconsistent definition of the word nominal.

The nominal trajectory is the ideal, planned, intended trajectory (which, in keeping with the definition, exists "in name only" like a platonic ideal).

I don't think one meaning "evolved" from another. The separate meanings arose in parallel for different purposes in different areas. In general: "nominal" stresses some kind of a distinction between expectations based on the "name" of something and reality. The semantic problem here is that these expectations can go in OPPOSITE directions:

a) people expect the thing to be "as declared in name", but the thing actually differs from such expectations

b) people fear that some thing may differ from the ideal declared in the "name", but the thing actually IS very close to it, and this fact needs to be stressed.

a) Difference: a "nominal fee" stresses the difference between the concept of a "fee" and reality. Normally, a "fee" may be high, but THIS fee is small, "in name" only. "Nominal" here means: "different from what you'd expect from the name". BTW, a "nominal" fee can still be high due to false advertisement or fraud :)

b) Conformance: "nominal length" stresses the opposite: the conformance between "in name" and reality, in cases when people may be worried about inaccuracy. "Nominal" here means "don't worry, very close to what's in the name"

When you are launching or flying a new vehicle or one that flies rarely, there is no "norm" against which you can measure its performance, and so you can't call anything about it "normal." Nominal performance means "performance within design parameters." To me it is a "holy" word, meaning all of the hard, detailed work in engineering a thing, according to a deep understanding of the physics it will see, has been tested in the real world and passed.

Paul FjeldPaul Fjeld
1
New contributor
Paul Fjeld is a new contributor to this site. Take care in asking for clarification, commenting, and answering. Check out our Code of Conduct.
1
Add a comment  |
-1

I would say it is most likely that someone whose mother tongue is not English, once said 'nominal' when they meant to say 'normal'. Unfortunately, it stuck.

I work in the Space industry and the use of 'nominal' is very common amongst my non-English colleagues; even in the non-space parts of their lives.

3
"The machine must be kept operating at its *WORD* " - What is the word?
0
Is it possible for a word not to exist?