I need two words to describe the quality of some items - one word describing items of worse quality than the other.

I read this question, Bad or Poor more severe. I'm uncertain if I fully agree with the answer about "bad" being worse than "poor", since poor people still can be good though... Being economically poor and criminally bad, is something different than being of poor quality and bad quality.

I was thinking of using "low quality" and "poor quality" - but I guess "bad quality" may also be an option. The problem is that I'm uncertain if "low" or "poor" is the worse of them (I thought it low was higher quality than poor, but I may be wrong)... In any case, it's not obvious what's what.

What would be the ranging within the two ?

Is there perhaps another better word to be used with "low" (or "bad") - or another set of words alltogether?

I was intrigued by the "adjective ladder" data in a writeup by Hicks et al. cited by a linked answer to a related question in the comments, but I wanted to see it as a graph with error bars to help me gauge similarity and variance. I've plotted it below. 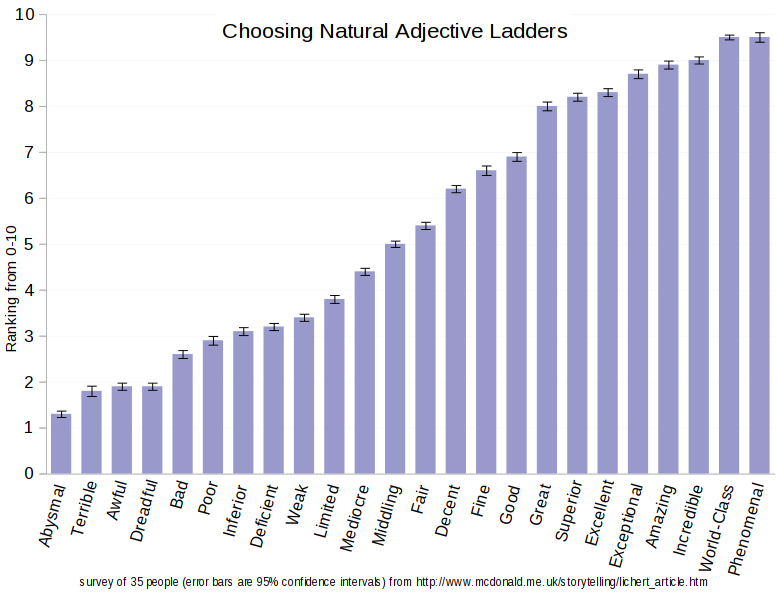 I recommend choosing just a handful of these key terms from this chart whose error bars are well separated from each other with somewhat similar distance between them. Perhaps:

The study has its own similar list of eleven items (abysmal, awful, bad, poor, mediocre, fair, good, great, excellent, amazing, phenomenal). Choosing a subset of six of those would simply entail taking every other: abysmal, bad, mediocre, good, excellent, phenomenal). For five, remove either abysmal or phenomenal.

Be careful not to pick terms that are too obscure! "Abysmal" and "Middling" just aren't popular words. (Though note that popularity is not the same as familiarity.) Consider checking Google Ngrams. Here are the most obscure words out of the 24 on the list (since WWII):

This paper had good methodology, randomizing the list, asking subjects to sort it, then rate it, and a few other tasks the helped them determine subjects' familiarity with each term. They found that "middling" was left blank by most participants, presumably due to a lack of familiarity.

When choosing words, try to avoid the less popular ones (like "middling"). I'd like to see "dismal," "average," and "heroic" in there as well, but keep the list from growing too large.

A larger version of this study could be broken down by region and educational level. If using something like Amazon Mechanical Turk, I suggest restricting participants to regions where English is the primary language rather than the lingua franca.

Most modern scales or grading systems take a quantitative, numeric approach. But we want a qualitative, descriptive, discursive scale. Something that uses words instead of numbers.

So we'll need to find an industry that existed before our age of sterile numbers and soulless analytics, which used a qualitative, yet unambiguous, and fundamentally ordered way to compare the quality of products.

Unfortunately, it seems for most industries, such as beef, and lumber, and gemstones, and coins (numismatics) the scales begin at "decent", or at most, have a single grade for "bad" (probably because the products are intended for sale, and if an individual item is below par, commercially it makes more sense to simply discard it than to spend time grading it in detail). However, there is still one group who's unafraid to call a spade a spade (assuming a spade is somehow undesirable): teachers.

Now, there are innumerable schools, and therefore countless grading systems, but several of them suggest a couple of words to fill in your blanks, and almost all of them agree in terms of relative ordering; so, from "best" (of a bad lot) to worst, we have:

In re: which is worse, "poor" or "bad": when searching for qualitative grading systems, I came across what looks like an academic paper (though produced in industry), which reads, in part:

The quality of A and B was indicated by the assessors on a linear scale. The terms of quality on the left side mean: excellent, good, fair, poor, bad.

"Worse", and "worst" would suit your needs quite admirably, in my opinion, and they would work with either "bad" or "poor". So this widget is bad; that widget is worse, and the third one over there is worst.

"low" and "high" indicate a relative range, a level. Whereas "good" and "bad" are absolute.

I agree with the other post that "bad" being worse than "poor". "poor" indicates it's not very good, where as "bad" is absolute - there isn't much beyond that.

Each of these, when compared to another, should make it quite easy for anyone to understand the order that they naturally fall into. This should not only limit any confusion, but also avoid using the word very, which is a below average quality choice for a category title.

3
Do you agree with these intermediate gradations between “frank” and “evasive”?
2
"Longer running time" vs "high performance"
3
"Bad" or "Poor" is more severe?
2
'Preciseness' and 'Precision'
4
Usage of prevalent and pervasive
0
Is there a word that encompasses both Aerodynamic and Hydrodynamic?
0
Words regarding different types of manipulations
3
When two words produce a distinct meaning