Translation of German "Bolzplatz" – what's the name for an outdoor area whose purpose is to provide room for soccer/football?

I am particularly looking for a good translation for the German word "Bolzplatz". This is an outdoor area where people can play soccer/football (you know, this is the most favorite sports in Germany).

Dictionaries provided me play area, football area, football ground; none of which really carries the connotation of the German word.
Speaking of connotation, the German word bolzen means something like to kick something aimlessly, unsystematically around. Translation for bolzen could be to kick around/about or perhaps to slam. When playing on a "Bolzplatz", people do not have tactics or strategies. They just kick the ball and try to shoot a goal (oh, yet an aim), but there's no clear pattern how to achieve this.

I've read on Wikipedia that playgrounds may contain an area where people can play such sports, but when I think of the term playground, I rather think of an area for little children with swings, jungle gyms and so on.

While searching the Internet, I've also looked up streetball (although I'm pretty sure that terms related to streetball do not carry the meaning of the German word; when saying "Bolzplatz" I'm definitely not thinking of a basketball court) and came across the term outdoor court. This, however, sounds like a well-kept outdoor area which could even be used for professional sports, but a "Bolzplatz" usually is in a very bad shape, like missing turf or torn goal nets.

Hopefully, I could clarify what the German word "Bolzplatz" means. Is there an English word that reflects the same idea or, at least, similarly as given above?

Here's a picture from the German Wikipedia page on "Bolzplatz". 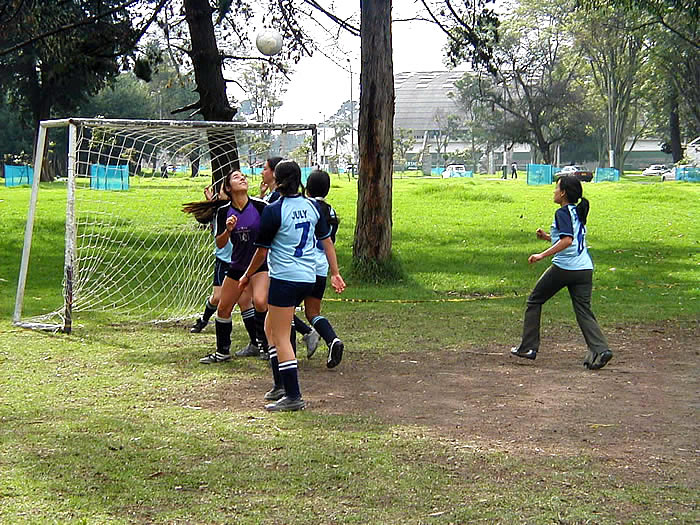 In British English, at least, this is often called a recreation ground. This also seems to fit your description of being in "...bad shape, like missing turf or torn goal nets." as a lot of them are just mown fields, with basic facilities like a couple of goal posts etc. 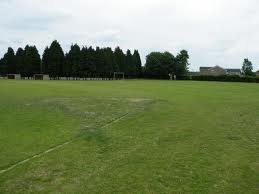 Colloquially it may be shortened to rec or rec ground in some areas. I think this best reflects the description of somewhere where you would go just to "kick around" like you would on a German Bolzplatz. E.g. "let's go have a kick-about on the rec."

@Steve – you have swayed me to playing fields, which I get the feeling is a more widely used term in English in general.

In the UK, these are generally known as "playing fields":

The use is not specifically for football (they are public areas that can be used for a variety of sports) although that is usually the purpose.

As an example of usage, my local council's web site provides a list of facilities in my own local area, which refers to the "Canterbury Way Playing Fields" which happen to be just outside my house.

In Ireland, we would call them pitches. In this example, you can see a list of pitches and open spaces in Dublin where people of all ages can play football: http://www.soccer-ireland.com/football-grounds/south-dublin-council-pitches.htm

In the US, since the goal fixtures are usually permanent, the areas of a park, or a park set aside for soccer, is called a "soccer field" (sometimes plural if there is more than one set of goals). If similarly facilities are provided for baseball / softball, or basketball, these are referred to as "baseball fields", and "basketball courts".

In the late 60's/70's this would be a lot. Sometimes called a sandlot. Usually an undeveloped space in a developed neighborhood (urban or suburban). This is an unregulated area (no formal field markings), usually scrap material found on site would be used for marking bases (for baseball) or goals/lines (for soccer/football).

Since the 80's I normally hear of a similar area simply called a field.

I think you are referring to a: recreational area/space

In the US, we often refer to these areas with names somewhat specific to the sport being played.

Sports like soccer and football are played on a soccer field or football field.

Others are based around a court, like a tennis court, basketball court, volleyball court, etc.

And lastly, some sports are played in places with quite specific names, like a baseball diamond, or a hockey rink.

But soccer by nature is played on a field, so we mostly call them soccer fields.

In New Zealand, (and some parts of Australia), we call them simply "parks" or "fields", a public rough/worn clearing covered in patchy grass and dirt often used for casual games of sports... but I believe these words hold different meanings in other english dialects...

Yeah, just recreation place. Platz is a general word meaning place, like Parkplatz is a parking space or Sitzplatz is a sitting place.

4
Word for outdoor area on the side of a ship
3
Adjectival form of "consult", "consultation" – Translation for the German word "konsiliarisch"
11
What is the name for the walkable area above a stadium?
2
What's the word for a gathering mainly for the purpose of eating food?
1
Name for a street that goes through the green area
12
What is the best English translation for "Mittagsmenü" (German)?
0
What's the word for an outdoor hallway?
1
What is the best translation for the German word "Bündler", meaning an intermediary merchant for agricultural goods and produce?
2
Is there a name for the event where someone leaving a room finds themselves back in the exact same room?