How did 'equity' semantically broaden to mean 'common shares'?

I ask about its meaning for stocks here, not Equity = Assets — Liabilities. See Personal Finance For Canadians For Dummies (2018), p 217.

Equity — not to be confused with equity in real estate — is another word for stocks.

early 14c., "quality of being equal or fair, impartiality in dealing with others," from Old French equite (13c.),
from Latin aequitatem (nominative aequitas) "equality, uniformity, conformity, symmetry; fairness, equal rights; kindness, moderation,"
from aequus "even, just, equal" (see equal (adj.)).
As the name of a system of law, 1590s, from Roman naturalis aequitas, the general principles of justice which corrected or supplemented the legal codes. 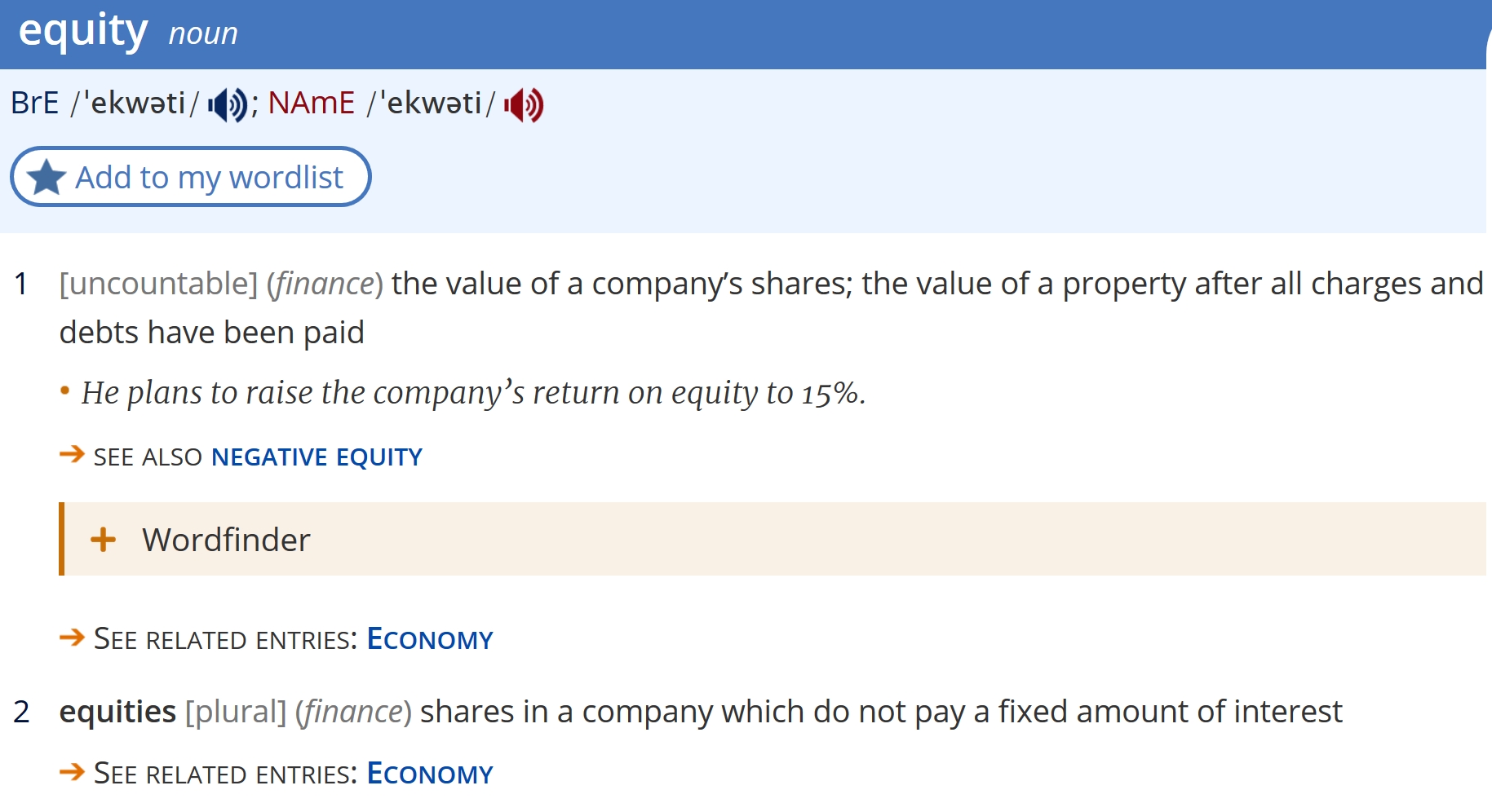 The OED indicates that the relevant evolution of senses was

3. The recourse to general principles of justice to correct or supplement the provisions of the law [1574]

4. In England (hence in Ireland and the United States), the distinctive name of a system of law existing side by side with the common and statute law. [1591]

5. c. The ordinary shares of a limited company. They carry the right to the residue of a company's assets after it has paid all its creditors, and share in the distribution of profits. [1904]

In other words, an equity [share] carries an equity [a legal entitlement] in Equity [the legal system], which applies equity [the principle] in order to achieve equity [fairness and justice].

Some posts from Wordreference.com may enlarge on user 'Gareth Rees' 's answer:

The use of this term is not (directly) related to the notions of mathematical equality (division into equal shares). And "fair appraisal of net worth" is a nice idea, but I don't think that's how capitalism works…

Equity is a term referring to a set of legal principles established in addition to
— and taking precedence over — the "law" (narrowly defined), and originally corresponding to some idea of "natural justice" (naturalis aequitas in Roman law).
The term equities later came to refer to equitable rights or claims (valid "in equity", i.e. according to the principles of equity as applied by a court of equity). Ownership of real property was traditionally a matter of equity, not of law, so financial interests constitute an important class of equities. Which is why we now talk about homeowner's equity, shareholders' equity, negative equity, etc.

CapnPrep's post is right, but it can be put more simply. In English law, there is a distinction between "legal ownership" and "beneficial ownership". The distinction arose hundreds of years ago because the Common Law rules were sometimes too harsh and produced injustices. The Lord Chancellors developed mitigating rules for the sake of equity, i.e. fairness.

When the concept of Joint Stock Companies (the predecessors of modern companies and corporations) started in the 17th century, managers held the assets on trust for the investors and issued certificates confirming the investors' entitlements. Thus the investors owned "equities" in the company, i.e. rights which, when enforced, overrode the trustees legal ownership for the sake of fairness or equity.

More importantly, the borrower has the right to redeem the mortgage by repaying the loan, even if the contractual time for repaying it has expired. That's called the "Equity of redemption" and works exactly like a beneficiary's rights against trustees and for the same reason.

Not the answer you're looking for? Browse other questions tagged etymology finance or ask your own question.