I know it's written WWI, but when I am speaking should I say "World War One" or "World War First" or "First World War"?

I've always heard people referring to it either as "World War One" or "the first World War". I guess the second is slightly more "formal".

Looking for what the Corpus of Contemporary American reports, I get the following data. 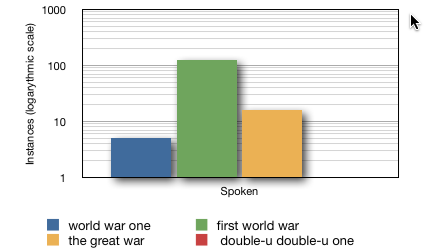 World War II is almost always said "World War Two", so by convention, World War I follows: "World War One".
As an interesting aside, Wikipedia notes:

The terms World War I and First World War both became standard (in the United States and Britain respectively) beginning in about 1940 to 1942; prior to that, it was most commonly called The Great War.

WWI is an abbreviation for "World War One." You could alternatively say "the First World War" or "The Great War" (though that has been rare since WWII), but I would normally expect to see either of those versions written out in full. If the text says "WWI", reading out "the First World War" would not be reading what was written, though it might be a perfectly reasonable thing to do depending on the circumstances.

The three ways to refer to WWI are:

"World War One" is easily the most common. The second is complete misnomer considering the world wars that happened before World War I. The Great War is what WWI was referred to before WWII.

I suggest using "World War One" unless you want to show off your history skills by referring to "The Great War."

Not the answer you're looking for? Browse other questions tagged pronunciation abbreviations or ask your own question.

3
Which abbreviation for the world wars is more correct; WWI or WW1?
2
How to pronounce/say the abbreviation 'i.e.'?
1
How to properly write multiple abbreviations
1
Pronounce abreviation/acronym as word or based
33
How should URL be pronounced?
4
What decides how to read a Roman number in titles?