What led to the increased usage of “schtupping”?

I was listening to a television show the other day and one of the characters used "schtupping":

schtupping — to have sexual intercourse with

Dictionary.com notes that the term's origin is Yiddish:

shtupn — literally, to push (in), press

Etymonline doesn't have the word in its dictionary so I'm not sure how accurate this is.

But what really piqued my curiosity is that I've been hearing the word frequently used in pop culture as a humorous reference to sex. Since it seems like such a strange word, I checked on NGrams and noticed something very strange: 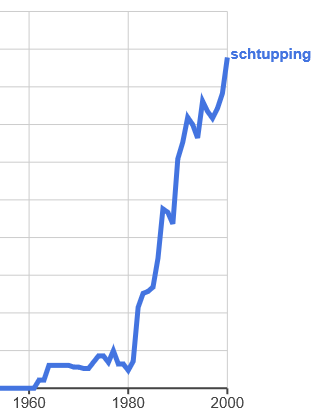 The usage rate massively spikes in the 1980s. Why did this increased usage occur? If the word really is of Yiddish origin, it seems like the word should be much, much older than that.

Instances of schtup/shtup, schtupped/shtupped, and schtupping/shtupping in popular fiction go back more than half a century. From Saul Bellow, The Victim (1956) [combined snippets]:

"Three minutes. Two bits. They cost me eighteen. That's the con." He made his joke sullenly. His cheeks were heavy, his gaze unconciliating. "Three minutes. Don't pester, don't shtup. Buy or beat it." There was laughter among the bystanders.

At least one reference work from the 1960s assigns shtup the nonsexual meaning that Bellow appears to have had in mind. From Mario Pei, The Story of the English Language (1967) [combined snippets]:

There are Yiddish influxes, like schmeetings and shtup (the last means to pressure or pester). There are Negro influences, like ofay, Mister Charley, them (all referring to the whites); Uncle Tom, Aunt Thomasina, Doctor Thomas, honorary white boy ...

MORTY: Why not? I shtupped him a ten-dollar bill. Everything's hot delicatessen.

BESSIE: Why must he come so soon?

MORTY: Because you had a big expense. You'll settle once and for all. I'm a great boy for making hay while the sun shines.

RALPH: I’m not sure what I think.

MOE: I’ll back you up. You’re dead on your feet. Grab a sleep for yourself.

But fictional works employing schtupping/shtupping in its sexual sense were on the market by the early 1960s—for example, in a very silly play by Julie Bovasso called Moon Dreamers (1963), in which each of four characters (Police Chief, Lawyer, Rene, and Mother) confess to having spent “last night between the hours of 7:30 and midnight” in the bathroom, “schtupping.”

Still, the most probable source for the popularization of the term is Philip Roth, Portnoy’s Complaint (1969), which mentions shtupping twice and shtupped once. Here is the first instance:

I was only eight or nine, but she really did have such a terrific pair of legs that I couldn't keep my eyes away from them, the kind of legs that every once in a while it surprises you to find some pale spinster with a pinched face walking around on top of ... With those legs—why, of course he was shtupping her ... Wasn't he?

Other literary lights are honoured by receiving the first citation of a word from Yiddish. In addition to “dreck,” James Joyce’s Ulysses gives us the first citation of “schlep”: “She trudges, shlepps, trains, drags ... her load.” Philip Roth’s Portnoy’s Complaint gives us two. We have "shtup" ("copulate"): "Why of course he was shtupping her"; and "schlong" ("penis"): "His schlong brings to mind the fire hoses coiled along the corridors at schools."

A not-very-successful movie version of Portnoy’s Complaint followed in 1972, though I don’t know whether the word shtupping appears in its dialogue. But the novel was tremendously popular and continues to be deemed a major work of fiction. Instances of words in the schtupping/shtupping family proliferated in the 1970s, as this Ngram graph (with three-year smoothing) indicates:

The fairly dramatic increase in schtupping (the red line) in the period from 1980 to 2000 looks less startling in the context of the earlier rise of shtupping (the blue line). Essentially what changes after 1980 is that schtupping as a variant spelling of shtupping catches on. Variant sh- and sch- forms appear in English for a number of words derived from Yiddish. Merriam-Webster's Eleventh Collegiate notes such variants for schlemiel/shlemiel, schlep/schlepp/shlep/shlepp, schlock/shlock, schlub/shlub, schmooze/shmooze, and shtick/schtick—though it doesn't have any entry at all for schlong, shlong, schtup, or shtup.

The only major fictional work graced by schtupping/shtupping in the immediate run-up to 1980 that a Google Books search finds is Avery Corman’s novel Kramer v. Kramer (1977):

Joanna began to stain severely in her sixth month. Her gynecologist, Dr. Anthony Fisk, who had been identified in Vogue magazine as one of the most successful, eligible young gynecologists in the Western world, prescribed to Joanna, “Rest in bed and put the cork in.” A discussion followed between Ted and Joanna as to the precise medical meaning of his advice. He placed a late-night call to Dr. Fisk, who was irritated at the nonemergency nature of the inquiry and none too pleased to talk to a man, least of all about semantics. He said that his meaning was “Keep her on her ass as much as possible and no more shtupping.” Ted suggested they change doctors, but Joanna was adamant, so they departed for distant sides of the bed.

The movie Kramer v. Kramer, released in December 1979, was a huge hit in 1980, which undoubtedly helped sales of the novel, but I don’t think the comments by Dr. Fisk are in the film. And in any event, the spelling used is shtupping.

For an example of the interchangeability of the sh- and sch- forms, we have no less an authority than Jackie Collins in Hollywood Husbands (1986) [combined snippets]:

“Once Raoul knows, you may as well take out a full page ad in Variety. Everyone is aware you got schtupped last night. And the big question is, by whom? Because it's common knowledge poor old Dennis didn't get lucky."

“Yes, Sol. We were separated at the time. You were shtupping the female bodybuilder with the big biceps. Remember?”

Not the answer you're looking for? Browse other questions tagged american-english usage loanwords yiddish or ask your own question.