Why are female wizards called “witches”?

I was looking up these two words in Longman Dictionary of Contemporary English: 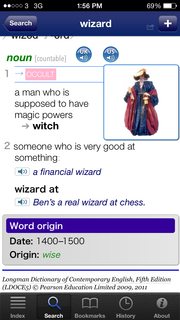 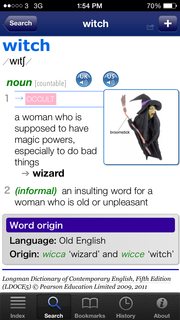 It's mentioned in the Word Origin section that Wizard comes from "Wise", while for "Witch" it totally has a negative meaning, and all in all, apart from this definition, witch is usually negative, while wizard is neutral (or even positive sometimes?!). Isn't this somewhat sexist?

P.S. Both words imply the same occupation, where the female version is negative and the male one is just neutral or even positive. Is it only bad if a woman does it?!

I have actually seen witch used in a male sense as well.

If we look at etymonline, it gives the following definitions:

Old English wicce "female magician, sorceress," in later use especially "a woman supposed to have dealings with the devil or evil spirits and to be able by their cooperation to perform supernatural acts," fem. of Old English wicca "sorcerer, wizard, man who practices witchcraft or magic," from verb wiccian "to practice witchcraft" (compare Low German wikken, wicken "to use witchcraft," wikker, wicker "soothsayer").

(note that the entry is much longer and that the origins are actually not very clear!)

early 15c., "philosopher, sage," from Middle English wys "wise" (see wise (adj.)) + -ard. Compare Lithuanian zynyste "magic," zynys "sorcerer," zyne "witch," all from zinoti "to know." The ground sense is perhaps "to know the future." The meaning "one with magical power, one proficient in the occult sciences" did not emerge distinctly until c.1550, the distinction between philosophy and magic being blurred in the Middle Ages. As a slang word meaning "excellent" it is recorded from 1922.

It seems far-fetched to actually take wizard simply as a male version of witch and vice-versa. The etymonline entry for witch, as well as the OED (thank you Peter Shor) show that the male version of wicce was wicca. They were people involved in witchcraft, magic — supernatural things, rather than wisdom (wizard).

They seem to denote similar but different occupations, one of which became mainly associated with man, the other with women.

About the negative connotations that surround the "female" version... yes, that is sexist. And this is a very common occurrence in (many) language(s). Even though (and I am glad) this is often frowned upon by many people nowadays, and many speakers tend to avoid making distinctions between male and female practitioners of the same profession, in the past it was very common to see a clear (quality) distinction between the male and female versions.

Even nowadays, if one reads these lines:

There will be plenty of people assuming that John sits on a board or a committee, while Mary is a personal assistant. (The distinction is even "worse" in languages that use a distinct version of the word, like in Dutch "secretaris" and "secretaresse" — the latter is grammatically the female version, but in reality denotes a different job!)

It is a simple fact that language exhibits sexist (and sometimes racist and otherwise discriminatory) tendencies. That may be unfortunate, but it should be hardly surprising.

Witch is not an exact equivalent of wizard. Witch is associated with black magic and Wicca religion; and also has a semantic change in time.

Wikipedia mentions the semantic change as below:

The Middle English word wicche did not differentiate between feminine and masculine, however the masculine meaning became less common in Standard English, being replaced by words like "wizard" and "warlock". The modern spelling witch with the medial 't' first appears in the 16th century. In current colloquial English "witch" is almost exclusively applied to women, and the OED has "now only dialectal" for the masculine noun.

Throughout the early modern period, the English term "witch" was not exclusively negative in meaning, and could also indicate cunning folk. "There were a number of interchangeable terms for these practitioners, 'white', 'good', or 'unbinding' witches, blessers, wizards, sorcerers, however 'cunning-man' and 'wise-man' were the most frequent."

A female wizard is called a wizardess which is a better equivalent.

The word witch has never been exclusively female in use.

(In contemporary use Wicca/Wica refers to a subset of modern practices of witchcraft starting in the mid-20th century as a collective noun ["the Wica" in Gerald Gardner, Witchcraft Today, 1954] and later as a name for their practice as a whole; hence a Wiccan is one who practices Wicca being either the form of witchcraft Gardner described, a descendant of it, or a form influenced by it in some way though the differences between them are something I could write a book about. Indeed I did write a book about it. This modern use pronounces the word according to Modern English spelling rules, /ˈwɪkə/ rather than /wɪtʃə/ as the Old English word was pronounced, the spelling changing when Normans introduced the use of CH for ʃ sounds).

The fact that there were once separate male and female forms of the word may have had some influence upon the word going through periods of being associated more with women than with men, and indeed the OED has two separate entries for witch, one specifically male (and derived from wicca) the other specifically female (and derived from wicce), though this seems rather pedantic given that the difference between the two hasn't been discernible in either speech or writing since the 11th century.

There have also been claims at various times that associated women more strongly with witchcraft, most famously those in the Malleus Maleficarum. While the influence of the Malleus upon accusations of witchcraft are arguably overstated, and while there have been times and places where accusations made against men outnumbered those against women (in the far north of Europe, particularly), it does remain that witchcraft became particularly associated with women culturally both when considered negatively, but also when considered positively.

The etymology of wicca/wicce is unclear, and likely comes from a word that simply means "one who does magic" though other suggestions have been made and its worth noting that until recently "wise one" was understood to be the etymology.

It's worth noting that, because wizard almost certainly does come from wise with the -ard suffix which was once used to turn adjectives into nouns (bastard, coward and many other words come from the same process).

So, wizard was a word that more clearly means wise one, and did not necessarily refer to any magical ability at all, but could include a philosophically inclined or mentally gifted person, and indeed was used in such a sense first, hence:

The Grecians..haue therin taken great paynes, naming it first Sophia, and suche as therin were skilled Sophistes or wysardes.

Or to translate some of that into more contemporary English:

The Greeks… had taken great pains, naming it first Sophia [Wisdom], and may of them where skilled Sophists or wizards.

Because witch came to be associated more with women than men, and because wise was understood as being behind the etymology of that name (even if probably incorrectly), wizard came to be used as a male form by some.

Because warlock was also available as a word for male witches, and one more clearly seen as always negative, this led to wizard being more often used where the nuance would be positive, though by no means exclusively so, and some men who were charged with witchcraft or suffered mob-violence on such grounds were referred to as wizards in the records we have of them.

As such, the two words have an overlap between them, but are not so synonymous as to be correctly thought the male and female equivalents of each other. The male equivalent of witch is witch, (or sometimes warlock though a great many witches object to being called this* as a wholly negative term that originally meant "oath-breaker") and the female equivalent of wizard is wizardess (or merely wizard under the general tendency from the late-20th century on to do away with female forms of many words as needlessly sexist).

*To this day the majority of male witches reject the term warlock, though personally I don't get upset being called a warlock as the origins of both it and witch are not as straightforward as those witches refusing it entirely would suggest.

A witch, until fairly recently, was someone who conjured the Devil so as to be granted supernatural powers, typically flight, the ability to cause illness, and more economic success than that reached by whomever was making the accusation. In the last few decades, "witch" has been re-purposed by some soi-dissant neo-pagans to mean "a follower of Wicca" (which is etymologically defensible, however risible the claim otherwise is).

The word is technically gender-neutral, but has considered somewhat female-specific since about 1692, partly by chance but mostly from early-modern misogyny. A pure male equivalent would be warlock, which originally just meant "liar" or "breaker of promises".

A wizard was originally just a "wise one", and outside Harry Potter novels, still is. A financial wizard, for example, is one who is very good with money, not one supposed to be literally supernatural.

Someone who claims to have supernatural powers (or pretends to have them on stage) is a conjuror. Like actor, the word can refer to a male or female practitioner of the art, but a distaff-only version is available, conjuress in this case.

I know the other answers pointed out the technicalities that they're different and that males or females can be considered either, but assuming you're more interested in the systematic matter of it all (regardless of the edge-cases, I'd consider it indisputable that most references to each word carry gender-based assumptions), I think it's probably just society trying to shun away the idea of women, particularly those in power. I don't know about you, but "wizard" sounds like a much cooler word to me than "witch," particularly in that the latter is typically derogatory and carries evil connotations. I just think there's probably a continual discomfort of males in the world to suddenly use the same word to refer to themselves as they do females, particularly when that word has some negative connotations. And on the other hand, we also systematically don't feel comfortable referring to women as wizards just because it seems more powerful.

I suspect it's similar to the difference between "fireman" and, say, "stewardess." Although there are definitely female fire"men" out there, we still base that word primarily on males. And while there are male stewards, our society would never feel comfortable calling males "stewardesses." And yes, I know the words are defined differently based on the gender, I'm not saying the words should be used interchangeably, but you see my point. Witch/warlock are far from the only case of two words meaning relatively the same thing, but the feminine version carrying negative connotations or being disassociated from males.

I'm not disputing the other people who have answered this and given actual roots, since I'm sure those are all valid, but I suspect the gender-imbalance of society is why we still have such strong associations with each word.

Not the answer you're looking for? Browse other questions tagged meaning etymology connotation or ask your own question.

4
What is the female equivalent of “warlock”?
2
Wizard vs Warlock vs Witch vs Sorcerer

13
Why are spies called “spooks”?
11
Why are women called chicks?
5
Why are pot-holes called pot-holes?
21
Why are “muscle cars” called so?
3
Why are illegal drug organisations called “Cartels”?
2
Why are Centennials called that?
1
Why are traitors called moles?
5
Why are “gym rats” so called?