What's the original meaning of "Abraxis"?

Today I realized that I'd been running into the name 'Abraxis' in quite a few different places, and I didn't know what it meant. If it appeared once or twice as the name of a fictional character or a music group, I wouldn't think much of it. None of the occurrences are very prominent. But put together, they suggest a common referent. What are they named after?

A web search on 'Abraxis' turns up a variety of businesses and other organizations that don't have any obvious common thread. None of the web sites I visited offer a clue as to why the name Abraxis was chosen. I'm beginning to think that most of the founders don't know what it means either; it just sounds cool.

Most likely it refers to someone or someplace in history, but I've been unable to find anything online that looked old enough to be original -- a main referent after which other recent instances of Abraxis were named. I'm pretty sure the DC Comic character is not it.

OK I think I finally found it ... apparently it's a misspelling of Abraxas. http://www.jewishencyclopedia.com/articles/633-abraxas

Given that spelling, standard references like Wikipedia give plenty of information. Probably the reason that Abraxas rings a bell for me is Santana's 1970 music album.

But I think this question and answer are still worth something, since the alternate spelling is so common, and does not lead easily to what seems to be the correct spelling.

Well, in my case, I've been using this name for quite some time now, and it was really an intentional misspelling of the Abraxas linked to Gnosticism.

I used Abraxas as a nickname to some game years ago and when I tried to create the same account on a different game the name was already taken. That lead to me trying some variations and Abraxis was the one that stuck.

The Alexandrian Basilides inculcated Egyptian Hermeticism, Oriental occultism, Chaldean astrology, and Persian philosophy in his followers, and in his doctrines sought to unite the schools of early Christianity with the ancient pagan Mysteries. To him is attributed the formulation of that peculiar concept of the Deity which carries the name of Abraxas. In discussing the original meaning of this word, Godfrey Higgins, in his Celtic Druids, has demonstrated that the numerological powers of the letters forming the word Abraxas when added together result in the sum of 365. The same author also notes that the name Mithras when treated in a similar manner has the same numerical value. Basilides taught that the powers of the universe were divided into 365 Æons, or spiritual cycles, and that the sum of all these together was the Supreme Father, and to Him he gave the Qabbalistical appellation Abraxas, as being symbolical, numerologically, of His divine powers, attributes, and emanations. Abraxas is usually symbolized as a composite creature, with the body of a human being and the head of a rooster, and with each of his legs ending in a serpent. C. W. King, in his Gnostics and Their Remains, gives the following concise description of the Gnostic philosophy of Basilides, quoting from the writings of the early Christian bishop and martyr, St. Irenæus: "He asserted that God, the uncreated, eternal Father, had first brought forth Nous, or Mind; this the Logos, Word; this again Phronesis, Intelligence; from Phronesis sprung Sophia, Wisdom, and Dynamis, Strength."

In describing Abraxas, C. W. King says: "Bellermann considers the composite image, inscribed with the actual name Abraxas, to be a Gnostic Pantheos, representing the Supreme Being, with the Five Emanations marked out by appropriate symbols. From the human body, the usual form assigned to the Deity, spring the two supporters, Nous and Logos, expressed in the serpents, symbols of the inner senses, and the quickening understanding; on which account the Greeks had made the serpent the attribute of Pallas. His head—that of a cock—represents Phronesis, that bird being the emblem of foresight and of vigilance. His two arms hold the symbols of Sophia and Dynamis: the shield of Wisdom and the whip of Power." 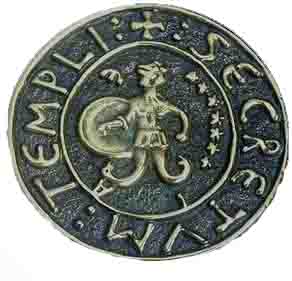 Interestingly a depiction of Abraxas was also incorporated into an official seal that was used by some of the Knights Templar.