Not sure if the tag I've selected is appropriate. Feel free to correct.

Google's definition of gambit is shown below. Interestingly, the ngram usage graph shows that the popularity of the term dropped around 1800 and then rebounded in mid 1950's.

Why is it so? Has the raise any connection to WW2 or the Cold War? Any thoughts on the fall of popularity two centuries ago?

Or is it perhaps due to the way that the popularity is computed?

gam·bit
ˈɡambət/
noun
noun: gambit; plural noun: gambits
(in chess) an opening in which a player makes a sacrifice, typically of a pawn, for the sake of some compensating advantage.
a device, action, or opening remark, typically one entailing a degree of risk, that is calculated to gain an advantage.
"his resignation was a tactical gambit"
synonyms: stratagem, scheme, plan, tactic, maneuver, move, course/line of action, device; 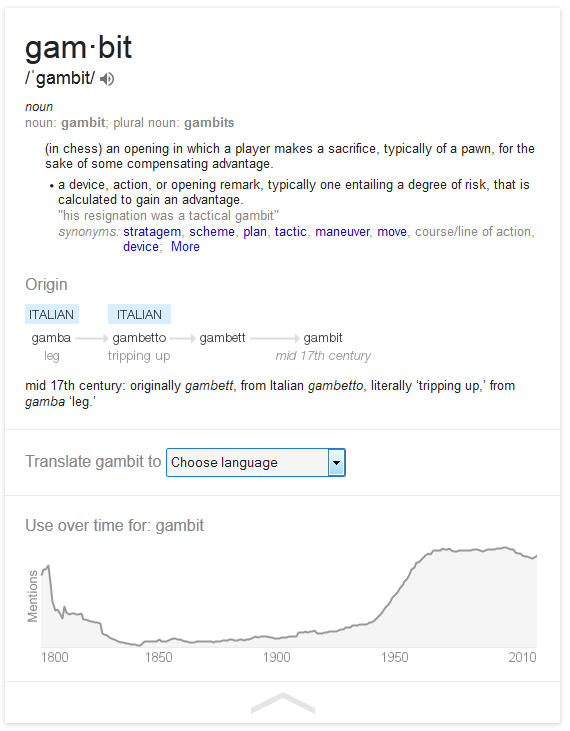 I'm not sure if this is the actual reason, but I think there may be some correlation. Operation Gambit was a smaller part of a very notable WW2 military operation named Operation Neptune - the landing phase of the invasion of Northern France.

I'd assume that perhaps earlier usage of 'gambit' was chess related - and the 1950s revival came about during government and academic post-war analysis of global military operations when the Allied forces declared their victory.

Not the answer you're looking for? Browse other questions tagged usage popularity or ask your own question.

6
Is ‘12ers’ well-established alias for 2012 Presidential candidate?
6
Frequency of word use vs number of words
12
What website will give me the frequency of a word in the English language?
0
Rules for verb usage
0
General usage term for "Project"
2
Proper usage of "assessed" for delinquent bills
1
Is there any authoritative source on the most popular words in English, and what percentage of written material they account for?
1
Usage of "as" for comparison