How was the term 'payload' coined?

Payload is the carrying capacity of an aircraft or launch vehicle, usually measured in terms of weight.

However, Google n-grams has some results from earlier, like this one from Automotive Industries, Volume 30, Chilton Company, Incorporated, supposedly 1914, page 976:

The tilt should be adjustable with relation to the direction of the propeller shaft and the whole power plant and the payload.

suggesting that the word was used earlier. One starts to wonder, whether this is a military terminology, and how did the usage later developed, whether the boom around the '55-65 as seen on n-grams is a result of (literal) rocket science or rather computers (later networking?) or something else.

Are there more information about how this word was coined and how did it develop?

Actually Etymonline suggests that the first use dates back to 1917 and is referred to trucks loads while its military application was later, around 1936.

also pay-load, 1917, from pay + load (n.). Originally the part of a truck's (later an aircraft's) load from which revenue is derived (passengers, cargo, mail); figurative sense of "bombs, etc. carried by a plane or missile" is from 1936.

Ngram shows that military payload has gained currency by the mid 40's and that suggests that the probable origin is from a truck's load.

The increase in use of the term in the 60's is hard to detect since unluckily Ngram does not help from a semantic perspective. Aircraft payload, passenger payload or industrial payload don't show significant increase in that period.

It is also interesting to note the current meanings of payload: 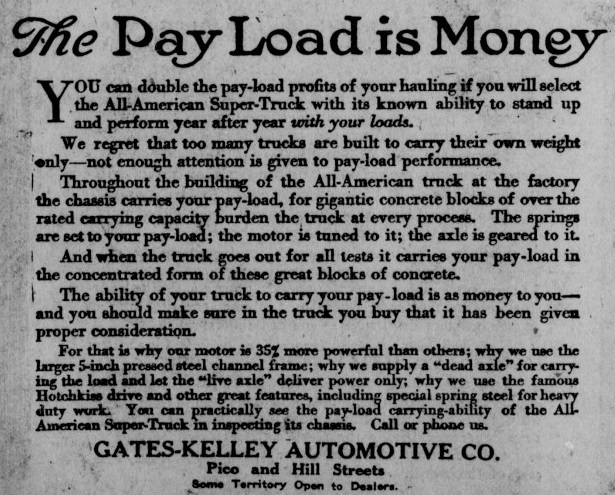 My understanding is that payload was originally the load you literally got paid for in cash. Farmers would haul their harvest to the grain elevators and the elevator operator would cancel their IOUs. The last load was the payload - all the debts had been cleared. Life in agricultural USA was dominated by the idea of the payload for about three decades, and it didn't take long for the advertisers to pick up on the phrase.

The payload originates from train freight, specifically the amount of paying load cars could carry. The 1914 date in the question corresponds to the earliest date attested in the Oxford English Dictionary ("payload, n."):

These pay-loads were the loads that trucks could earn revenue for carrying. By 1914, trucks were becoming sophisticated enough that they could carry significant freight.

Newspapers from prior decades show that the word was used to designate freight in transport, originally for trains:

The context here is train engine hauling - this is an announcement for the Great Western Railroad about improving efficiency. The latter form (paying load) suggests the coinage comes from the load that others pay the train company to carry, or the load that more than pays for itself. (See this 1849 source from user66974's answer.) Distinguishing payload from total weight or equipment weight was important. Several years later, the president of Great Western, A. B. Stickney, uses the word to emphasize pay-load from non-paying car.

"I have already explained that the basis of difference in rates is the differing relation between the weight of the pay-load and the weight of the non-paying car. ("Pleads for Care in State Rate-Making," The Minneapolis Journal, 27 March 1906. Chronicling America.)

The tests involve the question of unloading, the pay-load center of gravity and the number of men required for unloading. ("Test of Ore Cars in Progress at Docks." Duluth News-Tribune, 12 May 1909. America's Historical Newspapers.)

So the word was likely coined for train freight within the transportation industry, and was generalized to other forms of freight.

Just to throw a curve ball, which I think is a baseball term. I like to pan for gold recreationally from time to time, and I've noticed there are a few terms that originated in goldpanning slang that have persisted, e.g. 'flash in the pan'. A couple of others are 'mother lode', being the location in the stream bed where the gold is entering from a seam in the bedrock, and 'paydirt', which is grit containing a decent concentration of gold flakes. It's not a stretch to think that 'payload' might be related somehow (citation needed).

Not the answer you're looking for? Browse other questions tagged etymology history military or ask your own question.