How does one translate 'mast' into English

The Persian word مست (romanized as 'mast') is a staple of mystic poetry. Literally, it means drunk or inebriated. More accurately, it is used to mean a state of spiritual euphoria. It has very positive and active connotations. Despite the Islamic prohibition of alcohol, it is considered a great compliment.

How can it be translated into English?

Perhaps ecstasy would serve in at least some situations.

To be high is to be in a state of high spirits or euphoria. It also means to be intoxicated or in a similar state due to drugs. It is often used metaphorically to mean both - euphoric from some cause. Examples are:

To be high on life is to be exhilerated or thrilled about living.

A runner's high comes from elevated endorphin levels that a runner experiences after prolonged workouts, leading to a feeling of euphoria.

A Rocky Mountain high is a peacefulness or joyousness attributed to living in the Rocky Mountains or in nature. This was used poetically by the folk rock star John Denver in his song of the same name, and was initially though to promote drug use. John Denver actually had to explain the meaning in testimony before the US Congress, when some people felt it necessary to censor the song:

This was obviously done by people who had never seen or been to the Rocky Mountains, and also had never experienced the elation, celebration of life, or the joy in living that one feels when he observes something as wondrous as the Perseid meteor shower on a moonless, cloudless night, when there are so many stars that you have a shadow from the starlight, and you are out camping with your friends, your best friends, and introducing them to one of nature's most spectacular light shows for the first time.

Of course, to be high can still mean that someone is in a stuporous or intoxicated state, perhaps due to drugs or alchohol.

I would say rapt is an equivalent in English.

The etymology of the word gives us a hint also:

late 14c., "carried away in an ecstatic trance," from Latin raptus, past participle of rapere "seize, carry off". A figurative sense, the notion is of "carried up into Heaven (bodily or in a dream)," as in a saint's vision.

As you mentioned poetry; rapt, rapture and enrapt are used in this sense with a bit of religious connotations in British romantic poetry also. And even the rapture itself is a feeling in poetry. You can also see this usage in the poetic style works of Shakespeare.

From the book "The Cambridge Introduction to British Romantic Poetry" By Michael Ferber: 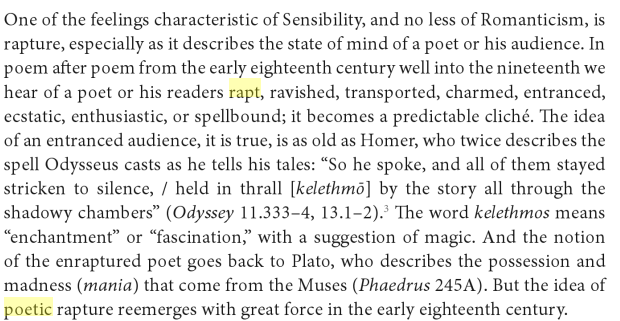 Note: You can read further about how it is used in poems from page 24 and on.

From the book "Shakespeare's Poetic Styles: Verse Into Drama" By John Baxter:

Shakespeare also used enrapt in his work Troilus and Cressida to mean "seized by prophetic ecstasy.":

Come, Hector, come, go back:
Thy wife hath dream'd; thy mother hath had visions;
Cassandra doth foresee; and I myself
Am like a prophet suddenly enrapt
To tell thee that this day is ominous:
Therefore, come back.

In Sufi philosophy, a mast (pronounced "must") is a person who is overcome with love for God, with concomitant external disorientation resembling intoxication. The word originates from the Sufi term mast-Allah meaning "intoxicated with God." from Persian mast, lit. "intoxicated." Another interpretation of its origin is that it is derived from masti, a Persian word meaning "overpowered."

Perhaps '[in] a state of [spiritual] elevation / exaltation'.

Persian mast means “drunk, drunken”. It is used as a metaphor for “spiritually exalted” and the like. But if you want to translate it you need to translate it literally as “drunk”. Otherwise you will be falsifying your source text.