Name for the bumper at the end of a parking spot - is it a “turtarrier”? If so, why?

I was trying to find out if there was a single word to mean the bumper at the end of a parking spot. 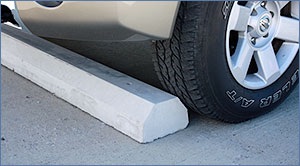 "Parking bumper" is a little unwieldy, and "wheel chock" seems to be more about airplanes or trailers than general parking spaces.

A bit of googling got me the word "turtarrier", but I can't find it referenced in any credible source, nor any etymological justification as to where it came from.

Is this the correct term, or should I use something else? Is it just someone making up a word about parking infrastructure on the spot (what possible reason would there be for someone to lie about this term)? If it is a real word, where did it come from and when?

I don't know if it's any less unwieldy than 'parking bumper', but I see them commonly called 'parking blocks'.

The term 'chock block' comes to mind. It's those long, one-piece, concrete objects that prevent cars from parking with their front tires on the sidewalk. It is broad at the base, tapering to a triangular shape when viewing a cross-section diagram. The 'wheel chock' serves a similar purpose but is a smaller piece about the width of a tire. The long, concrete version is sold as a 'chock block' by Rumber.com and other companies.

About turtarrier. Another answer breaks the word down. So how deep does the rabbit hole goes?

The frames idea is interesting, but is there really enough content to justify their usage?

Very deep. The Free Dictionary manages to link that word to its article on parking space. The word is nowhere to be found in the text or footnotes. Small print at the bottom links to the Wikipedia article on... parking space; turtarrier has a stub there which redirects to that article and the cryptic quote comes from the stub's talk page. How can someone casually say something like that when looking at that word? The "frames idea", where does that come from and does it provide any insight about the word.

Tour. I think the first token is really tour/tower. Tur is a form. There is also the word turo. It is supposedly an elevated pathway in the context of a farm plot - you would walk on that so as not to walk elsewhere. It goes around the plot and may traverse it. This links to the Littré @ turault but there's not much substance. Yet it's in line with many tour related meanings(as in going around i.e. faire le tour de; see this @3). So a mound of some kind. Also noteworthy, some medieval siege constructions can be "towers on wheels".

Tour arrière. I was certain this was fully transliterated from French. As in tour arrière. But it makes no sense with cars, or very remotely as in free circular shaped space at the back; but that would be most unusual and highly abstracted. It was just coincidence I found this gymnastics lexicon which identifies two figures as consisting of a specific kind of tour arrière, as in back flip or spin of some kind. One of these two figures is called a Stalder, I would guess because of Josef Stalder. So I gave stalder to the Free Dictionary for fun and it returned:

Very funny. Why this gives me the clue to explain the reference in the turtarrier talk page is a mystery. And why someone would say that applies to turtarrier per se, which is seemingly unrelated - but for this random/strange link with the gymnastics lexicon - just makes no sense. I'm not familiar with stalder, G images show nothing. I therefore thought the FD was making it up, but no. It's in the NED; a 'horse' or frames for casks to stand on. I understand the words but can't make out the object.

Tarière. It just so happens that a tarrière is a french word for a tool to make a hole in a tree for instance, or sometimes mounted on wheels to... dig "holes" in the ground. Google images yields visuals consistent with using such a tool on a land plot. Finding at the bottom of this tarriere article a reference to tariedre « grande vrille » is nothing short of eerie; I couldn't help but notice this is fully compatible with the gymnastics context as well as very descriptive of what the tarrière looks like. Vrille is a spin, it's a swirled shaped object, and it also spins, like tires. There is no rabbit; imho this was all, the thinking of a machine...

A. It's not clear what part the 2007 Urban Dictionary entry played here but the talk page on wikipedia was created around that time. Why would the word chosen as a hoax exhibit properties of a transliterated word like that etc. What are the chances that turtarrier sounds like a gymnastic figure and that a document containing an explanation about that and Stalder would explain the reference? Maybe it's just me. I don't know, but pending a better answer I would speculate this is either a very obfuscated form of SEO or a failed machine learning experiment; that a program program made a mistake trying to cross-reference semantics; that human error may have contributed. I don't think this word exists.

Note: Colline is a small hill or mount.

Terrier or Tarrier, a tough man, a loafer -The American slang dictionary, by James Maitland

tarrier a) A layabout or loiterer; Someone who tarries.

It is a fascinating irony in that loiterer is defined "making purposeless stops in the course of a trip, journey, errand" but a 'tur' tarrier makes for useful stops

Not the answer you're looking for? Browse other questions tagged meaning single-word-requests etymology or ask your own question.

9
What does “The black spot is under the plate” mean?
24
Why does Germany's English name differ from its German name?
8
What is the etymology of the adjective “bumper”?
14
Synonym for “Blind Spot”
7
Is There a Word for the Spot on the Floor at the end of a Sunbeam?
2
Why do Christianity and Islam not end with “-ism”?
15
Why does “prayer” end with -er?
39
Why “Giraffe” as a name for the animal?