Another word for “carrying pole”?

My sister-in-law wrote in her memoirs that while she and her sister were scavenging for food and water in a burned-out town in Germany during the war, they found and used a pede, which she described in terms that made it clearly a carrying pole, like this: 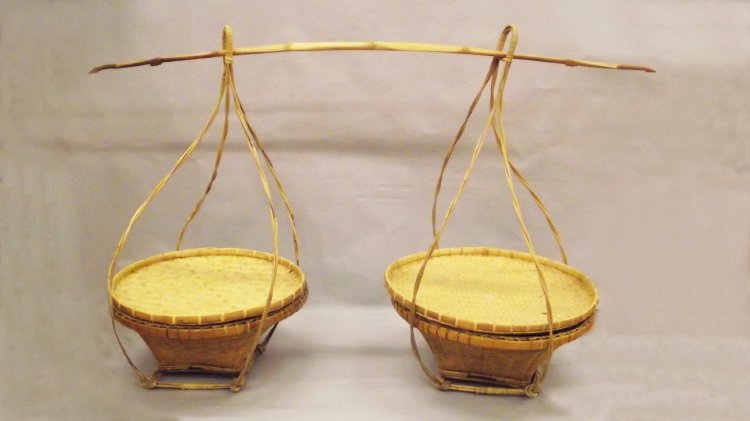 I have not been able to find the word pede, either in German or English. Perhaps, since she was originally from East Prussia, it was an Old Prussian word? Or some other language? I am really perplexed, and my SiL is no help; she doesn't remember the word, either. But there it is.

Edited to Add: Now that I've accepted an answer ("Yoke"), I've continued to investigate the matter, and it now appears that the word may be Low Prussian: "It developed on a Baltic substrate through the influx of Dutch and Low German speaking immigrants." This notion is especially attractive because my sister-in-law seems to have picked up the word during her residence in the burned-out town of Preussisch Holland (or Prussian Holland), a town which was specifically settled by immigrants from Holland in the 13th Century.

The English word for this is "yoke". It is not very common today, as the object it refers to is not common in developed countries today.

Edit: definition 3.a from the OED:

A frame fitted to the neck and shoulders of a person for carrying a pair of pails, baskets, etc.

3
Need a word for having rewritten something after translation
1
Another word for 'audience'
1
Another word for “shot”?
0
Another word for “Ingredients”
3
Single word **or phrase** for somebody who feigns deafness when contradicted?
5
Word/phrase/idiom for 'taking flak' (any kind to any degree) from people who can't handle part of a task (a basic detail)