Is there English word corresponding to Japanese “Bureikoh” meaning an occasion you can talk freely disregarding status and position?

Both Japanese and Chinese have words, “無礼講 - Bureikoh”—in Japanese (verb form 無礼講する) — meaning to make no distinction of status and position where you can speak and act freely without considering pressure and authority of others, difference of position, status and class and “不分座次 - bù fēn zuò cì” (in Chinese) meaning no separation / distinction of seating position and class, at a gathering such as party, dinner, banquet, and social meeting,.

When we convene an unofficial meeting and after 5 o’clock gathering, we used to say “Let’s have a “Bureikoh” meeting (party). You don’t need to worry about whether your remarks benefit you, or harm you throughout the occasion. Speak up freely anything that comes to your mind” to participants. At Bureikoh gathering, everybody is considered to be totally equal, regardless company CEO and sales clerk, boss and subordinate, senior and junior, coach and player, professor and students. You are not punished by whatever you spoke out in Bureiko gathering.

The concept of “Bureikoh” dates back to the warring Middle age (13 Century) when the monarch needed to listen to the voice of his followers on his governance, policy and deeds.

Apart from the provenance of “Bureiko” and “bù fēn zuò cì”, is there any English short word corresponding to “Bureiko,” or “Bù fēn zuò cì” in the meaning of equal opportunity of speech and opinion among all?

In Democratic western countries where everybody is regarded to be equal, I wonder if the concept of "Bureikoh / Bù fēn zuò cì" is viable or not.

I thought “informal meeting” could be close to “Bureiko.” But if you call your CEO or boss a “nuts” or “F_ you” on spot even if it’s informal meeting, you’ll probably get the backlash. Whereas, “無礼講-Bureiko literally means “No punishment on rudeness,” thus nobody will be punished (theoretically) by throwing abuse to, or criticizing superior in expressing his / her own personal opinion, once Bureiko is declared upfront of the gathering, because it’s the rule of Bureiko.

A few similar phrases are common but they don't quite perfectly match. The most obvious is "informal":

informal — free of ceremony: relaxed and casual rather than ceremonious and stiff

This doesn't inherently imply anything about status or position but it can be used to describe a scenario or situation where formalities such as specific procedure involving treatment of persons with such status or rank are not necessary. Pragmatically, however, persons of lower status would still treat those with higher status with greater respect.

The phrases "speak freely" or "act freely" are very commonly used in American fiction to allow behavior between ranks regardless of procedure or expected respect. The stereotypical example is used in strict hierarchies such as the military:

Alice: I think your idea is terrible and one of the worst suggestions I've ever heard.

This phrase does not, however, apply to entire situations such as a meeting. You could use either phrase to describe the effect:

We felt the ability to act freely, regardless of status.

But it doesn't quite have the compact, self-contained meaning associated with the Japanese or Chinese words you have defined.

Aside from those two, I can only think of overly specific terms such as "double-blind" or "brainstorming session". These two have similarities at heart but would never be used in the way your Japanese or Chinese words have been defined.

That being said, if your specific ask is this:

Apart from the provenance of “Bureiko” and “bù fēn zuò cì”, is there any English short word corresponding to “Bureiko,” or “Bù fēn zuò cì” in the meaning of equal opportunity of speech and opinion among all?

There is a concept in logic that specific notes that the origin of an argument is completely irrelevant as long as the logic is sound. This concept is most often expressed through its inverse: A logical fallacy known as the "appeal to authority":

Argument from authority (Latin: argumentum ab auctoritate), also authoritative argument and appeal to authority, is a common form of argument which leads to a logical fallacy when misused.

The basic form of the fallacy is assuming that a particular argument is more correct because it is associated with some authority on the subject. The most flagrant forms of this fallacy will borrow an authority from an unrelated topic (e.g., a sports star) to make a positive claim about a particular product (e.g., an energy drink).

Completely rejecting this fallacy would rely on completely ignoring all status and position when listening to ideas or arguments.

Again, this is not a very accurate translation of your word. It merely holds a few similar concepts.

The best I can think of is the term round-table. The implication is that there's no "head" place, so everyone is supposedly equal. The term is often used even when there's not literally such a table to designate a discussion where all participants are supposed to be treated equally.

Of course, even at such a forum it would probably be foolish to say something that your superior really doesn't want to hear. That's why in medieval Europe, the only person typically given such license was a designated fool.

It is true that in general in the USA at least work hierarchy is expected to be left at work. If I see my boss in line at the supermarket he gets no more deference from me there than any other social acquaintance would. People are expected to be able to speak freely when not "on the clock" (which is why it often makes the news when this expectation is violated).

The legal term without prejudice allows written communications to take place without fear they will be later used against the parties.

I think meetings held under the Chatham House Rule would be similar to Bureikoh meetings.

When a meeting, or part thereof, is held under the Chatham House Rule, participants are free to use the information received, but neither the identity nor the affiliation of the speaker(s), nor that of any other participant, may be revealed.

I am thankful that we in the West don't have as strong a need for a term to escape strictures and ligatures of hierarchy as do the Japanese.

This brilliant scene from the 1985 Japanese movie Tampopo (タンポポ) captures the issue. The lowly trainee leaves the senior executives scarlet-faced and sputtering simply by demonstrating superior knowledge. In reality, I think he would be expected to hide his abilities.

In addition to the excellent suggestions already put forward, I'd describe it as:

A liberal and/or uninhibited casual gathering.

I can't think of a single word that encapsulates everything you want, especially without an example, though it could be described with a few well chosen words.

Similar terms that could be used with this, depending on context are off the record and at ease.

An egalitarian social event in which everybody can participate regardless of social, hierarchical or class divides.

Get-together would be roughly equivalent of bureiko. It usually conveys meeting up with friends and family in an informal setting, but it does not have to include rudeness. Bureiko is more of a cultural thing than simply a meeting.

Note: This is just an attempt to find a single word equivalent but we already agreed that there isn't an exact equivalent in western cultures and I tried to talk about similar concepts. The rudeness part is related with drinking also. When you drink, you can speak up freely and that's why drinking get-together is a close concept in western cultures. It does not mean that we are going to be rude to each other but we can swear more freely in these events. (As mentioned in the source below, the root of the word "burei" means "impoliteness" and "rudeness".)

Also, I found the below entry in a Kanji dictionary:

Also, in western cultures, "after-work drinks" can be equivalent of this business etiquette in Japan. This is where you let loose, drink and speak freely with your co-workers, and even with your boss.

A passage from a Forbes article regarding to "after-work drinks":

During happy hour, bars and restaurants are filled with weary professionals, unwinding after a long day behind a desk or around a conference table. One look at those professionals seems to confirm that an after-work drink is an essential part of networking in business today.

But for many workers, the after-work drink poses a dilemma. Some may feel that drinking with co-workers crosses the line from professional to personal, but one-fifth of office workers admit to going drinking with co-workers at least once a month. The vast majority of those respondents cite bonding with teammates as the top reason for going, while another 11 percent stated that they attend in order to spend quality time with a boss.

The below passage gives an idea about this etiquette which helped with my answer also. (from the book "Japan: Understanding & Dealing with the New Japanese Way of Doing Business" By Boye De Mente): 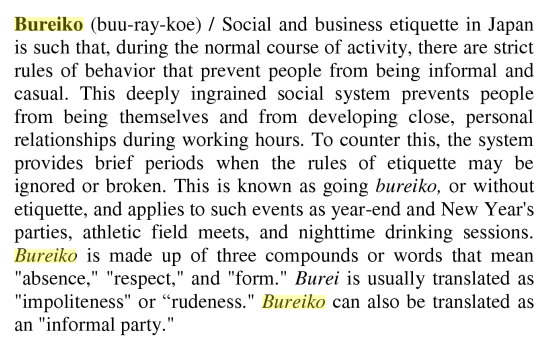 In general, a forum or an open forum conveys this idea of speaking freely in a platform. It can be a meeting or an occasion that people get together for an open discussion and speak up freely.

In English we say "to talk shop", meaning a frank discussion without B.S. about social status, in which you intend to reach the truth.

There is no such corresponding social situation or word for it in English.

That's a bit short, so let me explain. All things can be understood and translated from one culture to another. Children needs to have things explained to them in their own culture. Adults took years of experience and talk to understand things in their own culture. But someone outside of that culture can just as well have gotten that experience and talk to get to understanding.

So it is all a matter of how much time and how many words to capture the experience in another language and culture.

To your particular question, we all have a sense of hierarchy, respect your betters and don't step on their toes. But from culture to culture, that is managed in different ways and the extent of those ways. In some tribes running around the Amazon rain forest, there is no leader and totally democratic. Which is to say there is a leader, but that stage is very transitory and decisions are hardly binding.

For the Japanese term (and cultural situation) bureikoh, you have just described it! Sure, people who speak English experience shame (a word that needs explanation and nuance from culture to culture) and respect (another one) of betters (elders or more experienced). But the words for these and the activities they describe may or may not have direct correspondences.

In the US, if you call your boss an expletive at work, you'll probably be fired. Outside of work, there may be situations in which one might be able to do the same without being fired (a friendly golf game?), but there is no culturally recognized situation with a name in English where this occurs and is expected to occur as you've described.