How nutty are the terms “nut case”, “health nut” and “sports nut”?

If someone is nuts about something/someone it means they are a very enthusiastic— sometimes bordering on obsessive—devotee of that particular thing or person. To be nuts is a colloquial term meaning crazy, mad or insane, and there is the idiomatic expression to drive someone nuts, meaning a person's annoying or irritating behaviour is responsible for making another, figuratively speaking, lose their mind.

It's a pretty obvious metaphor: nuts and human heads have breakable covers, are spherical living things, and are filled with other important living things (some of which may even resemble one another -- compare walnut meats with brain hemispheres visually, for instance).

Nut case, in turn, results in the adjective nuts, meaning 'crazy'. Then, by comparison, crazy about X becomes nuts about X; and someone who is nuts about X is of course an X nut.

Etymology shows that nut as a noun was first associated with insanity at the beginning of the 20th century, but as an adjective (nuts) it was used since 1846. Also the nut-case is first attested in 1959 that is much later than the origin of basket case. It appears there is no clear relation between the two expressions.

I think that the expressions health nut has a derogatory meaning:

A health nut is a person who is obsessed about his/her health. "Health nuts are going to feel stupid someday, lying in hospitals dying of nothing."

while sports nut is more neutral:

I read that the probable derivation is that head became nut, because of the physical resemblance. Then "off his head" meaning crazy became "off his nut" which got shortened to nut.

Now that nut means crazy, most other usages "sports nut" derive from that.

EDIT: Confirmation that Etymology Online agrees with this on this post:

How did the phrase "are you nuts" come about?

The case of "Health nut" and "Sports nut"

I debated whether to edit my findings in my question or ask a separate question altogether. If I included the graphs in my question, it would seem I was less interested in the etymology and usage of nut=insane than I really am.

Anyway, after some reflection I am confident in stating that today health nut and sports nut are not derogatory terms, despite Urban Dictionary's sardonic entry. Although I can imagine someone labelling a person who is careful with their diet and does regular exercise as being a health nut, I feel that health freak is more pejorative and describes a health obsession taken to extreme more accurately. Generally speaking, the current health craze, which started in the 70s, has continued to gain momentum and anyone who cares about their physical health (and appearance) is usually admired.

Television began bringing teams [American football and basketball] from across the country into the spotlight. The exposure of sports continually grew, as did their popularity. Individual sports like tennis and jogging took off (Strasser & Becklund). The health craze swept the nation [...] . By the end of the 70s sports were becoming a marketing tool and industry on a national scale.

Of course I realize that the term sports nut may mean the person enjoys watching sports from the comfort of his/her couch, but the term doesn't preclude the possibility of them actually doing sports. In conclusion the term nut is used to denote someone's passion and enthusiasm rather than allude to their mental health. 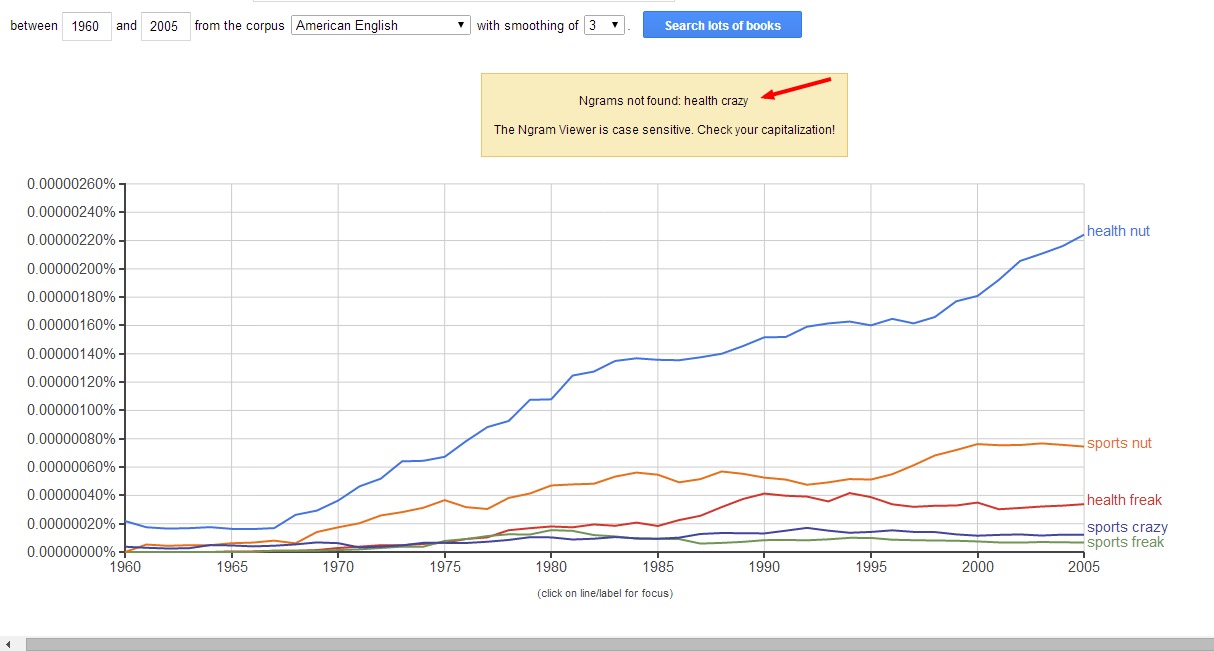 But if we use the same identical terms in the British English corpus, the results are quite surprising. Health freak surpasses health nut and the terms sports crazy and sports freak are non-existent! Why? I can only surmise that the general British public is more cynical and less sports/fitness/health oriented than their cousins across the pond. 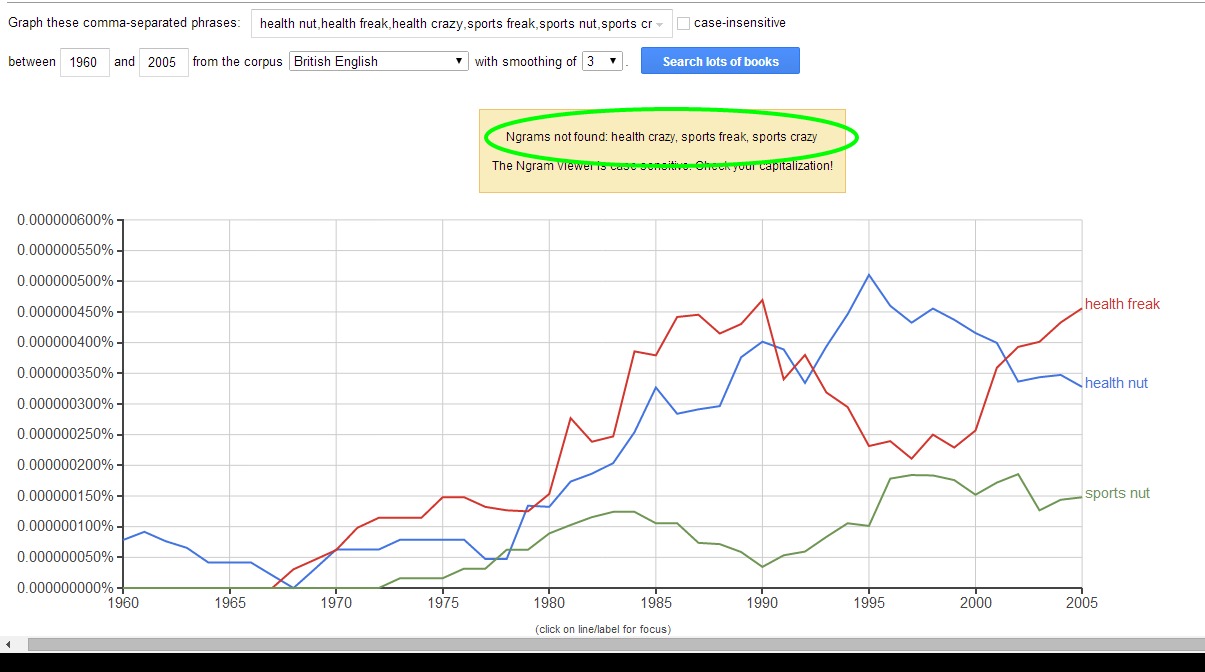 A Dictionary of Slang and Unconventional English by Eric Partridge (this 8th edition is dated 1982) confirms that "health/sport nut" has positive connotations.

Not the answer you're looking for? Browse other questions tagged etymology slang pejorative-language or ask your own question.

19
How did the phrase “are you nuts” come about?
3
How do you describe a person who loves everything natural when it comes to health and food?
0
Is the usage 'literally nuts' correct?
1
What's the “case” in “basket case”?

20
How do I spell the truncation 'Cas', as in 'Sports Casual/Sports Cas'?
23
Are the terms “welsh” or “welch” (as in reneging on a bet) derogatory toward the Welsh people?
3
How did the words “petting” and “necking” come to mean kissing with passion?
2
Origin of the word Waddy and how it came to mean “unappealing, unattractive.”
14
Where did the sports and game term “rubber” come from?
44
How did “s***” and “the s***” come to mean opposite things?
44
What are the origins and proper uses of “s***gibbon”?