What are the technical symbols used in the margin of a page called?

I research Latin texts which discuss a peculiar medieval practice: the addition of minute graphic symbols into the margins of the page, for example in order to indicate passages of interest, flaws in argumentation or for some other technical purpose. For example the PX- and PO-shaped symbols in the right margin here: 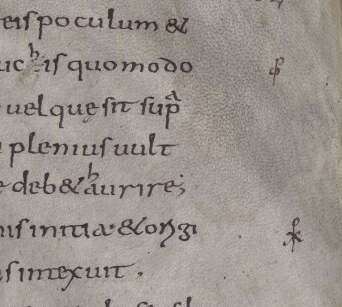 The Latin-users had a very clear technical terminology for such signs: they called them notae (sg. nota) and the verb that they used to talk about this addition was adnotare (plus there was a whole range of words that could be formed from these two). Modern English does not seem to have a term that would have the same technical meaning and I have a constant problem with both native and non-native English speakers when I am trying to write or speak about these notae.

I have tried the English word markup (and its derivates), but this did not find favour with my audience. Translation as signs or marks is too vague and broad to be helpful. I cannot use the Latin word nota indefinitely, especially since I cannot make a verb out of it that would make sense in English.

What would you call this 'thing'?

The passage from Eusebius you refer to in your question, is, strangely enough, the item used to illustrate my reference for this answer.

According to Mariken Teeuwen items that express approval or disapproval (such as chi-ro - ☧ - who's aetiological story, by a strange twist of fate is documented in Eusebius) are called technical signs or signposts. https://prezi.com/5mkn3-nzzbce/annotating-mss/?frame=10bf74f292dd74100949a9a7184382cdd06f7ff2 The obelus and asterisk were used in this fashion, both as marginalia and as interlinear marks.

From the same source marks indicating passages of interest of importance, specifically with a combined or separate N and T or an N alone, are as you said nota. The manicle (pointing hand) was also used, whether this qualifies as a nota, I don't know, though I would think it is the function that is defining in this case.

Does nota even extend to signposts? I would argue that it does, given that the meaning is simply "a mark" (see below).

Collectively scholia covers all later scholarly annotations, marginalia, as you remarked, all marginal items, including probatio pennae and doodles. Neither of these terms, even in combination, seem appropriate

What, then, to call these marks collectively? If nota is considered too obscure, we can turn to the OED (1st Ed) definition "a mark, or stigmata". Stigmata being as bad or worse, in terms of obscurity, I would plump for "marginal marks" - marks quite nicely fits with glosses which refers only to words or longer pieces of text. I would perhaps prefer symbols but your question rules that out. I think this is sufficiently inclusive, and sufficiently exclusive. If it is feared that marks is too wide a term, then marginal glyphs, but here again we stray into the realm of obscurity.

I would call those additions marginalia:

notes in the margin of a book, manuscript, or letter

As for a suitable verb, try annotate.

Scholium A marginal annotation; an explanatory remark or comment; specifically, an explanatory comment on the text of a classic author by an early grammarian. [1913 Webster]

If you are looking for a key to read the symbols. or google "ecclesiastical logograms"

Not the answer you're looking for? Browse other questions tagged terminology vocabulary translation latin or ask your own question.

0
Words Containing the Meaning of Addition of Referential Information

1
What does "hit margin" mean?
3
How are certain technical words used in British English?
29
What are these symbols called in the English language?
13
Is the Latin abbreviation "f" (folio) commonly used in page ranges?
1
What are the machines at the grocery store entrance called?
9
Was the -s in Athens originally the plural -s?
3
What is the Latin term for forward from a page?
0
What symbols are customarily used for “○○” in English?