Do ellipsis, parable, and hyperbole from rhetoric have anything in common with the geometric curves ellipse, parabola, and hyperbola used in mathematics?

There are three geometric curves known as conic sections:

There are also three terms in linguistics with analogous names (in many languages with the same names, actually):

Do they have anything in common? Is there any etymological or other reason connecting each pair together? Does the ellipsis remind the ellipse in any way, etc.? Is there any analogy between them?

In Ancient Greek, where both the rhetorical and geometrical terms were invented, they are the same words, employed in different figurative senses:

The relationship of the rhetorical terms with these origins should be self-evident. I'll focus on the conic sections instead.

We know that the conic sections were referred to by cognates of their current English names by Apollonius of Perga (c. 200 BCE). It is unclear whether he coined those terms, or whether they were already in use at the time. The exact reason why those words were chosen is also a matter of educated speculation; Jeff Miller cites some sources.

One straightforward explanation is that the terms for the conic sections refer to the angle between the cone and the cutting plane. If the cutting plane is parallel to exactly one generating line of the cone, then the conic is unbounded and is called a parabola. If the plane intersects at a smaller angle, it is an ellipse; if it intersects at a larger angle, it is a hyperbola. 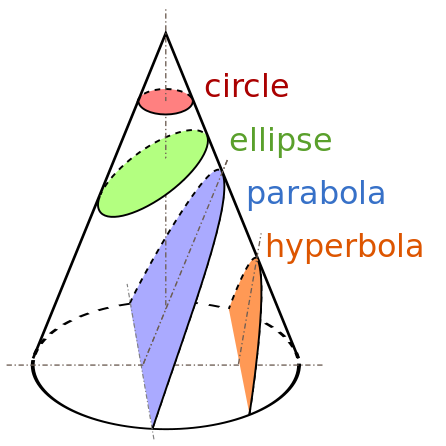 However, the explanation for parabola might be more complicated. According to Online Etymology Dictionary,

1570s, from Modern Latin parabola, from Greek parabole "parabola, comparison, analogy; application" (see parable), so called by Apollonius of Perga c.210 B.C.E. because it is produced by "application" of a given area to a given straight line. It had a different sense in Pythagorean geometry. Related: Parabolic.

That explanation is a bit of an enigma, requiring an illustration from Wikipedia to understand. The blue rectangle has the same area as the orange square, and the rectangle's projected width on the x-axis stays a constant width.

Conic sections can also be classified by their eccentricity:

Although the eccentricity explanation is also simple and appealing, it is uncertain whether that is what Apollonius (or whoever) had in mind when coining the terms for the conic sections.

Not the answer you're looking for? Browse other questions tagged etymology mathematics analogy rhetoric greek or ask your own question.

8
Are the rhetorical meanings of "elliptic", "hyperbolic", and "circular" connected to their mathematical meanings?

35
What is the origin of the exclamation mark?