Is there a special name for small villages? Like a made up name of the village or a real one that functions as a recognizable synonym for a small village? E.g. "This 'town' he lives in is actually the size of _(the name of small village)"

Edit: I was thinking more about something which sounds funny; also, the name does not necessarily have to fit the example. it can be 'as big as _' or whatever comes to your mind.

For the more relaxed requirements of the edited version of the question, how about:

"This 'town' he lives in is actually the size of Dogpatch."

"This "town" he lives in is actually the size of Hicksville."

"This place he lives in is actually the size of a one-horse town."

"This place he lives in is as big as a one-horse town."

Hicksville: Sl. a derogatory term to describe a small town or suburbs.

whistle stop: a small, unimportant town, esp. one along a railroad line.

Alternately, such modifiers as jerkwater, backwater, backwoods, and vest-pocket might fit what you're looking for.

backwoods: mod. of, from, or like the backwoods. n. any remote sparsely populated place

vest-pocket: US small enough to fit into a vest pocket; very small

That way we could see and enjoy more of America, her history, her scenic vistas, her many picturesque vest-pocket towns and villages.

In Australia we have a few equivalents to "boondocks", though that term and "middle of nowhere" are commonly used.

Although these ostensibly refer to remoteness of location, the implication is a small outback township or station (ranch).

Bourke is a town, about 800km west of the state capital, Sydney. Bourke is the edge of settled agricultural districts and where the outback begins. This red dirt road is the Bourke-Wilcannia Highway, 10km west of Bourke 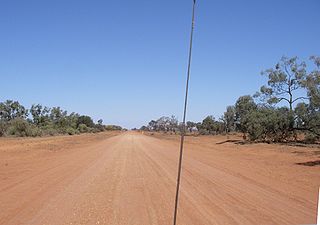 I have heard of townlet, not sure where but it popped in my head.

When the pilgrims came over they created a settlement.

And in the Midwest I have heard small towns referred to as outposts.

A remote part of a country or empire.

I will add that there are a lot of slang phrases too. There was an old phrase, a one-horse town, that was used well when people rode horses.

Now I hear, a one stop-sign town or one gas-station town. Or varieties off of this.

People may also say they live in the middle-of-nowhere or the boonies ,boondocks, or the sticks. There are a lot of terms for unincorporated America.

You can also use the word bum-fuck instead of your town name.

"Little town near Perryville out in the middle of no where. We got a stop sign on D7."

Edit: Another term popped in my head that I still hear a lot - East Jesus. Someone would say, "Damn you live all the way out in East Jesus." Meaning a very small town out in the middle of no where.

Smallville might work (from the Superman mythos, as a typical small town).

A very small town can often be referred to as a "two-horse town".

There's also the very, ahem, colorful expression "You can't swing a [dead] cat [by the tail] [without hitting two people you know]", which is used to describe a town so small that you know practically everybody.

A suffix used in the past for a village in the United Kingdom was by. So arguably you could add by to any English word and voilà, you have the name of a typical quaint English village. Other suffixes used to denote smallness are as follows

England is famous for its apples and cider and there are many villages and hamlets which contain the name apple, thus a typical sounding hamlet is: Appleby; Applecote; Appleston(e); Appledale; Applewood; Applegate... etc. Swap the fruit with pear and you have equally quaint named villages

If the OP is however interested in more amusing and unusual village names I suggest the following, which by the way all exist in the UK.

In the US, we generally refer to "small populated areas that are not incorporated into an urbanized governing body" as a "civil township".

In the US Census, civil townships (Twp) and towns are considered Minor Civil Divisions (MCD) for census purposes.

Not the answer you're looking for? Browse other questions tagged colloquialisms or ask your own question.

2
Phrase for action "testing and correcting"
5
Is "blah blah blah" the most common spelling?
3
What is the term for a common expression that is inaccurate or misleading?
18
Why does common usage of "random" feel so incorrect?
0
Is there a common expression for someone who "always holds a mobile phone in hand"?
2
Colloquial usage of "for to" instead of "in order to"