What's the origin and reasoning behind the phrase, "I've got a monkey on my back"?

900lb Gorilla I can appreciate, but "I've got a monkey on my back" - two opposable thumbs down...

meaning etymology idioms
Share
Improve this question
edited May 24, 2012 at 14:19

Based on a first glance, it's looking like the original expression is "have a monkey on the roof," meaning a mortgage, dating back to the 1800s. Later "on the back" forms referred to any unpleasant burden, and in the 1940s began to be applied to narcotics addiction. No citations worth posting here, so the above is speculative.

I think the phrase predates references to a mortgage as a "monkey on the roof."

The earliest references to piggybacking monkeys involve the backs of other animals. Of these, the earliest I found were references to the cruel and ancient history of dancing bears, accounts of monkeys on baited ponies, and on show camels. In 1807, sportswriter Pierce Egan wrote of a monkey riding a horse. These seem relevant because of their proximity in time to the phrase first being used figuratively and because, in most of these anecdotes, the monkey is either frightening the animal or symbolizing its subjugation.

In 1822, Thomas Gillett published a collection of stories as The Midland Minstrel that included a humorous tale called "The Devil and the Doctor" about some students who teach their overzealous instructor a lesson by dropping a monkey on his back while he's riding his horse home one night. He's convinced the monkey is the devil and, after a mad dash through town, sees the error of his ways. This attribution of evil to the monkey is significant and evolves in later citations.

The earliest figurative use of the phrase I could find dates from an 1836 publication of The Parterre of Poetry and Historical Romance:

Without question, the habit of precaution which prompted him to secure his buttons, alone prevented the abstraction of his pocket-book, and two five-pound Bank of England notes—an admirable piece of ingenuity, which has only been nullified by that purely legal process called docking an entail ! The abridged retires from society with a monkey on his back, and bequeathing a cordial benediction to the author of this diabolical 'Essay on Man.'

The italics were in the original, indicating, I think, the phrase was not in common use at the time. Its meaning is not entirely clear from its context of a man avoiding a pickpocket scheme at a fair. There may be a monetary debt connotation here. We do see a continuation of the monkey-as-devil theme in the use of diabolical.

Next I found what I think is the earliest printed definition of the phrase from the Glossary of Northamptonshire Words and Phrases, 1854:

MONKEY. 'I've put your monkey up,' is a phrase implying, I've roused your spirit, or offended you. 'I've put up your back,' is an equivalent, which see. A child is said to have the monkey on its back, when in ill humour, or out of temper.

And this from The Slang Dictionary, 1874:

Monkey, spirit or ill temper; 'to get one's Monkey up,' to rouse his passion. A man is said to have his Monkey up or the Monkey on his back, when he is 'riled,' or out of temper; this is old, and was probably in allusion originally to the evil spirit which was supposed to lie always present with a man; also under similar circumstances a man is said to have his back or hump up.

Other literary references from the turn of the century reinforce this idea of the monkey as an evil spirit making someone do something they wouldn't otherwise, e.g, this from A Rational Marriage, 1899:

Mealy, will you forgive me for that box on the ear ? It was a beastly thing of me to do ; but I felt a bit ' at bay,' my dear, which you must take on trust, because I can't explain it to you. I had the black monkey on my back ; but it's off again now, and I'm awfully sorry I avenged my own bad temper upon you.

'Why did you break it?' asked Nick. 'Because I had a monkey on my back,' said Beauty. 'Such an evil little monkey.'

There are parallel meanings for the phrase during this same time period, including being upset and being in debt, but these usages are chiefly British.

The earliest mention of drug use I found was in a glossary from the 1938 Journal of Criminal Law and Criminology:

Monkey, a habit, as in 'I have a monkey on my back.' Usually used when one is sick from lack of drugs.

I believe that this slang for opiate addiction was a natural evolution of the phrase from its history of referring to an evil and subjugating force acting on someone beyond their control.

The original reference was to addiction, specifically to heroin, and there are several songs that use it in this way. These days people use it to refer to any compulsion or obligation, including good ones.

There's a much more ancient tale involving a monkey on somebody else's back, namely the fable by Aesop (who lived circa 620–564 BCE) that is known in English as The Monkey and the Dolphin. This version is translated by George Fyler Townsend:

A Sailor, bound on a long voyage, took with him a Monkey to amuse him while on shipboard. As he sailed off the coast of Greece, a violent tempest arose in which the ship was wrecked and he, his Monkey, and all the crew were obliged to swim for their lives. A Dolphin saw the Monkey contending with the waves, and supposing him to be a man (whom he is always said to befriend), came and placed himself under him, to convey him on his back in safety to the shore. When the Dolphin arrived with his burden in sight of land not far from Athens, he asked the Monkey if he were an Athenian. The latter replied that he was, and that he was descended from one of the most noble families in that city. The Dolphin then inquired if he knew the Piraeus (the famous harbor of Athens). Supposing that a man was meant, the Monkey answered that he knew him very well and that he was an intimate friend. The Dolphin, indignant at these falsehoods, dipped the Monkey under the water and drowned him.

In this instance, the monkey got the worse end of the bargain.

in short, the monkeys kept a record of the sins of each person, then reported to their deity. those rats. ...

The American Heros channel on TV stated that President U.S. Grant as an 11 yr. old boy rode a bucking horse as a challenge in a circus. No one else could stay on the horse and when he managed to do so the circus owner provided the additional difficulty of also placing a monkey on U.S. Grant's back while riding the horse. He continued to defeat this challenge as well. Given his age of 11 this event seems to correlate in time with the beginning of the use of this phrase. Though probably coincidental, it is very interesting.

I found an instance going back to 1809. Though it is not used figuratively like it is in The Parterre of Poetry and Historical Romance from 1836 (given the title of the book, I'm pretty sure it's a reference to a street vendor). Regardless, I much prefer it as an origin story...

Now a poor and weary hack, With a monkey on my back Taught by many a knock and bruise, I, the gaping crowd amuse

City scenes, or, A peep into London, for good children, Ann Taylor, 1809, Darton and Harvey (London)

Hunters in Mozambique throw monkeys towards the wild hogs, the monkeys hop on and slow the hogs as they run. 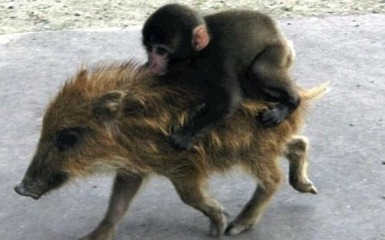 And a video demonstrating how it's down: Hog Hunting with Monkeys

MremikeMremike
1
1
Add a comment  |
Highly active question. Earn 10 reputation (not counting the association bonus) in order to answer this question. The reputation requirement helps protect this question from spam and non-answer activity.

13
What's the origin of the phrase "what have you"?
7
What's the usual meaning of "monkey business"?
0
How do you distinguish "have got" from "got" as the past tense of "get" in "I got my car back"?
1
Origin of the phrases "out back" and "out front"?
2
What's the meaning of "I've got an end darter down on six" in The Pink Panther?
2
Etymology of "got the monk on"
3
Why aren't thumbs generally considered fingers?