What is the name for group of people who line up to create a corridor?

What is the proper name for group of people who line up in two lines to form some kind of a corridor for other people to pass between the two?

phrase-requests expression-choice idiom-requests
Share
Improve this question
asked May 22 '14 at 6:00

There is a term guard of honour that is mainly used in military and sports.

a group of people, usually soldiers, who are arranged in a row at a special occasion such as a marriage ceremony or an official visit, to honour someone very important

In association football, in recent years teams have shown their appreciation to the champions of their own division. This involves the players of one team applauding the league winners (the other team) as they appear onto the pitch.

The applauding team forms two lines to make a corridor, and the league winners run through the corridor, single file. 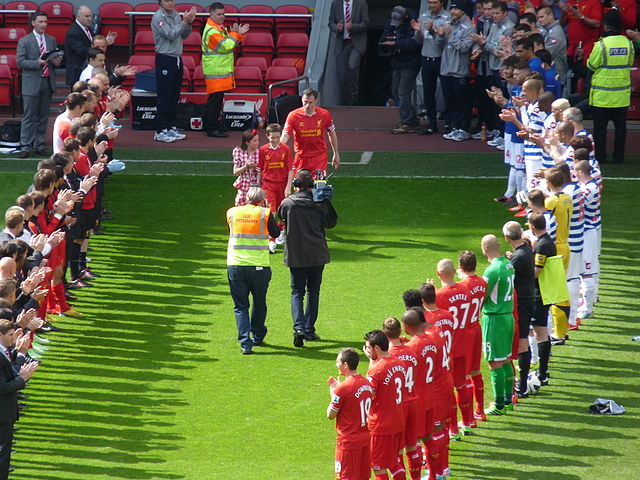 Jamie Carragher receiving a guard of honour from teammates and opposition players on the final match of his career.

If used is a negative sense, this is a gauntlet. You would send a prisoner down the line and the men would beat or switch him to the end.

I would reserve "receiving line" or "welcoming line" for a one-sided line.

If it's just a corridor, that's a gauntlet. I don't think there's any negative connotation in contemporary use. Aisle would definitely work with neutral connotation.

I've heard people refer to it as an aisle of honor, or just simply an aisle.

Depending on the specific context, it can also be called welcoming line or send-off line.

In U.S. sports, the corridor that teammates or fans form is often called a tunnel. In some settings, the temporary structure is termed a "victory tunnel." Though some tunnels include a ceiling created by having each participant hold hands with the person opposite (as in the video above), many do not; such ceilings tend to appear only when very small people are passing through the open space of the corridor. It might make more sense to call the lineup of fans in some tunnels—like this one—a ditch or a trench, but tunnel remains the preferred term.

Outside the realm of sports, the same concept of creating a corridor walled with people is sometimes termed a "human tunnel."

Not the answer you're looking for? Browse other questions tagged phrase-requests expression-choice idiom-requests or ask your own question.

2
What is the proper name of a "line account"?
13
Word for "best person in a group of bad people"
5
What's a good idiom to describe someone who is included in a group only because they have something the group needs
2
A name for the tendency to criticize those who don't succeed
4
What is the name of the "agency" fallacy?
5
A clock or watch using a digital display to show an analog clock face
2
What do you call these people on the street?
4
Word for people who easily believe in rumors, and for a person who spreads them
3
What is the term for a hedge-covered pathway?
0
What is the common name for amateurs who maintain and repair automobiles, particularly their own automobile?