Where does the term "Smurfing" come from?

In multiplayer online gaming, the term "Smurf" (noun) is used to refer to an experienced player who creates a new account for the purposes of being matched against inexperienced players for easy wins. Where does this usage of the word come from?

This definition of smurfing comes from 1996 and the game Warcraft II when certain well-known players made up new names, pretend to play badly, then beat the other players. They picked the names PapaSmurf and Smurfette.

It was used in alt.games.starcraft, and defined in April 1999 as:

someone who makes a new account then pretends they are a newbie.

An origin was offered in the same group in February 1999:

How prevalent do you think fake newbies are? You know, good players who
lure real newbies in for an easy win. Why do they get their jollies from
doing something so stupid?

I think it's interesting to note, however, that this kind of
thing was started in Warcraft II days by Shlonglor and his buddies,
who seem to be demi-gods for some people. They called it smurfing and
Shlonglor's stated reason for it was because they couldn't find anyone
who wanted to play them. So they started picking on newbies and having
great fun 'smurfing' them, that's the name they gave it. He went on to
say how there quickly developed the habit of smurf-smurfing, great fun
he said. Yeah, and who's the one suffering from all this fun the
experienced are having? The newbie, of course. If it isn't the most
inconsiderate behaviour I've ever seen..

A slang term coined by Warp! and Shlonglor to mean good or famous players using fake names to hide from people then attempting to beat other players. It is only a "Smurf" if those players win.

The earliest definite use of smurfing I found was in alt.games.warcraft in August 1996:

heheh, when a really good player is depressed or is looking for fun whipping the living hell out of a newbie, he adopts a fake name and then joins game and ACTS like a newbie, then he thouroughly destroys everyone in the game. this bizzare act is called smurfing, when he said "don't step on any smurfs" he meant don't get so caught up u find a smurf, and then get the living hell beat out of you :)

There was also a reference in alt.games.warcraft that some experienced players were "probably smurfs" in July 1996.

it was started by Shlonglor, who is more than a SC player (he works for Blizzard as their webmaster). He was one of the all-time War2 gurus and was extraordinarily famous due to his war2 page ... still one of the best gaming pages ever created (although it's no longer anywhere on the net ... he took it down when he began to work for Blizzard).

Anyhoo, there came a point in Shlonglor's fame where no one but a few select individuals would play him; everyone, hearing his name, would do one of the following things: cower in fear, worship like mad, or repeatedly challenge like a newbie. In the midst of this it was virtually impossible for him to get a game.

SO ... Shlonglor and his roommate at the time, Warp, came up with a stroke of genius: make up a false name that no one would recognize and go beat the * out of newbies.

For whatever reason, the names they chose were "Papa Smurf" and "Smurfette."

From hence came the term "Smurfing."

-(1996) I was the originator of the term "Smurf" or "Smurfing" to signify a famous person playing games under a fake name. Before that point, everyone stuck with whatever nickname they had and never considered changing their name or playing under fake names. It began when me and Warp! played under fake names "Smurfs" and fooled all our friends. I made a page about it and it caught on big time. Pretty soon everyone played under made-up names and you had no idea who you were playing. This practice continues to happen a TON today and you still hear about Smurfing/Smurfs which all dates back to me, my site, and my Smurf page.

And an extract from an August 1996 game report ("The Smurfs vs Spiderman(Zima), Red Barron, and Void(idiot)") by Warp!:

Well, I finally played a game worth writing a story about. It was a five player game on Garden of War with medium resources. The players involved were Shlonglor (playing as PapaSmurf), Myself (playing as Smurfette), RedBaron, Void, and Spiderman (who we later discovered was the same person as Zima/Cpl_Will). Shlonglor and I were teammates as were RedBaron, Void, and Spiderman.

And then by Shlonglor, this may be the earliest description:

First let me explain the Smurf thing. Warp and I enjoy making up names and playing people at war2. We make them think we really suck and then beat them up. But the joke was on me because Zima pulled my own trick on me. He played as Spiderman making me think he sucked. Beaten at my own game! So sad. Well we have lots of fun playing as smurfs. We talk in smurf. We smurf us some ass at war 2. I guess that is totally childish, but it sure is fun.

I'm not sure I agree with Robusto's answer. I think the term smurfing, as applied to gaming, has more to do with the indistinguishability of the individual Smurfs. Other than Papa Smurf, Grumpy Smurf, Brainy Smurf, and Smurfette, you can't really tell the Smurfs apart by any physical characteristic other than their names. Mostly, they are an amorphous blob of blue bodies in white underpants. That to me suggests how the verb smurfing came about: When a player goes smurfing on an account, that player is purposely choosing to hide his public characteristics -- e.g., his past win-loss record, league ranking, disconnect tells, and network reputation -- for nefarious reasons, and the only thing that distinguishes him is the name he chooses to adopt. He is faceless but for his name, just like most of the Smurfs are. 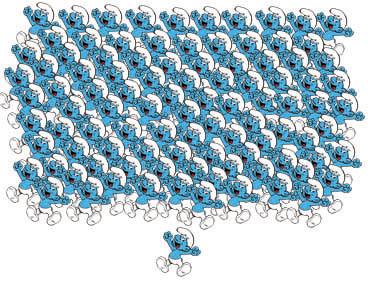 I thought it was because of the "Smurf Attack" where spoofed packets were used. Therefore, spoofing, or hiding one's identity has become generally known as "smurfing" on-line.

However, I have no idea how the "Smurf Attack" itself originally got the name... :-)

Not the answer you're looking for? Browse other questions tagged etymology internet or ask your own question.

3
Etymology of 'smurfing' for money laundering?