Etymology of the word "broker"

I’ve had this personal hypothesis in the back of my mind for many years now about the etymology of the word “broker”.

I have gathered a few pieces of the puzzle (many of them in French and a few of them in English) but I have no firm evidence to back it.

Now that I've come across EL&U, with its high concentration of English Language enthusiasts of all horizons, I’d like to request some assistance, especially regarding the English side of the story.

Many English etymological dictionaries qualify the origin of “broker” as uncertain, and others are just content with mentioning immediate ancestors of the modern word. But there is possibly a more captivating story to this particular word.

In my opinion broker comes from brooch/broach. Here is why.

My conjecture is that this man was also in charge of the auction, hence the “broker”. He would serve as a “broker” between the seller and the buyers. Although it seems logical, I've found this explanation nowhere.

So my questions are:

That's the main question. However I have also a couple of secondary requests, that could actually help reaching a conclusion.

Looking in the OED, I see support for the wine-cask-piercing tool origin, but not for the origin clearly involving one in charge of an auction. There is a connection to wine selling, and this might be close to what you are theorizing.

Etymology: Middle English brocor, -our, brokour, < Anglo-Norman brocour (also broggour) = Old Northern French brokeor ( < Latin type *broccātōrem), nominative brokiere ( < Latin *broccātor) of which Godefroy has one example explained by him as ‘celui qui vend du vin au broc’, as to the precise sense of which see below. The Central French equivalent was brocheor, brochière; and the word is the agent noun of the Old French vb. brochier, Old Northern French brokier ( < Latin *broccāre) in the sense ‘to broach’ or ‘tap’ a cask. Brocheor, brokeor stand in precisely the same relation to the n. broche, broc, and the vb. brochier, brokier, as tapster or rather the earlier tapper stand to the n. tap, and vb. to tap in Teutonic: the brocheor, brokeor, brokour, or broker, was lit. a tapster, who retailed wine ‘from the tap’, and hence, by extension, any retail-dealer, one who bought to sell over again, a second-hand dealer, or who bought for another, hence a jobber, middleman, agent, etc. Compare sense of Latin caupo.

The Romanic vb. broccare was evidently < brocco, brocca in the sense of ‘spike, piercing instrument’ ( < Latin broccus, brocca adj.: see broach n.1). But these nouns appear to have afterwards had their sense modified from the verb, so that in the Old French vendre à broke, or à broche, in modern French vendre à broc, the sense passed from ‘broach’, to ‘broaching, tapping’, and at length to ‘the quantity of wine drawn at a broaching or tapping’, and hence ‘the jug or vessel which held this’, as in modern French broc (from 5 to 10 litres). Anglo-Norman had also a derivative form abrocour, and there were Anglo-Latin words abrocator, abrocamentum; also brocarius ‘proxeneta, interpres et consiliarius contractuum’, and abrocarius. Brocarius appears to have been formed on the n. (broc(c)a, broc(c)us); abrocarius must have been formed on the apparent analogy of brocator, abrocator.

The earliest usages have already lost any connection to wine tapping or selling.

1582 R. Stanyhurst tr. Virgil First Foure Bookes Æneis i. 14 For gould his carcasse was sold by the broker Achilles.

etymonline is not very definitive, but ascribes most likely to Old French brochier. I would then assume that this comes from the same etymology as broche, which is from Latin brocchus (as indicated in my Littré). Broker would thus share, though by different means, the etymology of broach.

I think it's probably instructive to think of the word broach meaning to "raise (a sensitive or difficult subject) for discussion", which is an alternate (and these days preferred) meaning of the word and therefore comes from the same etymology as that of piercing a cask to draw liquor.

ORIGIN Middle English : from Old French brochier, based on Latin brocchus, broccus ‘projecting.’ The earliest recorded sense was [prick with spurs,] part of the general meaning [pierce with something sharp,] from which sense 2 arose in late Middle English . Sense 1, a figurative use of this, dates from the late 16th cent.

This feels to me like what a broker does more than tapping a keg. The sense may be more of opening, starting, raising, or getting something going instead of pricking with a tool (even though that is the inspiration). It is in the transition to the figurative usage that I think broker resides. That is, if I understand your question completely.

Over three years after the question was raised I come across this interesting site, and I wanted to add that here in Spain many people think there might be a connection of the term broker with the Spanish alboroque. This word, from Arabic burûk (present, gratuity), with the article al-, and this related to báraka (luck, opportunity), in turn from beraká (blessing), was used to refer to a gift, a tip or a small feast given by dealers or individuals to a middleperson who had helped in a deal. The word in this meaning seems to be documented since the late 10th century. Apparently it was occasionally used to refer to the person, the agent himself, in which meaning it may be related to the Old Provençal abrocador (second-hand dealer, pedlar) and later Anglo-Norman abrokour/brocour. It also appears in Portuguese alborcar (to trade). I'm not saying that broker comes from Arabic through Spanish, but a relation between the terms seems very likely.

broc meant in addition to "that which breaks," "affliction, misery."

Opinions seem to be divided on the exact meaning of broker. Some etymologists believe that the expression is derived from the Anglo Norman brokour meaning "small trader". However, others claim it is derived from the Anglo-Saxon brocour, meaning "tapster", which in turn came from the Latin broccus, "protecting". Thus someone who used a projecting device to obtain wine samples for examination was called a brocour (or broker).

This is also confirmed in a book proudly titled: Now You Know Almost Everything: The Book of Answers By Doug Lennox (2005) It also states that Brocour first appeared in English 1377 in William Langland's narrative poem called

Yet the following terms chaffare (merchandise); eschanges and chevesances (barter and loans); dele (deal); lene (lend); and lese wol a lyppe at (will lose a part of gold); do not suggest that the brocour was a wine trader or merchant. Wine spelled wyn in Middle English is indeed mentioned in Piers Plowmman but I could find none which specifically referred to the piercing of wine barrels or the trading of this beverage.

BROKER: a name given to persons of several and very different professions, the chief of which are exchange brokers, stock-brokers, pawn-brokers, and brokers, simply so called, who sell household furniture and second-hand apparel

No mention, unfortunately, of wine traders or brokers. 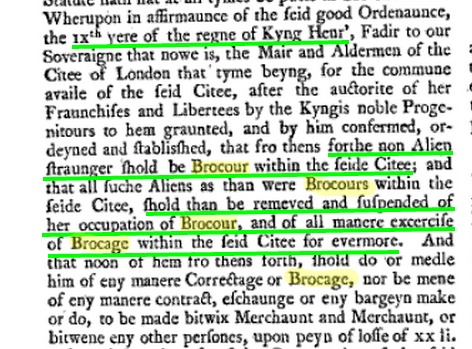 Meanwhile, the OED reports that the expression broken, meaning to have no money, is dated 1593 and defines it as Reduced or shattered in worldly estate, financially ruined; having failed in business, bankrupt.

If a broker is someone who handles other people's money, it makes sense that to be broke means to be penniless. On a website called Etymologically Speaking, I found the following explanation for broke which, once again, is completely unrelated to a wine auctioneer or bidder.

Broke (In the sense of having no money)
Many banks in post-Renaissance Europe issued small, porcelain "borrower's tiles" to their creditworthy customers. Like credit cards, these tiles were imprinted with the owner's name, his credit limit, and the name of the bank. Each time the customer wanted to borrow money, he had to present the tile to the bank teller, who would compare the imprinted credit limit with how much the customer had already borrowed. If the borrower were past the limit, the teller "broke" the tile on the spot.

Source for OED citation: What is the origin of the expression “I'm broke”?

In A Glossary and Etymological Dictionary of Obsolete and Uncommon Words... by William Toone (1834) I found the following entry which suggests that the term broker was used to mean an intermediary for different types of transactions. The entry refers to a marriage broker, once known as a matchmaker, but nowadays what we would call online dating, the world renown agency Match.com is a prime example. The term broker is said to derive from Old French broggour

Not the answer you're looking for? Browse other questions tagged etymology idiom-requests finance or ask your own question.

6
What is the origin of the expression "I'm broke"?