Are there other idioms like "a stone's throw away" that both describe an activity and act as a measurement?

If something is quite close by, it could be described as being a stone's throw away; even closer might be a hop, skip and a jump. I'm interested in these "units" of measurement based on human action. Do you know of other similar words, phrases or idioms that both describe an activity and act as a kind of measurement? They do not have to be limited to distance measurement.

In the southern US, walking distances are sometime described in looks. As in "Then you go 'bout three looks down the road and you'll come to...".

When you start down the road or path, you look for the most distance landmark you can see, and when you get there, you look again...

Obviously the nature of the path and terrain mean that the length of a look varies a lot.

I don't trust him any farther than I could throw him. (unit of trust)

There’s room in her bathroom to swing a cat. (unit of capacity)

I guess none of these are exactly units of measurement—you don’t say things like “It’s about seven stones’ throws away” or “How many hops, skips, and jumps is it to the store from here?” They’re more like thresholds that you measure something against.

In The Joy of Lex, Gyles Brandreth proposed a unit of measure, the millihelen, defined as the amount of beauty required to launch one ship.

Some less common ones:

MilliHelen (artificial, the facial beauty required to launch one ship

More than you can shake a stick at. (unit of quantity)

Big as a house.

I Would not touch him with a ten foot (barge) pole
To come within a gnat's hair, a hair's breadth, or a whisker of something

What about to be a heartbeat away from something?

Don't fire until you can see the whites of their eyes.

I trust her as far as I can throw her. (unit of measure for trust)

I trust him as far as I can see him. (unit of measure for trust)

The university is right in my backyard. (unit of measure for distance)

Some old machinists are fond of the phrase "within a c*nt hair". (Sometimes the adjective "red" is added.)

Also "near as damn" (although personally I'm uncertain just how near that is...)

First time through I forgot this favorite of my grandmother's "If it hadda been a sarpent it woulda bit ye" - used when your keys were on the table next to you all the time you were wondering what became of them, or your glasses were really on top of your head...

I'm not sure if it is quite what you have in mind, but you may be interested in the furlong/firkin/fortnight system of measurement, in which the speed of light may be rendered as 1.8 Megafurlongs per microfortnight.

I just want to add a kind of overview and some links that might be relevant to the subject (in addition to many fine answers).

You should note that in traditional systems of measurement the units were often based on dimensions of human body. According to wikipedia these were often specifically based on proportions given by Marcus Vitruvius Pollio: 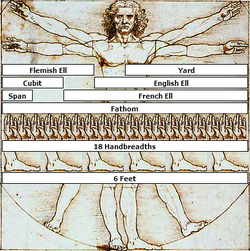 There is an article that list anthropic units such as the yard, the span, the cubit, the Flemish ell, the English ell, the French ell, the fathom, the hand, and the foot.

If you read up on the history of these terms and how they become used, you will find that the all described some sort of human activity and that was the reason these were accepted as units of measurement.

NOTE: I found stone-throw as "steinkast – stone's throw, perhaps 25 favner, used to this day as a very approximate measure of a short distance." under Norwegian units of measure.

They list an interesting unit for medium distances - rast which is lit. rest - a distance you would travel without rest (estimated at approx 9 km).

X bowshot(s) away comes to mind. Lord Bern uses it in C. S. Lewis' The Voyage of the Dawn Treader:

"And about five bowshots hence, when you get open sea on your port bow, run up a few signals."

In Rhode Island, we say:

Q: "How far is Providence?"

A: "Oh, maybe a half-hour," meaning a trip by car lasting thirty minutes.

Perhaps a little off the mark but a "barn" is a standard SI unit equal to 10-28 m2. It is derived from the expression "can't hit the broad side of a barn".

The respected British IT journal The Register has proposed a series of units. Including the nanoWales (20m^2) and a unit of speed based on the velocity of a sheep in a vacuum

There is also an online conversion tool

In Ireland, from older speakers, you may hear that you are within an ass's roar of something (close enough that you could hear a donkey's bray).

Often used metaphorically as well as for actual linear distance, just a (short) step away seems to be getting more common over recent decades.

The intrusive popup displayed when I visit the site is one click away. (I used to be an annoying visitor of some forums; a moderator there said I was just a click away.)

A two finger pour, or any number of fingers used as measurement for pouring liquid, usually alcohol, comes from finger's breath. Using the width of a finger as measurement applies to non-standard but well understood quantities, and the action results in a unit of about an ounce.

A Dictionary of Weights and Measurements for the British Isles: The Middle Ages to the Twentieth Century cites it as 3/4 an inch.

Not the answer you're looking for? Browse other questions tagged phrases idioms measuring-units or ask your own question.

5
Face that launched a thousand ships
2
How far (technically) is a "stone's throw?"
1
Plural of "a stone's throw away"?

1
Are both ‘Hit a raw nerve’ and ‘Tip sb. the wink” predominantly British English idioms?
6
Are there any English idioms to describe “futile benevolence?”
3
What words or idioms are there for "beneficial constructive distraction that would establish or facilitate balance"?
9
Are there any common phrases in the English language that use metric units of measurement?
2
Is there a phrase to describe a ready-to-throw-away phone?
1
Should/can the idioms "on the one hand" and "on the other hand" both support the main issue
1
Are the phrases "in times like these" and "in times like this" both correct?
12
Is there a word or idiom that refers to "short distance", other than "walkable" and "a stone's throw"?