Are there any words in English pronounced with /e/ at the end?

In first-language English pronunciation (Australian, British, American, etc., not Indian, Malaysian, etc.) are there any words with the /e/ (or /ɛ/) sound in "bed" /bed/ at the end of a word? As a counter-example "me" is pronounced /miː/. I don't know of any words ending in "e" where it is pronounced /e/; it is usually either /iː/ or silent. If you do know of any words please specify if they're limited to a certain dialect, region or accent.

No, there cannot be. Phonemic /e/ at the end of a word in English can only occur as a phonetic falling diphthong [ej], as in say or they. That’s why those have a ‹y› in our spelling today, and why sleigh has an ‹i› in it.

And unstressed /ɛ/ will soon enough go the way of all things, despite what bokeh enthusiasts would have you believe. (Same with the meh-sayers.) Because English phonotactics forbid an open /ɛ/ at the end of the word, those will therefore soon enough become either a phonemic schwa /ə/ — or else become a close vowel like /e/ or /i/ phonemically and so one with the characteristic falling phonetic diphthong [ej] or [ij] required by English phonotactics.

I therefore little doubt that the word currently spelled bokeh will end up /ˈbokə/ just like the boca heard in the city of Boca Raton, Florida, to rhyme with mocha.

The other two possibilities are for bokeh to wind up rhyming either with hokey or else with hockey. This would be like how Spanish chile which ends with /e/ becomes in English chili which ends in /i/.

Only if the second syllable became stressed could bokeh become /boˈke/ or more likely /bəˈke/, which is the sort of thing you get when in English you pronounce the Spanish word olé under English phonotactic rules.

Whatever happens to words like bokeh as they assimilate to English, they will need to be respelled to use a spelling similar to whatever words they end up rhyming with in order for them to be predictably pronounced by monoglot English readers.

Probably spelling what is now commonly rendered bokeh in English as boka would have been better from the get-go.

But first of all, what dialect of English are you talking about? There are many different dialects of English, and answers to pronunciation questions will differ among them. Second, which sound are you actually talking about? There are more than one 'e' sounds you could be referring to, such as /eɪ/ (as in "rein"), /ɛ/ (as in "bed"), and /ə/ (examples differ greatly among dialects).

Dan already pointed out a number of examples. Here are some more:

If you consider the same sound but not spelled with the letter 'e', then there are many more examples, including

This does occur, although admittedly uncommonly, since English phonotactics tend to discourage final or unstressed /ɛ/. Such words tend to be monosyllabic interjections. Here are some examples:

There are a number of borrowed words that may count, although some may pronounce them with /ə/ or /eɪ/.

There are plenty of such examples, including

There are some unassimilated loanwords (mostly from French) that have a non-silent e at the end, which usually retain an acute accent to indicate the unusual-for-English pronunciation. For example: blasé, café, cliché, fiancé, flambé, frappé, macramé, olé, protégé, risqué, soufflé, and touché. However, there is a tendency to dipthongize the /e/ to /eɪ/, so this may not count.

In first-language English pronunciation . . . are there any words with the /e/ (or /ɛ/) sound in "bed" /bed/ at the end of a word? [P]lease specify if they're limited to a certain dialect, region or accent.

Yes, there's kitteh, which is common in lolspeak. You can hear it pronounced here (in both American and British English) or here (I think maybe synthetically produced).

(Internet, neologism) A cat, chiefly in a lolcat type picture.

There are also a number of similar words, notably "itteh", "bitteh", and "committeh" as seen here: 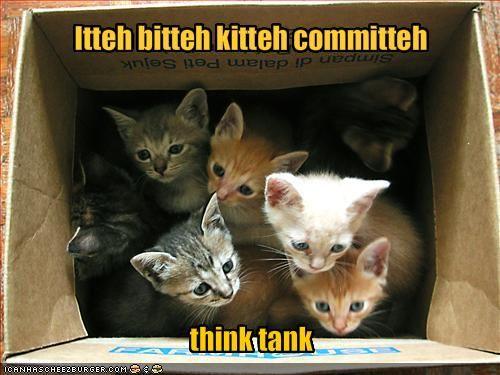 OK, that sounds like a silly answer, but I actually think there's more to it than first appears. Lolspeak is an online variety of English (digilect). Its exact nature is still being debated, including at ELL, but linguists have begun studying it more systematically and it does seem to rise above the level of individual slang words or something like Pig Latin. See, for example, Gawne & Vaughan, 2011 or Fiorentini, 2014.

More significantly for this question, some of these online conventions have crossed over into spoken English--my own kids use "OMG" (pronounced oh-em-gee) as an interjection much more frequently than "oh my gosh" or "oh my god" or similar. This phenomenon is also being studied, albeit primarily by younger scholars (many of the hits for "spoken lolspeak" in Google Scholar are for theses of various sorts, rather than published work).

In this context, the appearance of the apparently non-"English" pronunciation of kitteh, which is an English coinage, may suggest that a previously "impossible" word-ending sound has now become more natural for some significant portion of native English speakers as a result of an initially text-only trend.

I suspect that many of the folks who know the word "kitteh" would also know meh, feh, and heh--I have used all of these, which all rhyme. I take it from other answers here that meh and feh both come from Yiddish. Possibly "heh" in its internet sense does as well, or perhaps it is an English altering of "hah" modeled on those examples. Per Wiktionary (sense 2, which includes an audio clip), it is an interjection indicating "Weak amusement, sometimes signaling boredom."

Given these one-syllable examples, it may be that the language (or at least some speakers thereof) is evolving to also allow multi-syllable words such as kitteh to retain their terminal /e/ or /ɛ/ sound.

TL;DR: Among some sub-sets of internet-generation native English speakers, several words ending in the vowel sound of "bed" are in current use, including meh, heh and the (lolspeak) English coinage kitteh.

This is the nasal version of ɛ that, like the click consonants in 'tsk, tsk, tsk,' makes vanishingly few appearances in English.

These are both native English as far as I can tell.

They both rhyme with 'Gauguin' (Eugène Henri Paul) (in my dialect anyway) -- the sound ɛ̃ is part of the regular vowel inventory in French. Educated English speakers seem to invoke it often enough to at least pronounce words like 'Gauguin' half-way correctly.

Not the answer you're looking for? Browse other questions tagged pronunciation phonotactics or ask your own question.

9
Is lolspeak bad English, or just a different English?
7
Are there any words pronounced with an unstressed short monophthong at the end of word that are not /ə/?
1
Why is the pronunciation of French loanwords with the ending é botched?

49
Why is “primer” pronounced with a short “i” sound?
6
How to know how to pronounce an “-e” ending based on spelling?
6
Dialect “rules” and the pronunciation of individual words
5
Is there any English word starting with “gh” and “gh” is not pronounced as /ɡ/?
8
Why the does 'tu' get pronounced 'tyu' in British English?
1
Are there other words in American English that use the same vowel sound as the “as” in “Pasta”?
7
Yod coalescence across words - only with “you(r(s))”?