“School Students” — what, like there's any other kind of student?

I think this might be a Pennsylvania thing: every so often, you'll see a van or small bus labeled, not "School Bus" or anything sane normal like that, but "School Students". 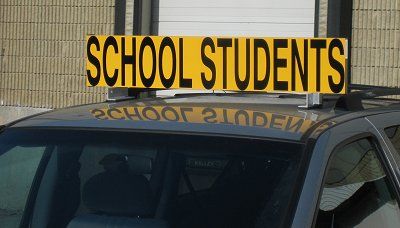 Whenever I see a van like that, I find myself wondering, school students? Is that as opposed to... ... uh... nursing home students? Courthouse students? Bacon students? I mean, what other kind of student is there?

Can anyone shed some light on this tautology? Is it a tautology? Does it sound normal to anyone who didn't grow up in Pennsylvania?

Yes, this sounds weird. You can come up with a lot of different kinds of students and stretch it to say they aren't technically in schools ("a martial arts studio isn't a school!" Or the abstract route: "I'm a student of life!"). But the underlying truth is that "School Students" isn't a specific enough category to actually give you any sensible amount of information. You don't know what kind of students they are, how old they are, why you need to know they're in the car...

Others have mentioned that it could be because if it only said "Students" you would assume the car was being driven by a student driver. Well... For one thing, I'm still not sure the car isn't being driven by a student driver. What reason do I have to believe that "School Students" can't be a shortened version of "Driving School Students"? There clearly isn't much room left on the sign. Also, even if you do assume that is what it means, I'm still not sure what the makers of the sign want you to do with that information. "There are students of an undetermined type in this car, but they're not student drivers!" What am I going to do differently with this extremely vague piece of information? I don't know if these are preschoolers, college students, kindergarteners... Literally the only thing you know, under this assumption, is that they aren't student drivers. Well, if the car hadn't had a sign at all, I'd probably have assumed that it statistically wasn't being driven by a student driver. So what is this sign telling me that actually helps anything?

Assuming the only logical intent anyone's come up with, which is that the car has young children inside and they are urging you to be careful, I don't think the sign accomplishes that goal. "Elementary School Students" would probably be too hard to read, especially while moving on the road. But you could easily go with other messages, like "Children Inside!" or "Watch Out For Kids!". Or honestly, you could go the most easily-recognizable route and just write "School Bus" on the sign. Yes, it is clearly a car and not a bus. But if a car says "School Bus" on a school-bus-yellow sign, I'm going to assume there are kids in a car and it's being used like a bus. It's not really a huge leap.

So, I agree with you that this is a weird and ineffectual way to get across...well...whatever message it is they think they're getting across. Because clearly we can't agree on what it's supposed to mean. I'm not 100% sure it's a tautology, but in the general sense I do agree it's unneeded. If it simply said "Students", the same (vague and unuseful) message would be conveyed. So it's definitely not necessary in this situation, at least.

what other kind of student is there?

I'll propose a blend of the other answers: Since the question mentions Pennsylvania, I'm answering in terms of American English (the only dialect I know ;-)

I guess that the author of that sign was trying to communicate, within a specific shape, a group or category for which we lack a conveniently short term. We have the broad category of 'student' but as Medica and others point out, that's a very broad term (with fuzzy boundaries) that covers a lot of people who, for safety and legal purposes, are not like the passengers of these particular cars and vans.

Keep in mind that as the text of the sign gets longer, the font has to get either narrower, or smaller, both of which reduce legibility at a distance. One of the constraints at work here (I speculate) was wanting to keep the text short enough that the letters could use the full height of the signboard.

We have nice two-word terms for "college student", "nursing student", "student driver", etc., but we don't have a shorter equivalent of "elementary or secondary school student", which I suppose is the underlying category. So, the sign's author made something up that (a) tries to narrow the category of student by excluding all the other common one- and two-word possibilities, while (b) effectively filling the available space on a sign that, if I know anything about bureaucrats, they had already chosen the size of.

The sign probably isn't meant to make it more clear what kind of students they are, (I think) it's trying to emphasize to drivers that there are children aboard, and that the drivers should be careful. Think: "students" doesn't really raise too many red flags in your head ("what are these students doing? what are they students of?"). "School students," for whatever reason, makes me think "danger! small children!"

I realise that in your part of the world, "school" can also include higher education. However, it doesn't in other parts. Here in the UK, for example, "school" means "primary and secondary education".

There are a number of other definitions on that page. I believe the one that is confusing you is this one:

2.1 North American • informal another term for university. Harvard is certainly not a loafer’s school.

Note that this specifically says that it is both North American and informal. In the rest of the world, talking about "going to school" or "school students" means the education system for children.

It's also worth noting that here in the UK at least, if you just said "students" you would be referring to university students. We don't tend to refer to schoolchildren as students at all - if we did, we'd specifically say school students to avoid confusion. Saying schoolchildren or pupils is much more common.

The following conversation I overheard a few years ago illustrates the confusion that using "student" to mean "school student" can bring.

(Cultural context: A-levels are qualifications gained at the end of secondary education, at age 18. You take 3-4 of them. Whilst you can do a degree in more than one subject, if you did it would be "Maths with Chemistry" or similar, not just a list; we don't "major" and "minor" in subjects.)

If the sign only said "Students," I for one would assume that it meant student drivers. If it says "School students," I assume just the opposite: that it has a professional driver, with children on board. The latter lets me know to expect stops, and for children to get on and off.

I don't think it's a tautology unless you connote student with school. I know all school students go to school, but not all students do; lots of learning takes place in other institutions.

Nursing students have the choice of attending programs in hospitals vs. colleges/university. I don't think of medical students as school students (even though they're in Med School) because they're essentially adults in a very specialized training program with little diversification (which is crap if you're a dental student, who often has to do two years of med school.) Likewise, though grad students are in grad school, it's hardly a school, and they are hardly your typical students. Student of the Arts. Student of Philosophy. A student of Blake. A student of History/Linguistics. A student of dance. A student of concern.

I guess having gone through so many different kinds of schools, and the need for lifelong continuing education to retain Board certification, has given me a different mindset regarding the words student, studies and school. So, to me, it's not a tautology.

As to why those signs are used, I think KnightofNi is correct. PA probably has that sign on non-buses carrying small groups of school students because it looks like the yellow and black school buses, and alerts other drivers to a similar level of respect that we have for the buses.

I don't associate student with school exclusively. And neither do any definitions I can find. The ones I list below are from the American Heritage Dictionary but more can be found in this link.

from The American Heritage® Dictionary of the English Language, 4th Edition

n. One who is enrolled or attends classes at a school, college, or university.

n. One who studies something: a student of contemporary dance.

n. An attentive observer: a student of world affairs.

My personal understanding of the word (which is supported by every definition I checked) is that student simply means one who is in the process of learning. It makes no suggestion about what institution, if indeed any, this learning is taking place in.

I should also admit that I speak an idiosyncratic dialect which may be influenced by my Philadelphia-born father but I have never even visited the place, let alone lived there.

Finally, the etymological approach also confirms my usage. Student derives from the Latin studiare via the Old French estudiant. The original meaning of the verb study was:

From c.1300 as "apply oneself to the acquisition of learning, pursue a formal course of study," also "read a book or writings intently or meditatively." From mid-14c. as "reflect, muse, think, ponder." Meaning "regard attentively" is from 1660s. Related: Studied; studying.

Again, nothing here restricts its meaning to schools.

I don't live in the US and I've never seen a similar vehicle in the UK, but after thinking about it for a bit, I believe nobody has understood the function of that large vivid yellow sign with school and students written on it. It is acting as a sign post, a visible form of identification for those "students" who need to be picked up and taken to school or back home.

I'd imagine there are agreed stops for those students, both children and teenagers, who cannot travel on buses (for whatever reason). Think of yellow cabs with Taxi written on a roof sign which can be illuminated. Like the numbers written on a bus, they inform the person/student who is waiting that they have arrived.

For the different and possible types of students this vehicle could carry, see @Jon Hanna's answer 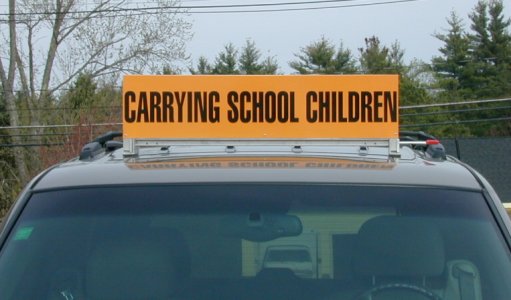 Whilst in Ohio signs will say, SCHOOL TRANSPORTATION, in Quebec: ECOLIERS, and yes, SCHOOL STUDENTS is a Pennsylvania thing. Source

Merriam-Webster consider a student to be someone who studies something. I consider myself to be a Student. So I do not consider the phrase to be a tautology.

Since it's Pennsylvania, the seeming redundancy is likely a heritage of the strong German influences in the region. German likes everything made explicit so there are a lot of phrases like "school student" in the language. The word ordering is also likely from German.

Not the answer you're looking for? Browse other questions tagged meaning nouns dialects collocation or ask your own question.