Is there a male equivalent of 'bitch'?

While I know you can attribute 'bitch' to a male, I feel there is a sense of femininity.

I was wondering if there is a colloquial equivalent that describes someone with the qualities of a 'bitch' without the feminine connotation.

Aside from that, Wikipedia says that,

When applied to a man, bitch is a derogatory term for a subordinate.

Does this indicate that bitch loses its meaning entirely when attributed to a male? Since the word is vulgar and informal, does it even matter?

As such, I would suggest dick(head), douchebag, wanker (mostly UK English), or prick.

These are all quite generic terms of abuse that don’t imply or focus on anything in particular about the person at whom abuse is being hurled (unlike, say, ‘idiot’ or ‘moron’, which focus on the target’s intelligence, or lack thereof), but are unlikely to be used towards women.

As noted in the comments, these can have more specific meanings than being just generic. If you say that someone is being a dick about something, that usually implies that they are acting in a condescending, obstreperous, arrogant manner. This nuance is absent if you simply use the words appositively to a pronoun, i.e., say “You dick!” to someone.

In most general sense, "bastard" can be an equivalent and it seems like the most universal term. (even in some other languages)

As in "You bastard!" versus "You bitch!". But there can still be different senses between them. It depends on the situation.

I even found passages that support my answer from publications of professional people.

From the book "Emancipatory Movements in Composition: The Rhetoric of Possibility" By Andrea Greenbaum (2012): 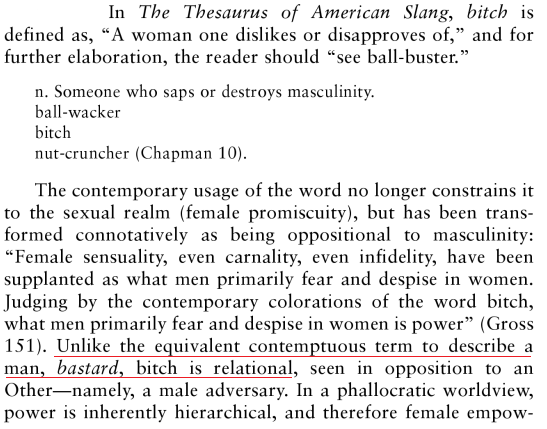 There is manwhore also for an equivalent of the original sense:

(slang) A man who sells his body for money; a male prostitute.

(slang) A promiscuous man who has no regard for his sexual partners or the emotional value of his relationships.

Note: This is more of an equivalent of "slut" in modern usage. Slut is even used for men sometimes.

Its original use as a vulgarism, documented to the fourteenth century, suggested high sexual desire in a woman, comparable to a dog in heat. The range of meanings has expanded in modern usage.

There is even the term "man bitch" according to urbandictionary. (Note: This usage is not common though.)

A man that acts like a bitch. Malicious, unpleasant selfish person; especially like a woman. Weak or comtemptible.

I think the opposite of bitch with the same connotation is a son-of-a-bitch. Not only are you telling the person that they are acting like a little bitch but also you are insulting their mom for raising them that way.

If you want something G rated then I would go with jerk or creep.

The best equivalent is dick, used in many TV series like this:

Usually implying that the person is selfish and arrogant.

I think bastard really really does it... to me it's the equivalent that describes a bitch in the female world ;-)

For a more literal opposite, "dog" could work (in breeding circles, "bitch" is a female canine while "dog" is a male canine). With the correct tone and context, it can mean a lazy or disliked person.

Tone and context are very important here, as "dog" when applied to humans can have many meanings. For example, it could refer to luck or fortune, rather than really being an insult:

Because of the multiple meanings, however, the same word can certainly be applied to both men and women. Used as an insult, "dog" applied to a woman generally refers to ugly appearance, rather than some other character trait (as it might if applied to a man).

They say she's a real dog.

While not necessarily a male equivalent of bitch, jackass can be a fine alternative to bitch.

In my opinion, jackass would be a likely candidate of the male form of bitch.

I don't think the word you are looking for exists because the meaning of "bitch" is embedded in the female gender norm. It describes a fairly specific type of behavior that is much more common in females; thus, it's impossible to act like a "bitch" without acting in a stereotypically feminine way.

It does mean different things when applied to a male or female.

A Bitch when referring to a female refers to a woman that is not friendly and acts selfishly, complains incessantly or is very insulting. "I just said hi and she snapped at me like a bitch." The specific male counter part to this in the United States would be dick.

A bitch when referring to a male refers to a man that is whiny or a coward. It is more of an emasculating insult. "That dude is afraid of spiders. He is such a bitch."

A bitch when referred to an inanimate object usually refers to something that is difficult. "Work today was a bitch".

There is not an exact equivalent, because "bitch" as an insult, at least in modern usage, is highly associated with gender norms. "Bitch" doesn't just refer to behavior; it also implies that this behavior is inappropriate because of the person's sex.

Ordinarily, a woman is described as a "bitch" when she shows specific traits: she is aggressive and outspoken. The insult indicates that the woman is not conforming to the gender roles she is expected to conform to.

If you want a male equivalent, there are two approaches you could take:

1) A man who is aggressive and outspoken might be called "in-your-face" or "pushy", or, at a pinch, an "asshole." But his behavior will probably not be described as negatively as a woman's, because society expects a different baseline of aggression from men than it does from women.

2) On the other hand, there are plenty of terms for men who violate gender norms. In that sense, you could consider words like "pussy," "fag," "wuss," or "queer" to be the male "equivalents" of "bitch."

In my opinion, an(other) equivalent word could be cur. It also refers to a dog, and I've also seen it used in a derogatory manner. Something like

although it seems a bit rougher/more impolite than "bitch" is nowadays.

What about pig? - a greedy, dirty, or unpleasant person. It has a sense of masculinity as well.

Not the answer you're looking for? Browse other questions tagged single-word-requests slang pejorative-language gender-positive or ask your own question.

10
What is a word for a man who has a lot of sexual relationships?
0
"Sl*t" term for males
2
The Word Bastard - Origin and Meaning