What is the origin of the word “What”?

Where does the word what come from?

Why do we say wot when it's spelt the way it is? 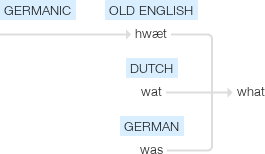 Old English hwæt, of Germanic origin; related to Dutch wat and German was, from an Indo-European root shared by Latin quid.

So I guess it originated from Germanic, used by Latin quid.

You can also find the brief history here, as how @oerkelens wrote in the comment.

Not the answer you're looking for? Browse other questions tagged etymology pronunciation orthography or ask your own question.

20
What was going on with “quha”, “quhat” and the like in Scots and English?
3
The pronunciation of “was” has changed since the Seventeenth Century. When and why did it change"?
1
Why is the word watch pronounced differently from words like patch, latch, match, catch, and batch?