The Ligustrum vulgare, the English Privet, seems to have a confused history. It was known to the ancient Greeks as an important plant in making their formal gardens or topia "places" which gives us the word topiary for which Ligustrum vulgare is well-suited. If you've ever cared for a privet hedge, you know that they need to be pruned very early in spring. Which fact makes the historical name primprint somewhat apt even if this etymology "first spring" is in dispute.

What seems to confuse things is a much earlier attestation to an English place name in the Anglo Saxon Chronicle. Pryfetes flode, now Privett, Hampshire. However, I think this is a false cognate. I have some Welsh ancestry and an old Welsh dictionary which lists Pryfydd as vermin-killer. I read elsewhere that the older meaning was rabbit-hunter, but I can no longer find that reference. Flode is a gulch. Why is there a place name in Hampshire with a Welsh name? Or is this not the origin of the name at all? Welsh rabbit-hunter's gulch? Is this a joke? I looked on a map and Privett is at a high point in the Chalk Ridge of South Downs not a gulch providing easy access to the great forest beyond. And in the Anglo Saxon Chronicle, a nobleman was thrown from the cliff whether to his death or to dispose of the body is unclear. Is this another example of the English poking fun at the Welsh their frequent object of derision?

Can anyone shed any light on the confused and entangled history of Privett, Hampshire and Privet, Ligustrum vulgare? I think they are unrelated, but separately interesting etymologies.

privet: Origin unknown. Compare later primprint n., prim n.2, and primp n., and also primet n. A connection between the present word and later private adj.1, privy adj. has frequently been suggested, but there is no evidence to support this.

Since the scientific name for the plant is easier to trace due to the obsessive nature of botany and herbology, I thought a good place to start would be to trace the source of when this plant got its name.

From the Theatrum Botanicum: The Theater of Plants : Or, An Herball of Large Extent: Containing Therein a More Ample and Exact History and Declaration of the Physicall Herbs and Plants ... Distributed Into Sundry Classes Or Tribes, for the More Easie Knowledge of the Many Herbes of One Nature and Property (Published 1640), it had this to say: 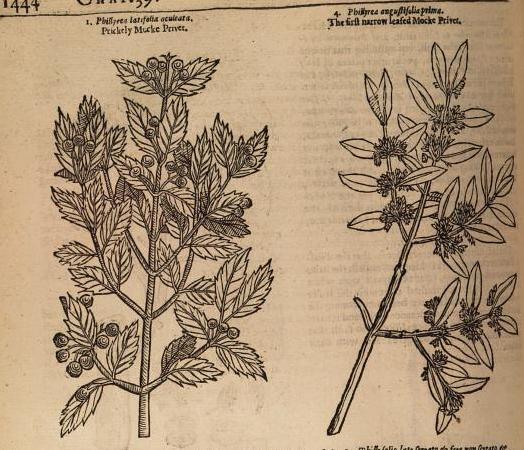 Through this we now know that as out 1640 the name had been established in the botany world.

However, searching prior to this time I've run into a snag. Most of it is in Latin (which I do not know very well. So, I decided to put it into Google Translate in hopes that I would get a rough idea of what they are talking about.

Pktonis Gorgias Ennij Besides the famous action against old age, there are four are common: first thatit substarcts from thing s[geredis]; second, that it makes the body weak: third that it subtracts from almost all pleasures of fourth, that it is not far from death.

Privet (in this case) seems to mean 'to take', or 'to deprive'. There might be some connection, but it's hard to tell at this point.

Curious, I went even further back in time to find where exactly did this word originate. If there was an origin I could look at. Suffice to say, when you go further than 1570, well, English ain't what it is today. 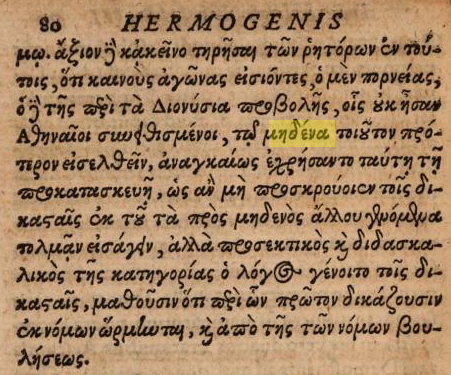 At this point I completely lost the plot because I was too fascinated with where I've gone that I completely forgot my initial intention in the first place. But why did I search for the common name instead of the Latin one? Truthfully? No idea. I just thought I could get further if I used that route.

One thing I did notice was between the term, name and word Privet/Privett there is a constant connection with 'iliad'. Many of the older books I've searched through had the two close words (iliad & privet) close together. Here's one from Thesaurus graecae linguae linguae, cui, conpingendo, additum est opus : glossaria duo... adutriusq. linguae cognitionem...perutilia. Item de atticae linguae seu dialecti idiomatis commentarium H. Stephanus by Henri Estienne ('Privet' is marked with the red arrow).