Complex sentence whose subject is a clause

In Thomas Harvey's Elementary Grammar and Compsition he says:

A complex sentence whose subject or predicate only is a clause, need not be separated into principal and subordinate clauses in analysis.

Later in the section he gives the example, "That he is very sick, is evident," parses the sentence, then gives a sentence diagram. 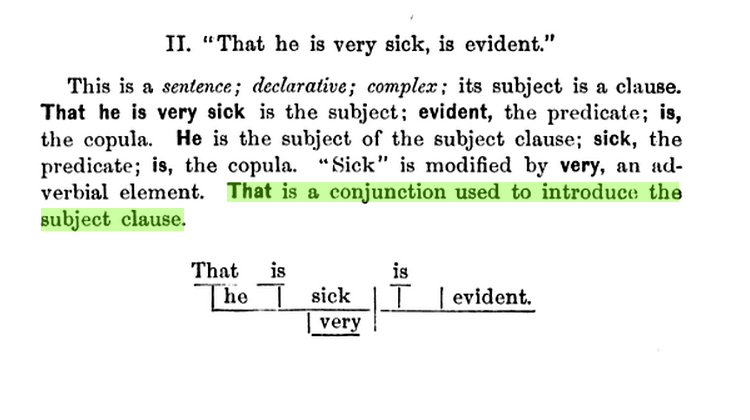 I'm curious how one would break this sentence into its principal and subordinate clause.

Nowadays, one way of parsing the sentence:

is to consider that the subject of the main clause is a subordinate clause in the form of a declarative content clause. In the below, the subject is in brackets and the main verb (or head verb) of the clause is bolded:

can be parsed as having the subject "he", the head verb "is", and the predicative complement as the adjective phrase "very sick". The word "that" is a marker of clausal subordination. That marker is usually obligatory when a declarative content clause is functioning as the subject of a main clause.

Hopefully this is enough for you to get a sense of how your example could be parsed in a modern grammar.

In a modern version of this construct, the sentence would probably include a grammatical expletive (viz., the it in It is very evident that he is sick), with the principal clause It is very evident preceding the subordinate clause that he is very sick (specifically, a restrictive relative clause).

Because many strict grammarians (especially in the days of yore) avoided expletive and passive constructions, this is just a stilted equivalent of It is evident that he is very sick. Your excerpt indicates that the clause That he is very sick serves as a special subject clause, being subsumed under the main clause as the subject itself. Under this interpretation, the construction is considered a simple sentence.

Not the answer you're looking for? Browse other questions tagged complex-sentences or ask your own question.