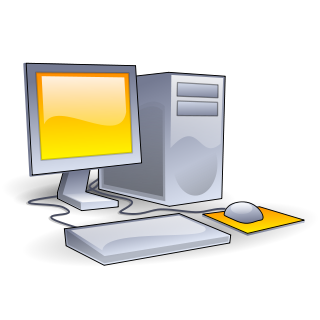 How would I describe the part of the desktop computer in this picture that isn't the monitor, keyboard or mouse? The part that contains the CPU, hard drives, CD drives, and other components.

That 'part' is the computer. The other devices you describe are peripherals connected to it.

If the form factor is a traditional, vertical case, as pictured, 'tower' is often used as well. And of course, if you're looking for a term specifically for the housing, well, that'd be the 'case'.

The outer box can be called any of the following:

Though most of the times, people would refer it by just chassis or 'CPU' which is technically incorrect but widely accepted.

An entire computer ... consists of:
a display, either color or monochrome;
a system box (processor, memory, disk drives, power supply, and communication interfaces);
a keyboard;
a pointing device, often a mouse.

It may also be called the [computer] base unit.

It is often referred to as a "tower".

In IT it will often be referred to as just box.

The problem with the term computer computer is that it's often used quite generally, and can refer to the whole system.

eg. 'There's something wrong with Sue's computer' - could mean that the mouse is faulty.

Whereas 'There's something wrong with Sue's box' explicitly tells us that it's something to do with the computer unit.

I've worked with computers a lot, and it's generally referred to (as @FumbleFingers said) as:

To what @Liamdev361 said: yes sometimes it can be called a tower, but strictly tower is just one form factor a computer can come in, the others being minitower, pizza-box, mini (e.g. Mac Mini), AIO (all-in-one), cylinder (2013 MacPro)...

To what @DavidM said: it is not the CPU. The CPU, motherboard (and many other things) are inside the system box, but isn't the CPU.

I would call it either the computer case / chassis or the system unit.

I've always known it as the 'chassis'. The peripherals (mouse, keyboard etc) and display unit/VDU/monitor connect to the chassis which is the 'box' which contains the actual computer hardware (the motherboard upon which the CPU and RAM is connected, storage media such as hard drives are connected etc). I have heard it also called the tower, the desktop (depending on form factor), base unit, 'the computer' and incorrectly CPU.

People will frequently refer to this as the CPU. While in strict terms, the CPU is the actual central processing unit (the chip that handles all the main functions), the case containing the unit is frequently referred to in the same way.

60
Etymology of the use of “Drive” to refer to a digital storage medium
5
Word for a laptop or desktop, but not a smartphone or tablet

6
Dispensing or dosing?
17
Is there a word for the action of lifting the mouse to go further?
2
What are the subject, verb, object, complement and adverbial all types of?
5
Word for a laptop or desktop, but not a smartphone or tablet
2
Better way to say keyboard/mouse combo
6
New term for “disk”
15
“Digital computer” in the 1940s
0
Word for an exhaustive description of something