Why is it called "slippery dick"?

It is a poor fish called slippery dick:

The slippery dick, Halichoeres bivittatus, is a species of wrasse native to shallow, tropical waters of the western Atlantic Ocean. 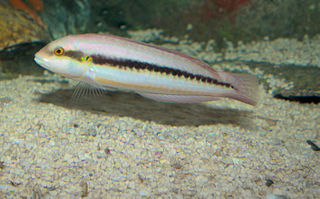 So how on the earth this fish is named "slippery dick" in English?

What is the origin of this name?

Note: I'm afraid that the answer would be the obvious metaphoric connection.

From The Christian Advocate (August 27, 1903), a publication of the Methodist Church in New York, excerpting an article from the New York Tribune:

A Slippery Dick at the Aquarium

One of the fish brought up from Bermuda for the Aquarium a couple of weeks ago was a specimen of the slippery dick. It is said that this name originated from the ease with which this fish slips out from one's hand when one seems to be sure of him. It surely is not due to his coloring, for he suggests a slice of Neapolitan ice cream, in that he is about six inches long and the thickness of the aforesaid slice of cream. From end to end run narrow bands of pink and chocolate and other delicate tints. Pink streaks, even more delicate than on the body, ornament his tail.

When the slippery dick was received at the Aquarium he was placed in the tank with the pugnacious beau gregories, and since then he has had need of all the supply of slipperiness at his command. They keep him moving nearly all the time. ...

This fish has its curious name from its ability to escape from the nets and pounds, or from the hand, by aid of its quickness in moving and its slippery surface. ... The inhabitants of the Bermuda Islands do not eat this fish because they have a superstitious belief that they will lose all their hair after doing so.

And from Russell Coles, "Observations on the Habits and Distribution of Certain Fishes Taken on the Coast of North Carolina" (1910):

The name "Slippery Dick" by which this fish is commonly called but faintly describes its slipperiness. Small eels would be easy to hold in the hand in comparison, as it can come just out between the fingers of a tightly closed hand.

Neither the Methodist Church editor nor the two scholarly fish experts show any particular interest in the "dick" part of the name, focusing instead on the "slippery" component. Presumably that lack of interest reflects the fact that most early-twentieth-century Americans understood dick as simply an informal version of the common name Richard.

Evidently the military meaning was at that time not widely known to the general public. Hence, Farmer & Henley report, the following lively phrase had only one meaning:

TO SWALLOW THE DICK, verb. phr. (common).—To use long words without knowledge of their meaning : TO HIGH FALUTE (American).

Mentions of "slippery dick" as the name of the wrasse go back at least to John Jones, The Naturalist in Bermuda (1859), whereas the earliest date that J.E. Lighter, Random House Historical Dictionary of American Slang (1994) finds for dick in the sense of "penis" is from 1888; on the other hand, dick in the sense of "a fellow, esp. if foolish or peculiar" goes back to 1553 and remained in occasional use in that sense throughout the nineteenth century, according to Lighter.

One appealing (but unlikely) source for the choice of "dick" as part of its name may be the fortuitous notoriety of a famously well-greased member of Boss Tweed's Tammany Hall ring in New York City, Richard B. Connolly. An uncharitable appraisal of Mr. Connolly in The Life of Col. James Fisk, Jr. "The Prince of Erie." of Miss Helen Josephine Mansfield, "The Erie Princess." of Edward L. Stokes, The Assassin, and of Hon. Wm. M. Tweed, Of New York, the Notorious Leader of the infamous Tammany Ring (1872) runs as follows:

The facility with which he made and broke promises, was his most marked characteristic, and so notorious did this practice become amongst his political associates that he was unanimously accorded the marked distinction of being the most unmitigated liar in the community, and the pantonymic by which he had previously been known, soon gave way to the appropriate and significant cognomen of slippery Dick. The man who first applied the term to Connolly was a consummate judge of human nature, and hit the most appropriate term that could be applied to him, for in every position where he has been placed, he has proven himself to be indeed a "slippery" and unreliable man, and so convinced of this did his cronies become that they allowed a long series of years to elapse before he was again put forward for any political position.

According to the Wikipedia entry for Connolly, he served in various offices as a Tammany Hall Democrat between 1853 and 1871, when he resigned as City Comptroller just before being indicted for 15 misdemeanors. Wikipedia says that he became known as "Slippery Dick" after becoming a member of the Tweed Ring in 1867.

But the 1859 source of "slippery dick" reports that island fishermen were responsible for adopting that common name. Still, there may be a connection between the slimy, evasive fish and a human being of similar behavior and temper: A surprising number of fictional and historical figures in the nineteenth century bore the familiar name "Slippery Dick."

This aggressive and carnivorous fish resides primarily in the shallow coral and rocky reefs along the Gulf of Mexico and throughout the Caribbean. Adults are easily identified by their cigar-shaped bodies, light green to white coloring with two black or dark purple stripes that run from the eye and pectoral fin to the base of the caudal fin. Like all wrasses, the Slippery Dick Wrasse may change sex depending on biological and environmental circumstances. No one seems to know for sure how this fish received its colorful name, although many speculate it probably had something to do with body shape and texture.

Really, if it was known, don't you think it'd be easy to find? Is it mucusy? Who knows. There are all kinds of strangely named creatures out there.

Not the answer you're looking for? Browse other questions tagged etymology terminology origin-unknown or ask your own question.