Is there a difference between "cheers" and "thanks" in colloquial British English?

In colloquial British English today you hear "Cheers" (to mean "thank you") more often than "Thanks."

Is the choice of one or the other determined by regional, class, or education differences, or is there some vague distinction in meaning or implication, or is this just one of those random things?

I have generated a small graph that plots my understanding of its usage here in the UK. I lumped class and education level together as, in this case, they probably roughly correlate. This will upset posh people as they know that class has nothing to do with where you went to uni, and will upset some educated people as posh people are all inbred thickies who only went to school for the rugger and the fagging. 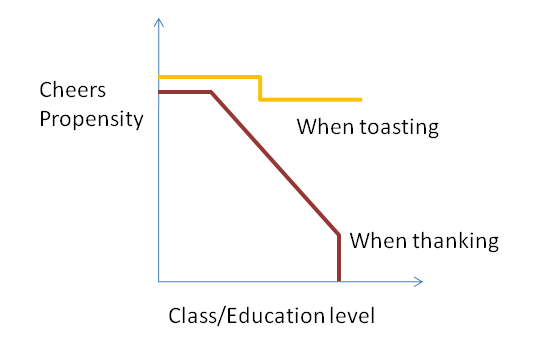 Things to note about the graph:

Two final things to note, are that it can also depend on familiarity between to the two parties conversing and the perceived formality of the occasion. If you know someone well, everyone is more more likely to use it. If you don't know someone at all, in informal conversation you can use 'cheers, thank you' as a handy catch all.

For a really good book on things like this, I recommend Kate Fox's Watching the English.

Personally, I think it's more usage than demographics.

But I can't think of circumstances where 'Thanks' would be considered too formal.

(These points are probably true of all colloquialisms.)

I can only speak from personal experience, but I never used "cheers" to mean "thank you" until I moved to the south west of England (having previously lived in London and the Midlands), where it seemed to be more common.

It's certainly not universal, though it may be hard to define exactly which parts of the country its used in, and by whom.

I'm not aware of any particular difference in meaning from saying "thanks", though it is perhaps less formal.

Additionally it is interesting to note that many people seem to use it as a kind of farewell greeting too (or in combination like "cheers, bye").

Here it sounds very much like the German "Tschüs" (which is the informal "bye" in German) - I could very well imagine that in a few decades this could lead to some etymological confusion... ;-)

"Cheers" is easier to pronounce than "thanks"; its second syllable just rolls off the toungue, rather than jarring like the "k" in thanks.

The laziness of man should never be underestimated.

I think it is funny that class has anything to do with it. I have heard it used as "goodbye" mostly from my British friends (all educated) who don't mind hanging out with Americans (also educated).

If memory serves, cheers was exclusively for toasting in the days of my youth. The secondary usage—as an expression of thanks—began to creep in during the 70s and 80s.

I first encountered it London but it gradually spread throughout the British isles, perhaps as a result of the popularity of EastEnders.

The advantage of using cheers both as a casual "thank you" and a "good bye" becomes obvious when shopping, as you can finish the whole process semi-politely with just one word.

In addition to IainMH's graph, it might be worth correlating a "mate/pal" line. "Cheers" is more likely to be accompanied by these, the lower the class. Cheers mate is ubiquitous here in Sfamptn (Southampton). This distinction of course stereotypical and luckily the class lines are blurring. Even my well educated boss uses "cheers, mate" a lot. Apart from that, the usage at my workplace tends to be as described for small favours, e.g. holding the door. Writing a huge chunk of code for someone else usually results in a thank you.

As a personal anecdote from my graduation: I remember the chancellor saying that he was surprised that only 11 students said "cheers, mate" when going for the handshake with him :)

I would be grateful if some could shed some light on to the differences to "ta" which tends to be used for small favours as well...

I spent many summers in Woking (Surrey) and "cheers" is pretty common in that area. For example, everyone said "cheers" to the bus driver when getting off.

If you have doubts about which one using, just go with "thanks" and you'll be fine everywhere.

I was raised in Britain but have been living in Canada and Seattle for the past few years. I wasn't much of a "cheers" person in the UK, but I've started using it in North America a lot... simply because the locals here expect and enjoy it from someone with a British accent!

The most prevalent use of it I remember from the UK is that one of my friends used to sign his emails off with it, i.e. "Cheers, Dom". He wasn't really thanking or toasting anyone, but I liked it a lot!

For advance notice, 'cheers' is common enough in the area I grew up and I still use it.

I'd call it 'casual' - not so casual that using it to the wrong person is rude, but casual in the same way that 'thanks' is more casual than 'thank you'. If I'm talking to someone older than me, that I don't know, and who is a woman, I'm more likely to go for the more polite term.

I work for an American retailer and while we mostly say thanks to each other, we've started using "cheers" more often as a quick way to say "thank you" for the little things... I also see it in emails between friends on occasion. It's simply a friendly, informal way to quickly yet politely close an interaction on an upbeat note. While its use here isn't rampant by any means, it doesn't raise eyebrows or come off as foreign to younger people up through about age 50. I never hear older Americans using it, however, except those who are highly educated.

Share
Improve this answer
answered Apr 16, 2011 at 16:41
user7482user7482
Add a comment  |
Highly active question. Earn 10 reputation (not counting the association bonus) in order to answer this question. The reputation requirement helps protect this question from spam and non-answer activity.

Not the answer you're looking for? Browse other questions tagged british-english colloquialisms or ask your own question.

20
Is "wot wot" or "what-what" an authentic British expression? If it's supposed to be mocking, what is it mocking?
27
Do accents still play a role in British class distinctions to the present day? How have things changed since the 1960s and Received Pronunciation?
12
Do Americans say 'cheers' to mean 'thanks'?
4
When a UK person says "Cheers" to me, what's the appropriate response?

12
Do Americans say 'cheers' to mean 'thanks'?
27
Do accents still play a role in British class distinctions to the present day? How have things changed since the 1960s and Received Pronunciation?
36
What is the difference between "English" and "British"?
5
What is the meaning, history, and current popularity of "of a Monday" (or Tuesday, or Wednesday, etc.)?
36
"have" vs."have got" in American and British English
29
How popular is the slang usage of "toss" in British English?