What do you call this man's skirt?

I've got an article of clothing I'm struggling to name.

They're typically worn by men in pictures from ancient Egypt. They look like a light fabric skirt.

I don't want to refer to it as a skirt because it would create a cross-dressing suggestion. I don't feel it's a kilt because it's made out of a much lighter material, maybe cotton.

What are these items of clothing called?

The item depicted in the picture is a shendyt. This is still, arguably¹, a type of skirt, and was usually made of linen or imported silk (for richer people). Using the term shendyt in your writing will probably imply having to explain what a shendyt is. It can be defined as a type of skirt — or a wrap around, belted, clothing garment covering the groin area and upper legs — worn by males during the Old Kingdom. Alternatively just use skirt, which with enough context should be understood.

Kilt might be another option, however you would still need to distinguish between the typical tartan kilt and the light ancient Egyptian linen version.

Loincloth doesn't really fit here since a loincloth is only meant to cover the genitals. Note that poorer people in Ancient Egypt might have worn loincloths, so the distinction is quite relevant.

¹ Reason for "arguably": the Oxford Dictionaries definition of skirt implies it is related to female use only; Collins' is less restrictive.

A skirt worn by a man is still generally referred to as a kilt.

While this term usually applies to the Scottish skirts worn by men, it applies in general as well.

Kilt comes from Scandinavian languages to Middle English meaning to tuck up around the body.

Egyptian kilts are generally called shendjyt (or shendyt), but in most references the word is followed by kilt.

Compare this to a loin cloth which is generally tied around ones legs and groin to cover to the genitals. 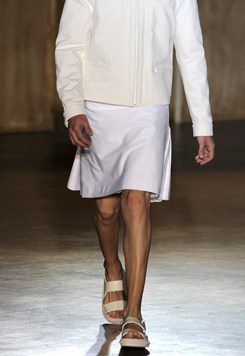 In the context of clothing, a wrap can refer to a shawl or stole wrapped about the upper body, or a simple skirt-type garment made by wrapping a piece of material round the lower body. Many people of both genders throughout the world wear wraps in everyday life, however, in the West, they are largely worn by women.

In fact you could call the Egyptian male garment a wrap skirt and be at the same time coherent, accurate and concise. In other parts of the world, men's wrap skirts are called differently.

It depends on the style and content of the piece you're writing. If it's a book or article about Ancient Egypt then you'd use the exact word that msam dug out, shendyt. But you'd still have to use the word skirt to explain what it was, at least on first use. But if the piece isn't about Egypt and you are referring to the garment only once, it would be best to take the short-cut and say skirt.

In Fiji, this sort of clothing item is called a sulu. There are two different types:

However, there is no gender bias to wearing one. Both men and women can wear them, although women do not generally wear a utility sulu.

See Skirts for men, or everything you always wanted to know about the sulu for more information about this garment.

There are no "man's" skirts by definition. The skirts is a male garment throughout the history, actually since thousands of years and it became a women's clothing too after a women cut her long dress in half. The Industrial Revolution made men wearing trousers because it was more practical for the hard work. During the Victorian era trousers became a men's garment and a kind of uniform.

I would call it a loincloth; that is, a cloth that covers the loins.

A loincloth is a one-piece garment – sometimes kept in place by a belt – which covers the genitals and, at least partially, the buttocks.

How about using the word tunic?