What does “head first” mean?

There are a serial programming books whose names begin with head first such as Head First Design Patterns, Head First Java, etc.

I'm not a native English speaker. What does head first mean here?

binderbound is right. This metaphor comes from swimming. You can cautiously wade into the water ... or you can dive in head first 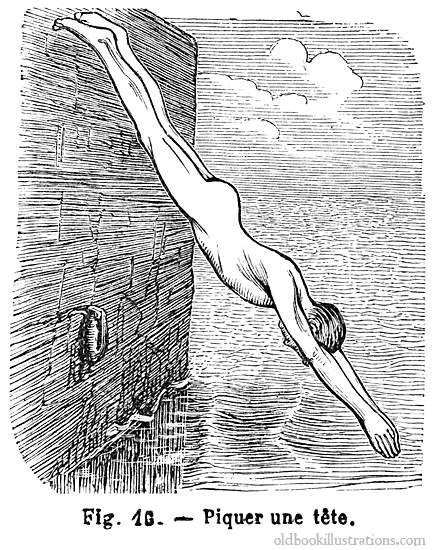 "Head first" in this case means you start putting theory into practice almost immediately. More generally it means doing something without hesitation, and it can also literally mean "the head reaching some point first".

In your case, your books mean to say that they will get you coding almost straight away, without long introductions to theory.

In computing, "head first" can also mean you code the declaration first -that is, rather than actually code logic on how to do something, you say "A piece of code called X exists/will exist" and come back to it later after you have finished declaring everything else. However, this usage is unommon, and I'm sure your books don't mean it in this sense.

You can see, in the explanation below, that the original authors of the first book in the Head First book series are focused on stimulating the readers' brain, neurons, and imagination, creating new mental pathways and connections, all using strong story telling and visualization techniques. This is all underpinned by a process called metacognition, which is a mind and knowledge related process.

So, Head First is a catch phrase that captures the essence of their technique, which is focused on the mind (the head).

This use of the phrase head first usurps an already well known phrase that has a different and often more literal meaning outside of its usage for this particular book series.

Here are the details:

Wikipedia has a topic titled Head First (book series). You have to first recognize that this has become part of a catchy title phrase chosen by the original authors, Bert Bates and Kathy Sierra, stating with their first book in the series, Head First Java in 2003.

They apparently chose this catch phrase to be consistent with their teaching concept:

The main idea of the series is to effectively stimulate the brain by:
- Telling stories
- Visualizing
- Using attention-grabbing tactics: page layout, non-standard examples, puzzles, jokes, and other means.

By using metacognition the series' authors and editors try to employ varied methods to present information and accelerate the learning process.

When you pursue the article further, you find a reference to Head First Labs, "where books of the series are presented and the main idea behind the series is explained."

You can go to their About page, where it says:

Learning isn't something that just happens to you. It's something you do. You can't learn without pumping some neurons. Learning means building more mental pathways, bridging connections between new and pre-existing knowledge, recognizing patterns, and turning facts and information into knowledge (and ultimately, wisdom).

On that same page, they also highlight some of their favorite books under the headline Brain Power, another head-focused metaphor.

Head First - Brain-Friendly Guides, and per Bert Bates (the creator of the series)

My goal with a Head First book is to write the book that I wish I'd had when I was first learning a topic.

The series tries to activate your brain before it can pump something into your head. It uses pictures and various other easy to recognize charts for easy learning. It could be named brain first to be more in line with diving.

The other answers are focusing narrowly on the meaning of "head first" in the titles of these books. The idiom is widely used without reference to cognition, to mean "enthusiastically", "without hesitation" or "energetically".

For instance, "Jane had never heard of the Canadian dish poutine, but the aroma enticed her to dive into it head first." It means that Jane ate it enthusiastically, not hesitating as many people might do with a new food.

Not the answer you're looking for? Browse other questions tagged expressions phrase-meaning or ask your own question.

4
What does “What use is X” mean?
1
What is the meaning of “head-poppingly”?
1
Can a bare infinitive verb as the first word of a sentence form a clause?
1
What does it mean when someone says “Don't call me ”boy“! ”
5
Is the expression “a first for my kind” idiomatic in this usage?