Where does "my ass" come from?

The usage of my ass to mean me is now relatively common. My impression is that it originated from AAVE and has since been included in various other dialects. The NGram below implies it became popular in the 70s:

However, that is only for the specific usage of save my ass and might not be representative of the general trend.

So, where does this come from? Does it in fact originate from AAVE or was it just popularized through it? How old is this usage and is there any etymological information on it? Specifically how/why did it enter the general vernacular?

Clarification: This is not about the phrase My ass! to express incredulity in the way expressed by My eye! but about my ass to mean me. As in She saved my ass, or You got my ass into trouble etc.

I watch a lot of westerns about cowboys in the old west (US). It seems to me that there are many references to saving hides (of cattle, also heads of cattle, another way to refer to the number of animals) and conjecture that it's possible that the expression "save my ass" started out as "save my hide". This is the NGram chart that shows the usage overlap:

According to this chart, "save my ass" started to gain in popularity when usage of "save my hide" began to wane.

The phrase my ass meaning me as a person seems to be closely akin to your ass when addressed to that person.

These phrases seem to be well established by the early 1950s when both Salinger (freezing my ass off [Catcher in the Rye]) and Jones (What if they threw my ass in jail? [from Here to Eternity]) used them in novels.

There are numerous early 20th century uses of the term ass referring to infliction of injury, many of which sound like attacks that would not be limited to the buttocks. It may be that, as kicking one's ass came to refer to a triumph over the entire being, the use of ass to refer to that being slid into common usage.

As an aside, the use of a part to refer to the whole is an example of synecdoche.

The concept of referring to whole people by various body parts is nothing new in the English language.

Deck hands.
Counting heads.
Another pair of eyes.
Every swinging dick in this company . . . (See the movie Heartbreak Ridge to hear this many, many times.)

Self-reference to one's ass or someone else's ass is just an extension of this principle.

It seems likely that the first usage of ass in this sense was Get my ass to ... Literally, to transport one's ass (and presumably the rest of them) to another location. There are other variants of this as well: Get your butt in gear. Get your feet moving. etc.

As to it's prevalence here is an NGRAM including many of the variants and common phrasings click to enlarge, there is a clear spike of both uses from the 1940s, and, including them in phrases like get your ass spiked in the 1960s. So, it seems like the usage began to go up around the major wars fought by the United States in that time period. (The Korean War and Vietnam War.) 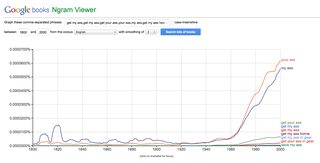 I've always thought it came from phrases like "protecting my ass", "watching my ass", and so on, phrases that imply that you're in danger of having your ass kicked by someone above you in authority. In that context it made sense, but gradually its use was extended until it could be connected to just about any verb: "They're gonna promote my ass", "We're gonna sue their asses", "get your ass over here", etc.

I'm sure that my ass as to mean myself has taken and continues to take many forms across history.

To begin with a typical example:

I need to make sure my ass is on time for work.

Let us note how this differs in effect from something like:

I need to make sure I am on time for work.

Firstly we'll note that the former differs from the latter in that it creates the abstraction of my ass as seperate from I ... furthermore we note, as an effect, the use of third-person via a subject-object relationship where the object, my ass, is related to I/me in such a way as to triangulate a third abstraction which goes unnamed.

I did not have sexual relations with that woman.

The intention of this wording is to indicate that the speaker is so far removed from "that woman" that the use of her name, or anything less vague than "that woman" at all, would be unnatural for the speaker. Of course, this is a technique of manipulation in speech.

Sometimes, the strategy that opposes Distancing Language is referred to as Inclusive Language. Much more information on these topics can be found by searching obvious channels.

But not all implementation of language to distance is manipulative, in fact, it can sometimes be playful. And that is what we see with an expression such as my ass when used as a replacement for myself.

You really saved my ass.

This achieves at least two effects: one being the communication of distance from the situation in which one found oneself, and two being the invocation of intensity. The idea my ass isn't simply me while i'm not particularly consciously aware or interested - in addition, it is me while i'm unable to protect myself as somewhat synonymous to the slang phrase my back (although the two are not interchangable; a friend may have your back but a friend may not have your ass in the same way).

To address your graph and potential relation to African-American Vernacular English: I doubt any correlations uncovered around that idea will be as potent as the rise of post-modern aesthetic during the 1980s and through present day. Self-referential artwork and media have become not only commonplace but expected.

And the phrase in question is a great example of the post-modern phenomenon's manifestation in slang English vernacular. The pull to utilize self-referential effects is so powerful that even my ass feels compelled to go ahead and do so.

"ass" has two meanings: 1 It is an animal, a donkey, in Latin asinus. 2 It is a substitution fore "arse", which is felt to be too vulgar to use it. And , of course, "ass" can mean the behind, ie a special part of the body and it can stand as a special pars pro toto for the whole body or person.

And there is the special idiom with "my": My foot/My eye/My ass! which all mean the same: Nonsense!

Not the answer you're looking for? Browse other questions tagged etymology expressions history african-american-vernacular-english or ask your own question.