I don't get what this phrase means. I tried googling it, but the answers weren't satisfactory.

Could someone please tell me its meaning? I'm guessing it has something to do with TV shows (I first saw it here: in the Urban Dictionary.)

It refers to a previously well-regarded series (of films, television shows, books etc) suddenly including a very strange or illogical event. Such an event is often interpreted as an indicator that the series has lost its way and declined in quality.

The name comes from a scene in the fourth "Indiana Jones" film, "Indiana Jones and the Kingdom of the Crystal Skull", where Indiana survives a nuclear explosion by sheltering within a lead-lined refrigerator. This scene was seen as being unrealistic even within the world of the story, not least because refrigerators are not usually lead-lined (even in time-period of the story). (The relevant scene is here: https://www.youtube.com/watch?v=Arib8uWMWsM)

An earlier idiom for the same concept was "jumping the shark", from a scene in "Happy Days".

Nuke the Fridge Con is a sponsor of comic book/media "conventions". The show itself usually occurs twice a week - on Wednesdays and Saturdays - making it more of a collectibles swap-meet/flea-market than an actual convention.

The TV/Movie trope, Nuke the fridge means when something so ridiculously unbelievable happens in a plot that the whole thing is marred by it; it's downhill from there. Know Your Meme explains that “Nuking the Fridge” is an idiomatic phrase used by movie fans to describe the declining point of a film franchise as a result of its heavy reliance on special effects.

According to Newsweek, the phrase was first used on the IMDB message board for Indiana Jones and The Kingdom of the Crystal Skull on May 24th, two days after the film’s release. Fans were disappointed by a highly unrealistic scene wherein Jones escapes a nuclear explosion unharmed by hiding inside a refrigerator.

On May 25th, 2008, the website Nukethefridge.com (featuring video game and action film news) was created. On June 4th, SlashFilm.com published an article titled “Is 'Nuke the Fridge' the New 'Jump the Shark'?” referencing the common phrase to describe the point in a TV show’s run when it started to go downhill.

Frying the Coke (three main characters hide behind a Coke machine to survive a fiery explosion.) 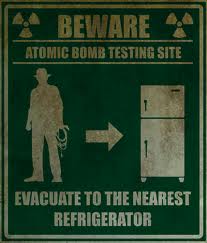 Not the answer you're looking for? Browse other questions tagged meaning idioms american-english or ask your own question.

9
What is a word or phrase for when an artist cannot live up to his (or another author's) earlier work?