When was "antimatter" first used?

When was antimatter first used? Who was the person that used it?

Schuster is credited with coining the concept of "antimatter" in two letters to Nature in 1898. He hypothesized antiatoms, and whole antimatter solar systems, which would yield energy if the atoms combined with atoms of normal matter. His hypothesis was given a mathematical foundation by the work of Paul Dirac in 1928, which predicted antiparticles and later led to their discovery.

Here's a scan of his letter, headed Potential Matter.—A Holiday Dream, which was published and referred to in several other 1898 publications.

Here's a couple of pertinent snippets from his letter: 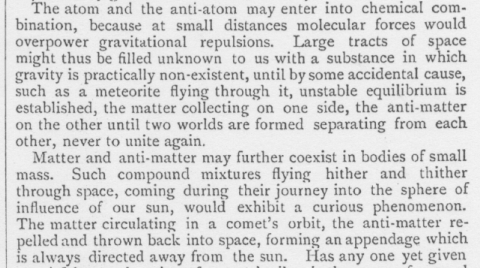 The atom and the anti-atom may enter into chemical com-
bination, because at small distances molecular forces would
overpower gravitational repulsions. Large tracts of space
might thus be filled unknown to us with a substance in which
gravity is practically non-existent, until by some accidental cause,
such as a meteorite flying through it, unstable equilibrium is
established, the matter collecting on one side, the anti-matter
on the other until two worlds are formed, separating from each
other, never to unite again.

Matter and anti-matter may further coexist in bodies of small
mass. Such compound mixtures flying hither and thither
though space, coming during their journey into the sphere of
influence of our sun, would exhibit a curious phenomenon.
The matter circulating in a comet's orbit, the anti-matter re-
pelled and thrown back into space, forming an appendage which
is always directed away from the sun. Has any one yet given

Astronomy, the oldest and yet most juvenile of sciences, may still
have some surprises in store. May anti-matter be commended
to its care! But I must stop -- the holidays are nearing their
end -- the British Association is looming in the distance; we
must return to sober science, and dreams must go to sleep till
next year.

Doing a little research in Google books, Dirac in 1931 wrote "We may call such a particle an anti-electron," in his paper "Quantized singularities in the electromagnetic field." However once the anti-electron was actually discovered in 1932, naming rights went to Carl Anderson, the experimentalist who first observed them, and so Dirac started calling it a positron.

The prefix "anti-" used in this context seems to have disappeared for awhile, but reappeared in the years 1937-1939 when we see references to anti-neutrinos and anti-particles (hyphenated at first), and the terminology seems relatively common in the scientific literature by the early 1940's. The first time I can actually find the word anti-matter used in this context is in the 1948 book Cosmic rays and nuclear physics by the physicist Lajos Jánossy, where Google books gives me the snippet view

The other type of matter might be called the "anti matter." In collision the two types of matter would annihilate each other and give rise to intense radiation.

The context suggests that this may actually be the first use for this meaning.

The equation, in some way, predicted the existence of an antiworld identical to ours but made out of antimatter. Was this possible? if so, where and how could we search for antimatter? — http://www.google.com/search?q=antimatter+etymology+history

Looks like it really started to be used in the middle of 1950s.