Usage of the word suicide - validity of 'suiciding'

Is 'suiciding' a valid word by itself? I have very rarely come across suicide being used in this form. Mostly, you see it being used with the prefix 'commit' as in 'committing suicide' rather than 'suiciding'. (The dictionary editor flags the words 'suiciding' and 'suicided' in red anyway!) I want to know if it is valid but very rarely used, or if it is wrong altogether.

The reason the word is not often found as a verb, is that the -cide in suicide, like patricide, matricide, infanticide, fratricide, etc, is not a verb to start with, but a noun derived from a verb. Verbing does not seem to make a lot of sense.

etymonline says the following for -cide:

If it is understood that -cide means killing or killer, it is not strange that it is not normally used as a verb.

However, users of English have a tendency of verbing their nouns, even if that may not go down well with many other speakers.

In this case, the verbing of suicide would be similar to verbing "killer" as "I killered you" or possibly "a killing" as "I killinged you".

It certainly explains WS2's reaction, and honestly, I would use it either. Since dictionaries record how language is used, and since (sadly?) enough people have no scruples about "killering", it has become an established (if marginally) verb, at least according to Merriam-Webster.

That a verb is in a dictionary does not mean you are obliged to use it though! :)

Having been one who made an early caustic comment on this matter, and notwithstanding @oerkelens well articulated and informed answer, above; I feel bound to mention that the OED points to a long tradition of 'suicide' having been used as a verb, dating from 1840. See below, including the gruesome ironic twist in the second section. Etymology: < suicide n.2 Compare French se suicider. Thesaurus »

According to Merriam-Webster suiciding is a verb, as is suicided.

The following NGRAM should show the relative usage of it as a verb. (Extremely low!) 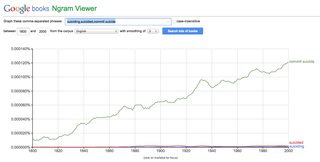 Suicided as it is used today is a relatively new word to the English language. What it means is that someone was bullied to the point that they took their own life. Example: "Aaron Swartz was suicided by the U.S. Department of Justice."

"After Swartz's death, the prosecution has come under scrutiny and not only from his family and supporters. MIT's president appointed a professor to lead an investigation into the school's role in Swartz's case and several lawmakers are demanding answers from the Department of Justice on its handling of the case." http://mashable.com/2013/02/05/aaron-swartz-girlfriend-why-he-died/

Not the answer you're looking for? Browse other questions tagged word-usage verbs progressive-aspect ing verbing or ask your own question.

3
Transitive use of suicide

2
Can we determine a proper verb form of “exegesis” for Biblical scholars to use?
1
a word for questioning the validity
13
Is “pronunciate” a word?
0
Can “recount” in the sense of narrating a story be used as a noun?
0
Usage of the word “introspect”
5
Fictional usage of “drone” to mean “worker” in the context of a eusocial species
2
The usage of '-ing' and '-in' in writing