In Arthur Conan Doyle's The adventure of Black Peter, Watson casually refers to a previous exploit of Holmes:-

In the memorable year '95 a curious and incongruous succession of cases had engaged his attention, ranging from this famous investigation of the sudden death of Cardinal Tosca...down to his arrest of Wilson, the notorious canary trainer, which removed a plague-spot from the East End of London.

According to Green's Dictionary of Slang a canary might be

among other less-likely definitions. So it seems possible that a canary trainer was a brothel-keeper.

Online I turned up The Canary Trainer, a Sherlock Holmes pastiche, revolving around Opera singers, which doesn't seem to fit in with the previous definitions. I realise that actress and harlot were pretty nearly synonymous in Victorian times, but don't think the same stigma attached to opera singers, in which case training of singers can hardly be said to be "a plague-spot".

So, does anyone know what a canary trainer did?

I apologize for the tardiness in answering, but sometimes a person needs time to reflect and for that eureka moment to occur :) What I offer is not the answer as to who was Watson's Notorious canary trainer, which the Op didn't in any case ask for, but rather a fuller and more complete explanation of what a canary bird trainer does.

If like me you believed a canary trainer was somewhat synonymous with an ordinary breeder or someone who taught canaries to perform and sing on command, you sadly underestimated the complexity and importance of his role. It seems that in order for canaries to produce the most pleasing and sweetest of song, they have to be bred and instructed carefully, they can even be taught to sing a particular tune or melody.

In The Canary Handbook by Matthew M. Vriends, Tanya M. Heming-Vriends, we're told that Canaries were discovered to be excellent mimickers and the Germans (especially) exploited the bird's natural talents. Special automatic musical instruments were made which mimicked the voice of the canary — and these were played continuously to young cocks until they also had mastered the song. These canary breeders soon realized that each bird was unique, and had its own particular tone.

Birds with the most mellow or musical tones were selectively bred to produce cocks with even better songs. Some of those with the best songs were then used to train young cocks, so that the talent could be used in two ways. Indeed, some of the birds were sold exclusively as trainers, others as songsters. [...]
It is not difficult to breed canaries, but to produce fine, prizewinning singing canaries is a question of expertise, dedication, and ongoing enthusiasm [...] Every young cock must be trained before he becomes a useful and calm singer. The training begins during the breeding in the nest and continues in the singing cage. Source

... the extraordinary fashion in the 18th and 19th centuries to train birds to sing popular music on command. Bullfinches, linnets, canaries and other songbirds were taught popular tunes as well as songs written specially for birds. Once trained, these songsters were used as primordial, feathered music machines, delivering music in people’s homes, 100 years before the arrival of the phonograph and the advent of recorded sound. Source

So now onto why Sherlock Holmes's canary trainer was called notorious. I suggest two hypotheses, the first is related to the trading and exportation of these songbirds. The demand for these highly trained songbirds, such as Goldfinches, linnets, blackbirds, thrushes and nightingales steadily increased in the 18th and 19th century, among the upper and middle classes, and lasted until the early 20th century. Furthermore, in the US the demand for these delicate and charming caged birds was quite considerable. In a book entitled Canaries: Their Care and Management by Alexander Wetmore, 1923, it states

I suppose American buyers would have ordered only from the most reputable breeders, but I wouldn't be surprised if some of these canary birds on their arrival couldn't sing (only the male species can sing); were ill-kept and consequently suffered from diseases; or just sang "poorly". An easy trade, and an easier way to swindle and cheat customers who lived many thousands of miles away.

My second hypothesis is connected to the East End of Victorian London, a notorious breeding ground for petty crimes and the mistreatment of domestic animals if ever there was one.

During the 18th century the trade for singing birds was unique to the area of London, it being said that "Londoners would buy anything with a beak and a tail". A new profession was born, that of bird-catchers And as the 19th century progressed, so too the demand for cage birds.

Here is an extract taken from The Art and Mystery of Song-Bird Torture by James Greenwood, 1874. A writer and social journalist for the London Daily Telegraph in the 1860s.

IN all my spring morning experience of country rambling, I never before had heard such distinct and emphatic bird-music, crisp, sharp, and ringing out at regular intervals, as though the tiny creature from whose throat the sounds proceeded was actuated by duty rather than pleasure. No wasteful and extravagant flourishes of melody - no whimsical jumble of notes short and notes long, with wanton twitterings between, such as a free bird among green boughs delights to indulge in by way of demonstrating what a happy and independent fellow he is ; but a shrewdly calculated and systematic performance, as though after every renewed effort, he wound himself up for the next, and was bound to deliver himself to the instant of a certain quality and quantity of music, as per contract.

The London journalist discovers that the songbird, who travels in a parcel, belongs to two bird-catchers. He ventures to make their acquaintance and discovers to his horror that the finch has been deliberately blinded by one of the bird-catchers. It was common belief at that time that the darker the singing birds' environments were, the better they sang 1, as a result many "breeders" permanently destroyed their songbirds' eyesights with red-hot needles or wire. The sightless finch is used as a bait, and as the story unfolds we learn more about the ingenious technique employed by the unscrupulous bird capturers. Greenwood continued investigations lead him to the bird market and animal shops in Sclater Street, where he describes in detail the appalling and abysmal conditions the jailed birds were forced to endure. 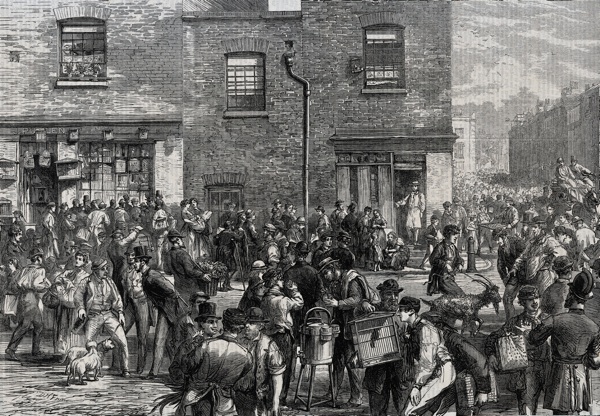 Did this have anything to do with the "notorious" canary trainer? Was he by chance from Shoreditch, East London? Was he a bird dealer, trader and trainer? Could his shop be the plague spot which Watson refers to?

Finally, one more anecdote which convinces me further that Arthur Conyan Doyle's Canary Trainer was not an euphemism, or slang term for a unsavoury or immoral profession, but as @slam suggested, a man who trained canaries to sing.

At the turn of the century of course, things were so different, bird fanciers would gather and compare notes with fellow fanciers, and acquaintances, and to show off their birds. Canaries were a popular favourite, and there were allegedly some 'dodgy dealing' going on, when certain dealers would paint, or dye a common bird yellow, and pass it off as a canary.

On Sundays, the little shops were inundated with trade in birds, but it was during the week, when their real trade took over, and people would travel from all over the country to visit the yards and stables at the back of these shops, where the most exotic animals imaginable could be purchased, from African lions, Indian elephants, various apes, boa-constrictors, giraffes, zebras, even Polar bears.

Regarding The Canary Trainer:

Holmes... was also an accomplished violinist. Following his discharge from therapy with Sigmund Freud, ...we now learn that he journeyed to Paris and there found employment as a pit musician at the Paris Opera.

...Its opera house is full of surprises. First and by no means least is the sudden reappearance of the great love of Holmes's life, an accomplished singer from Hoboken, New Jersey. ...Holmes is commissioned to protect a vulnerable young soprano, whose beautiful voice obsesses a creature no one believes is real, but whose jealousy is lethal... (sound a bit like Phantom?)

My guess is that the canary is a singer, and the trainer is the villainous "Opera Ghost" who orchestrates bizarre and nasty events, and has Phantom-of-the-Opera-like control over one of the girls (training her to sing, no doubt.)

(added) "[Holmes is contracted] to protect soprano Christine Daa‚ (who's so innocent that she believes the mysterious singing master who calls himself ``Nobody'' is the Angel of Music." (from the Kirkus review)

The only problem I see is that your quote states "...his arrest of Wilson, the notorious canary trainer, which removed a plague-spot from the East End of London." The plague spot could be the murders...Could there be more that one canary trainer? Since the quote came first... Hmmm.

Today (and for decades) there has been a group of dedicated Sherlockians calling themselves The Notorious Canary Trainers. They have tried to tease out details of this mystery (only mentioned in that one Doyle story). Their theory:

The Oxford edition of the Sherlock Holmes accounts suggests the reference to a "notorious canary- trainer" in Black Peter "may have been inspired by an article in the Strand on "A Phonograph School for Parrots" (Aug. 1903) about a parrot-trainer in Philadelphia who used phonographs to train birds to talk."

"Owen Dudley Edwards (The Quest for Sherlock Holmes, 1983) suggests that the name could have derived from Patrick Wilson (the pock-marked schoolmaster of the Newington Academy in Edinburgh, where ACD (Arthur Conan Doyle) was a pupil in 1867-8) taken in conjunction with the Christian name of Black Peter's killer."

The New Annotated Sherlock Holmes discusses what this occupation could have been from contemporary sources. Their guesses are:

It appears that a lot of effort has been expended in trying to solve that one tossed-off reference to the Notorious Canary Trainer. If they can't figure it out, I wouldn't bet on myself doing so, either.

Henry Mayhew's 'London Labour and the London Poor' v.3, under 'Exhibitors of Trained Animals' interviews a street entertainer whose act features highly-trained canaries. The man emphasised they could be trained only with great gentleness. ("I use two things to train them - kindness and patience, and neither of these two things can be stinted.")

Perhaps Doyle meant just what he said? He was implying an amusingly incongruous connection of ideas - that someone as harmless as a man who trains cute little singing birds is also a master criminal/serial killer/white slaver/(insert crime of choice) on the side?

I love all these theories - but couldn't the line be meant fully literally? First of all, some Googling reveals both that canaries can get the plague, and that they can have fleas. So it seems perfectly possible that an unscrupulous canary trainer, with overcrowded and sick birds, could become the source of actual plague in the surrounding neighborhood.

And if we imagine that the word "plague" could have been used in it's more generic sense - any fast moving, highly virulent, possibly deadly disease - it could have been a reference to any one of a number of diseases that pet birds - and especially their feces - can spread to people. 10 such diseases are described at https://www.thesprucepets.com/can-my-bird-make-me-sick-390445.