Word that means "recognizing that something is 'a thing'"

I once read a story about a Navy man who, due to a bad childhood, never learned what emotions were. To him, there was no "angry", "happy", or "sad" — it was just "intense" and "not intense". Although most of us can differentiate between our feelings, there are many other such events in our daily lives that we experience, but don't necessarily have the language to talk or think about. For example:

In each of these cases, once you know the trick, the explanation seems obvious in retrospect. How could you not know what "happy" feels like? How do you not recognize saltiness? But when you're in a position where you don't even know that you don't know something, it's easy to miss patterns among the noise. There's simply no conceptual foundation for you to grab onto.

Is there a word that means, roughly, "taking something that was once understood in only a nebulous, ill-defined way, and acquiring the core concepts and vocabulary required to understand and talk about it specifically"? Or, more simply put, "recognizing that something is 'a thing'"?

Moreover from "Dictionary of Philosophy" by Dagobert D. Runes:

apperception is "the process by which new experience is assimilated to and transformed by the residuum of past experience of an individual to form a new whole."

In short, it is to perceive new experience in relation to past experience.

"the introspective or reflective apprehension by the mind of its own inner states."

'Reification' means exactly 'considering something to be a thing'. The verb is 'reify'. NB they are pronounced 'ree-ification' and 'ree-if-eye'.

Cogniscence I think best describes this but other synonyms like recognition and realization are somewhat valid as well.

This is similar to Donald Rumsfeld's Known known's quote which is a total classic in my opinion but he similarly had a hard time putting it into words that other people could grasp.

(Rather surprised this hasn’t been suggested in any of the earlier answers.)

Conceptualisation (or -ization if you prefer) fits several aspects of your examples very well. From the OED:

"Enlightenment is education or awareness that brings change, such as your enlightenment about nutrition that leads you to throw out every last bit of your family's junk food."

Grok was jokingly(?) suggested as a comment, but I think it describes what you are after perfectly.

Definition of grok: to understand profoundly and intuitively

Your criticism is that

"(...)grokking, though, [implies] that you already knew that you didn't know something. I think the word I'm looking for is more about dealing with unknown unknowns."

However, your examples, and specifically the definition

"taking something that was once understood in only a nebulous, ill-defined way, and acquiring the core concepts and vocabulary required to understand and talk about it specifically"

describe something that was previously recognized as extant but not understood in a nuanced way. Grok describes this process of transforming understanding.

I think the reason why it's hard to define this word traditionally shows in the fact that an invented word seems to have gained some foothold in some communities (see StackOverflow).

EDIT: Upon rereading the question at hand, I realize there is a dissonance between your two definitions. "Understanding something in a nebulous, ill-defined way" does not mean the same thing as "don't realise that a thing is 'a thing'". This answer corresponds to the former definition.

There might be a single word somewhere for your scenario, but I don't know it. I can offer a few related words, but they would not describe the person.

People with severe autism feel emotions similarly to your example. They have difficulty, however, in processing them. They feel intensely or less intensely, but they have difficulty in differentiating between emotions: happiness, sadness, frustration, desire, etc. Their emotions are unprocessed (not altered from an original or natural state) or undifferentiated (not made different by alteration or modification).

The same can be said of any level of understanding: of language, culture, self-insight, etc. Their understanding is unsophisticated (lacking experience or worldly wisdom; marked by a lack of refinement or complexity; unadulterated or genuine), primative (not derived from something else; primary or basic.), rudimentary (of or relating to basic facts or principles; being in the earliest stages of development), elementary (of, relating to, or involving the fundamental or simplest aspects of a subject), or basic/childlike/naive/a naif.

You can find more synonyms here.

Qualia is a term used in philosophy to refer to individual instances of subjective, conscious experience. The term derives from a Latin word meaning for "what sort" or "what kind". Examples of qualia are the pain of a headache, the taste of wine, or the perceived redness of an evening sky.

This article describes qualia in terms of the experiential properties that add depth or dimension to one's understanding of their surroundings:

Qualia are the subjective or qualitative properties of experiences. What it feels like, experientially, to see a red rose is different from what it feels like to see a yellow rose. Likewise for hearing a musical note played by a piano and hearing the same musical note played by a tuba. The qualia of these experiences are what give each of them its characteristic “feel” and also what distinguish them from one another. experienced color will be able to know everything there is to know about that experience.

Qualia differs from awareness: Awareness is the state or ability to perceive, to feel, or to be conscious of events, objects, or sensory patterns. In this level of consciousness, sense data can be confirmed by an observer without necessarily implying understanding.

Cognition may be a more colloquial word, rather than qualia, depending on who your audience is:

Cognition is the process by which the sensory input is transformed, reduced, elaborated, stored, recovered, and used. This may be an intermediate stage in the spectrum of between qualia and basic awareness

I would go with discriminate under one of its meanings

I also think apperception is a good one.

"Comprehension" may be close to what you're looking for.

Thomas Kuhn's seminal The Structure of Scientific Revolutions created a big stir in the sciences, both hard and soft, when he suggested in his book that the Copernican revolution, for example, occurred because of a paradigm shift within a critical mass of astronomers. Copernicus and those who identified with him and his theory of a heliocentric planetary system began to see reality in ways which contradicted the status quo. Sparks flew, charges of heresy were levelled, and the majority of astronomers who just couldn't "see it" dug in their heels, obstinately, refusing to accept this "crazy" theory.

Similarly, when a person becomes accustomed to looking at something in a certain way, but another person provides him or her with a sufficient amount of new information, they just might have an "Aha!" moment (i.e., an epiphany--David W; an apperception--ermanem; a *metacognition--*RyeBread; or a paradigm shift--rhetorician).

A popular and simple way of demonstrating a paradigm shift is to give to a group of people a little card or slip of paper on which there is a fairly simple drawing in black and white. The person handing them out asks the people, "Now, what do you see?" Unbeknownst to the audience, there are actually two distinct images on the paper, but the person who passed out the drawings does not tell them that. Consequently, some people see one image at first glance, whereas other people see a different image at first glance.

When told there are actually two images on the paper, some people begin to "see" them. Whereas before they thought there was only one image (after all, when someone asks us what we see in a drawing, we've been conditioned to see just one thing, and to see it as a "whole," generally speaking), having now been told there are two distinct images, they slowly--sometimes quickly--begin to see both images. Their minds haven't gotten used to seeing both images at the same time, so they see one image and then the other image, back and forth, until they see both images at the same time.

At this point I will not get into the philosophical aspect of how and why we see what we see; how and why people see different things when looking at one, single thing; or if we really can see two things in the same drawing at precisely the same time, when in fact we (our brain) take a nanosecond to see first one thing and then the other.

The point is, the epiphany or "Aha!" moment indicates you've had a paradigm shift. You used to see something in one way; now you see it in two ways, or simply in a different way.

By the way, in the two-images-in-one-drawing exercise, one drawing I've used to test various groups of people contains the image of both an old crone whose head is covered by a shawl, and a young lady whose head sports a stylish hat! Some people need several minutes before they can see both women, and some people take even longer! I have a mini-theory about that; namely, some people are so quick to say to themselves, "I just can't see it. I'll never see it." Sure enough, true to their word, they fail to see it, that is until they convince themselves and/or other folks convince them that they CAN see it, and WILL see it. Receptivity, an open and uncluttered mind, and a deliberate effort to put bias and prejudice aside go a long way toward achieving or experiencing a paradigm shift.

Interesting question. I would say there are multiple stages in this realisation, which are captured well by the conscious competency learning model: 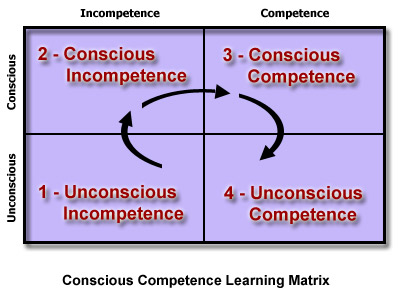 I think you are referring to him going from 1 to 2, so I think words like "realisation" are most appropriate. If you were talking about 2 to 3, words like "learning" would fit better.

The first word that sprang to mind was Categorisation.

The process of recognising that a thing is a thing, with improved discrimination would be re-categorisation.

Hope I'm not being too simplistic here.

Acceptance of the truth or existence of something

How about the word »discovery«?

0
Word for "coming to know about something's existence"

1
Not being able to differentiate between two related but exclusive words?
12
Word for consciously doing something without knowing that it is already a thing
9
I'm looking for a word that means "something must occur with another thing"
1
a good word in english, for human studies that are discussed in religion
0
Eloquentsexual-but-mainly-for-teachers?
1
Word for range of foresight?
0
What's a single-word verb that means "[to] stand out"?
0
Word that means "annoyingly sheepish"