What is the small room most businesses have at their entrance called?

Often times when you enter through the front doors of a business, you enter a small room, generally less than 10ft × 10ft, and then have to go through another set of doors to enter the building. The purpose of this room as I understand it is to create a buffer between the atmosphere outside and inside the building and prevent drafts. During the winter it helps to prevent heat from escaping from the inside of the building and during the summer it helps to keep the cool air conditioned air inside.

I've often seen these rooms so small they are barely big enough for two people to stand in.

What is this room called? I thought it was called a foyer, but the Wikipedia article, Google Image Search, and the Merriam-Webster definition all suggest a foyer is what I've only ever referred to as a lobby.

The difference between a foyer, lobby, vestibule, and reception depends upon function, size and structure.

A lobby and foyer are typically synonymous, but lobby implies that it is a larger size. For example, hotels and theaters have lobbies, but houses do not. A lobby does not need to be at the entryway (although it typically is). Lobby derives from old Latin lobbium, meaning gallery.

A hotel or theatre could have a foyer, but that would typically be a small room off of the entryway. A house can also have a foyer. Foyer derives from focarium, Latin for center of focus.

A vestibule is also small room at the entryway into a building. It is derived from the Latin vestibulum meaning forecourt. It would be rare in AmE to describe a house as having a vestibule. It is a dictionary synonym to the other two, but in common usage I would say it is related more than synonymous.

Of the three there may be dialectal differences governing which to choose. For me, in (New York) AmE, a lobby is larger than a foyer,which is larger than a vestibule. But, I gather they can be used fairly interchangeably in other dialects.

Reception (short for reception desk or center) is the last of these, and it is not an exact synonym. Reception is typically located in one of the the three above. It is the place where people who enter are greeted, typically by a receptionist.

I agree with DavidM that the most technical word for it is vestibule, however, most people where I live (central Canada) would call that little room in an office building, containing the inner and outer doors, an entranceway.

Vestibule is a common term for a room that fits your functional description:

In contemporary usage, a vestibule constitutes an area surrounding the exterior door. It acts as an ante-chamber between the exterior and the interior structure. Often it connects the doorway to a lobby or hallway. It is the space one occupies once inside the door, but not yet into the main interior of the building.

This paper describes how vestibules are used exactly for the purpose you describe.

Saving energy in residential and commercial buildings is considered to be a key area to achieve significant energy saving nationwide1...Along with whole building air leakage, air infiltration through door openings can be an important factor when doors are used frequently... Vestibules or revolving doors are often considered as design measures to decrease the air infiltration through door openings and ultimately to reduce the whole building energy use when doors are used frequently.

Vestibules include revolving doors and swing doors (ref). On the other hand, they can simply be rooms at the entrance to a building, as this White House floor plan illustrates: 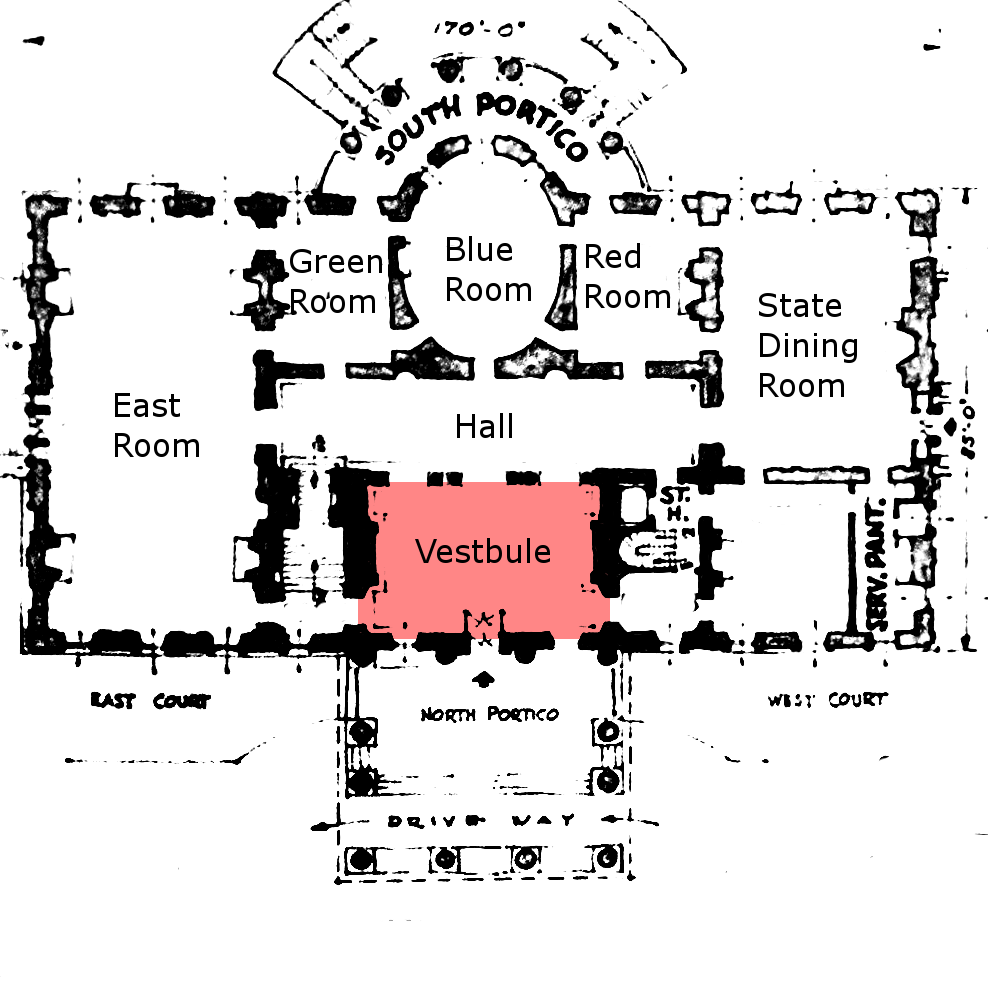 An anteroom is a small room which acts as an entrance to a larger room.

However, for a business, in British English at least, foyer or reception would be used. Although in each of these cases there would be a receptionist present. An anteroom would not necessarly be permanently occupied.

I would call "entranceway", "entryway", or "entry" the small room, generally less than 10 ft. by 10 ft., separated by a double set of doors at the entrance of a business facility. The foyer (or lobby if larger) is usually the room found right after entering through the second set of doors.

"Vestibule" is the technical term for a commercial/office building entryway.

a chamber or room that serves as a waiting room and entrance to a larger room or an apartment; anteroom.

If you don't think foyer is correct, another possibility is vestibule:

a passage, hall, or antechamber between the outer door and the interior parts of a house or building.

The first thing that came to my mind was airlock.

I think that the other answers are not directly referring to the small room you are talking about. On the other hand, no one would say that an enterprise building has an airlock, as this implies an air tight chamber.

Others have mentioned the terms "airlock" and "vestibule", but in the specific case of a bank it is known, at least informally, as a "mantrap": the doors can be locked remotely, keeping a bank robber trapped until the police arrive.

I think the usage may differ depending on the size/nature of the building and even country.

Having said, that my observation is that most of us use the word lobby to refer to this 'space'. This meaning of lobby is here: http://en.wikipedia.org/wiki/Lobby_%28room%29

However, a lobby is not necessarily a small room.

Then there are the other terms used but they're not necessarily single words.

For example, I hear corporates using the term 'front-desk' or 'front-office'. Note that the term desk is not always the desk itself, but the place where the desk is. Perhaps this is not linguistically correct, but it is how people use it. It is similar to tech staff saying 'bring your CPU' when they mean bring the 'system box'. But in reality the CPU is within the box.

I have usually heard that room called the reception room, or reception

4
Natural tendency that adults have to take care of their small ones
7
What do you call the artwork you first see upon entering a place
1
What is a very large room in a building called?
0
Cold containers don't sweat—what do they do?
3
What is it called when you lose a tooth but still have most remaining ones?
35
What is "a room a company provides for eating food" called?
7
AmEng equivalent for BrEng "decorator"
7
Word/expression for a German "Ausflugscafé" - a cafe mainly catering to people taking a walk
3
What is this called: British oven pot holders connected by towel