Word for a person who succumbed to their bad habits

I'm looking for a single English word that refers to:

I'm not sure if such a word exists. I've thought of:

Any ideas? I'm pretty sure there's a word for a person who relapsed back into their bad habits.

n. One who relapses, as into vice or error.

It is usually related with illnesses but it is also used for people who relapses back into addictions. There is a term called "chronic relapser" for these kind of addicts as well.

Numerous failed attempts at sobriety, or a return to drugs/alcohol after a substantial period of sobriety.

While this is a simple and obvious criterion of a chronic relapser, the distinction of an individual who has attempted sobriety and failed is important.

Many addicts have a lifetime of drug and alcohol abuse but have never actually attempted to get sober. What makes chronic relapsers distinct is that they have tried and failed.

A recidivist is someone who has a relapse into a habit such as substance abuse or criminality.

It does not inherently imply a will to escape the bad behavior, but it does imply that some bad effects have been experienced as a result of their actions (such as jail time).

Examples of use with respect to gambling here and here.

With respect to smoking here and here.

There are many examples with respect to drugs and criminal behavior, but those two tend to get mixed up since much such substance abuse is illegal.

At one time backslide, backsliding, backslider were quite common:

The primary sense was from the outset religious—“apostate”— (see various translations of chapter 14, verse 14 of the Book of Proverbs, including the King James translation, but it has long been used for return to less specifically theological misfeasances, as in this from The Bristol Temperance Herald for January, 1855: 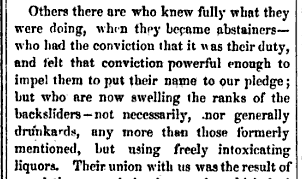 And it's still current; you don't get much hipper than Seinfeld, when Elaine 'bumps into' her ex-boyfriend:

PUDDY: Hey Benes, How are you?
ELAINE: I’m doing great.
PUDDY: Great. (pauses) See ya.
JERRY: Well, that’s it. You two are back together.
ELAINE: What?
JERRY: The bump into. The bump into always leads to the backslide.
ELAINE: David and I will not be getting back together.
JERRY: Elaine, breaking up is like knocking over a coke machine. You can’t do it in one push, you got to rock it back and forth a few times, and then it goes over.
GEORGE: That’s beautiful.
ELAINE: What about you? You were even engaged, and you cut it off just like that.
JERRY: That’s different. I didn’t have feelings for those people. But you, you’ll backslide

You can call them the relapsed.

There is little help available for the relapsed (heroin addict).

This is similar to calling them the fallen. Which might be a bit poetic for your use, but it would work, as well.

I think the other answers are right but I think the word is simply an addict.

Degenerate as a noun.

He is pretty scruffy, even for a degenerate.

3
Word for who professes discrimination based on culture
30
Word for someone who is "quietly reliable"
2
Adjective for a person who is constantly full of wonder/awe
3
Wracking my brain for the word meaning "to have started on the path to the end result..."
0
A word to describe a person who, finding themself in a bad situation, always manages to scrape by?
2
A word or term for someone who likes to insult other people?
3
Single word **or phrase** for somebody who feigns deafness when contradicted?
3
What is the word for a situation where a person benefits from their own mistake and hopes you won't notice?
1
Word for when those close to you continue friendships with someone who has done you wrong
3
Is there a non-negative verb and/or noun that means 'talking factually (and at length) about oneself'?