I've always wondered why it's called top hat, and not just a hat, or some other word, which would better describe this specific type of hats. I mean, all hats are placed on "top", right? 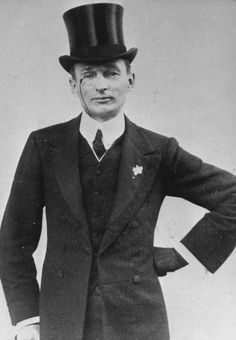 Could it mean that this hat was worn by the "top" people of society in the past? Or it was made of the highest quality materials? Or was it excessively overpriced?

According to the book

on page 247, Top Hat is just a familiar way of saying High hat or Tall hat (self explanatory).

It may have been influenced by the French "Haut-de-forme" (name for a top hat). As haut can be translated either by tall, high or top. At the time there was lot of co-influence between England and France for all things related to fashion, food etc. 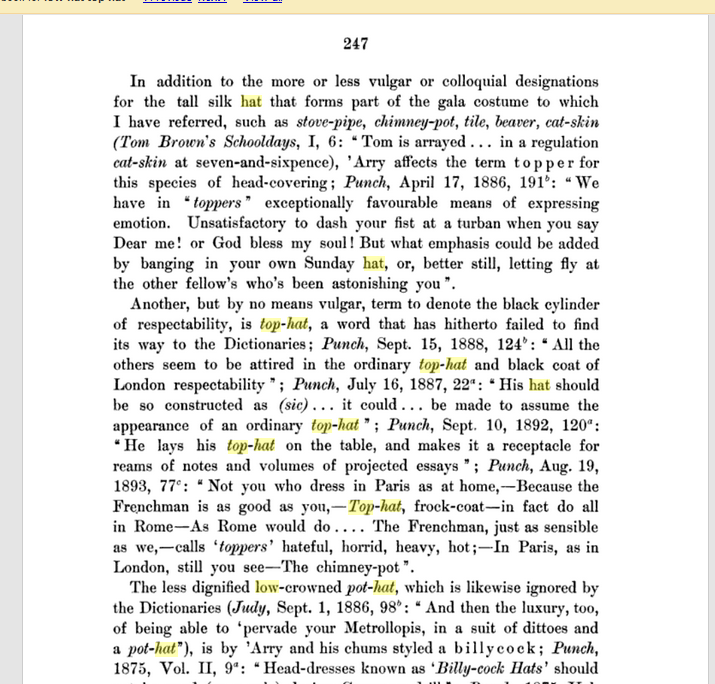 Probably because it was a hat that had a top. Similar hats were known as stove-pipe hats, chimney-pot hats, high hats and tall hats.

When did a ‘silk hat’ become a Top Hat?

I found no evidence that the name top hat existed prior 1875. Even the British Chambers' Encyclopaedia: A Dictionary of Universal Knowledge for the People, printed in 1874, didn't mention top hat in its “hat” entry but spoke extensively about beaver and silk hats.

Numerous websites and books cite the Hatter's Gazette article about an Englishman named John Hetherington, who in 1797 was arrested for wearing a “silk hat”. Apparently, its shocking appearance was responsible for inciting a riot; women fainted, children screamed, and dogs barked wildly. He was later fined — an astronomical sum in those days — £500. Despite the reams of citations online and off, there are no surviving records of the Hatter's Gazette article.

In The Ladies' Gallery. By Madame Ch. Hundreds

the rule is to wear your hat in the House, [the house of Commons] and a very odd effect it has to see men sitting about in a well-lighted and warm chamber with their hats on their heads. [...] Mr. John Martin. ... it appears, had never, before County Meath sent him to Parliament, worn a hat of the hideous shape which fashion entails upon our suffering male kindred. [...] “Never,” Mr. Martin is reported to have said ... “never will I stoop to wear a top hat. I never had one on my head, and the Saxon shall never make me put it there.” He was as good as his word when he first came to town, and was wont to appear in a low- crowned beaver hat of uncertain architecture. But after he had, for some weeks, assisted the process of Legislature under the shadow of this hat, the Speaker privately and in considerate terms conveyed to him a hint that, in the matter of hats at least, it was desirable to have uniformity in the House of Commons.

Mr. Martin, [...] abandoned the nondescript hat and sacrificed his inclinations and principles to the extent of buying what he calls “a top hat.” But he has not taken kindly to it, and never will.

The next excerpt tells us that, surprisingly, top hat in the 1870s was slang, its original name was beaver.

I was in the rear of the division, and dressed in plain clothes; my hat was what modern slang would term “a top hat,” and what in those days we called “a beaver.” This beaver I was rather proud of; it was only the second one I had possessed, a cap having previously done duty for the covering of my head

The true inventor of the silk hat, which later became known as top hat, was always an Englishman.

The Chronicle of Hats in Enjoyable Quotes By Ida Tomshinsky

The first official recorded history of what we now refer to a silk top hat made from silk plush in England is always credited to George Dunnage, a hatter from Middlesex in 1793 [...] Dunnage's silk hat was initially described as “imitation of beaver.”

Top hats between the years 1840 and 1850 became incredibly tall, some reaching eight inches in height. This would explain why the silk hat was also known as “chimney-pot hat”, “stove pipe hat”, “high hat”, “high silk hat” and “cylinder hat” (Wikipedia)

Barrie England's supposition, “it was a hat that had a top”, could explain how the hat earned its slang term, the distinctive headgear certainly had a flat top. Note the word top is set off with quotation marks in the excerpt below. 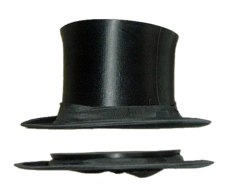 On May 5, 1812, a London hatter called Thomas Francis Dollman patented a design for "an elastic round hat" supported by ribs and springs. His patent was described as:

An elastic round hat, which "may be made of beaver, silk, or other materials." "The top" of the crown and about half an inch from the top "as well as "the brim and about an inch , the crown from the bottom" are stiffened in the ordinary manner. […] 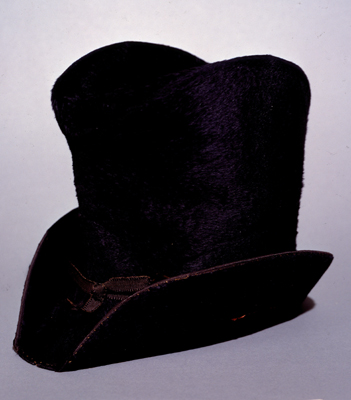 This has to be one of the oddest photos that cropped up while I was hunting down the beaver / silk hat / top hat. The group of topless men belong to Brighton's Swimming Club, the oldest swimming club in Great Britain. Some say the photo was taken as far back as 1863, while others sustain the 1900s is a more realistic date. Nevertheless, it does show the incredible difference in height and styles these “toppers” were made in. 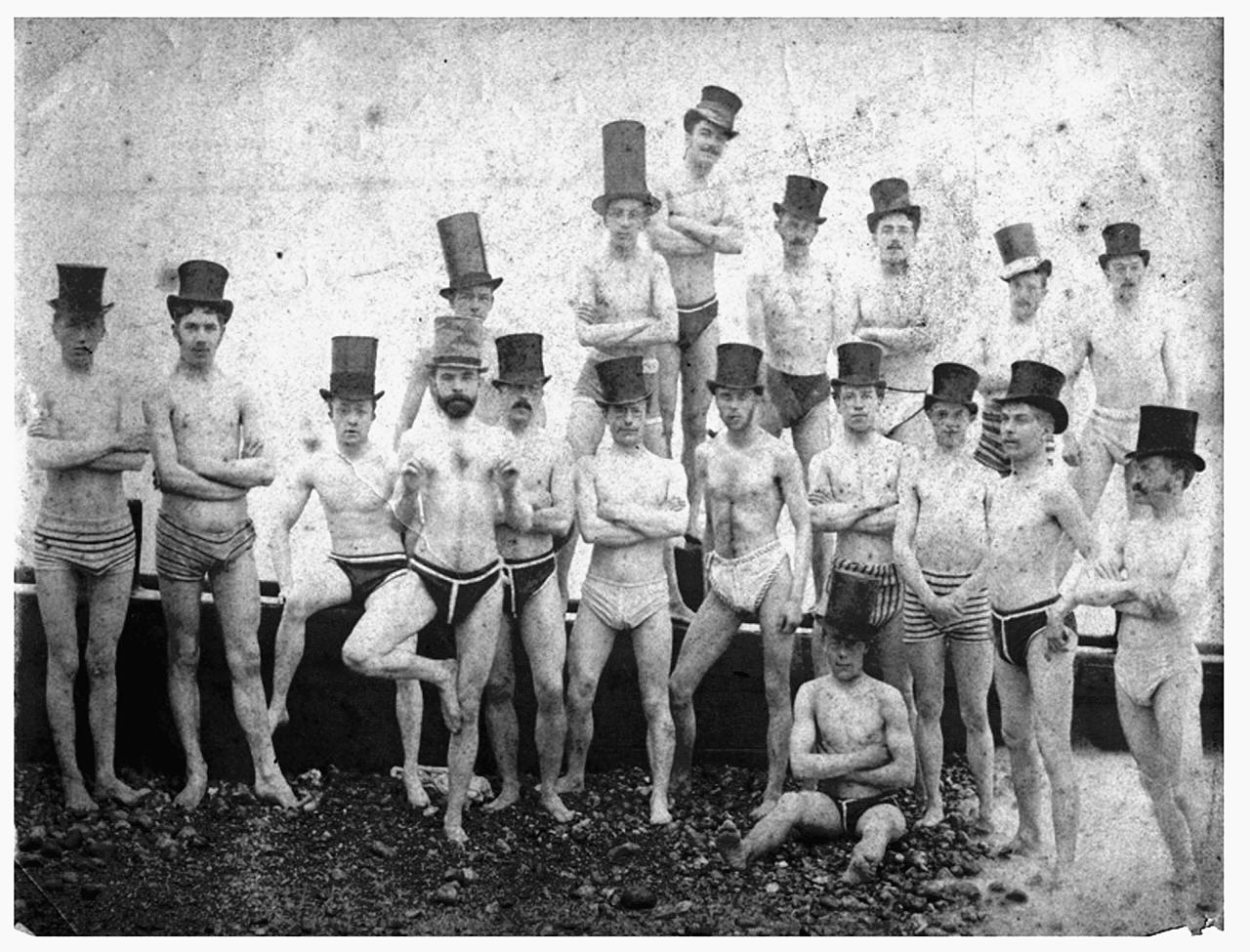 The origin of the term might have derived from an earlier fashion trend set forth in the early 1600s by way of the capotain, or sugarloaf hat. This has was also known as the pilgrim hat and the flat topped hat. 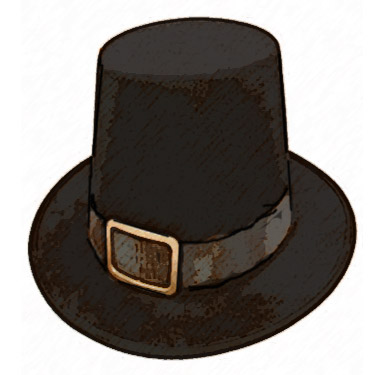 The hat is famously associated with the Pilgrims that traveled to the Americas 1.

Although it is difficult to find a direct association, the tricorne hat was slowly fading out of fashion with the new 'top hat' being seen more often. This date is started to be seen in the late 1700s.

Perhaps the introduction of the new style was another way for the newly established USA to establish their own image and shed a trend of English-centric fashion that centered around the tricorne, which is a staple in most uniforms during those times.

(This is my personal speculation and haven't yet found sources to back it up.) 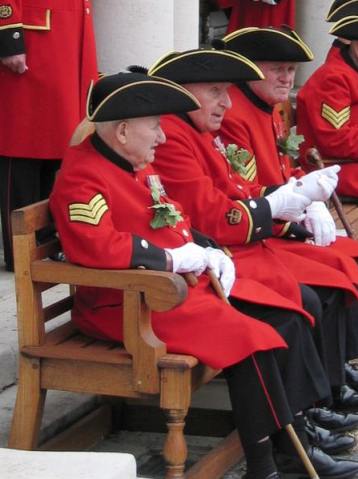 9
What does "salad days" mean, and when was it coined?
11
Why are you "reading" a particular subject at university?
1
Is the term "go-to-hell hat" in common usage?
19
Why "hoist" in "Hoist with one's own petard"?
14
"I've gotten better-looking as I get older" When did "gotten" re-enter the BrEng vernacular?
25
Button up that frog, will you?
15
Where does the term "Flashlight" come from?
12
Crush the spearhead leek
11
Tennis: When and where did 30-all (and 15-all) start transitioning to the counterintuitive 30-up (and 15-up)?