What's the name of this kind of act?

What's the name of this kind of act? It is commonly seen between friends. (I mean the act between two people, not necessarily 4 people like this one.)

Or can you describe it with a few words? 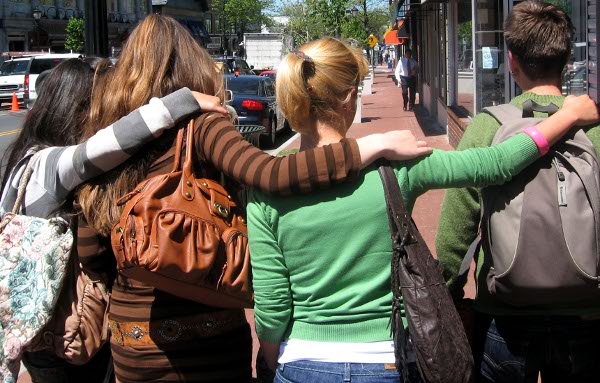 This is normally described rather literally as "putting an arm around someone's shoulder".

For example: Mike put his arm around Tracey's shoulder while they were watching the football game.

It would not be an "act". "Act" implies a performance of some kind, like in front of an audience. "Action" would be all right. "Gesture" would be a good choice. Though it generally implies movements during speech, it can also simply mean "posture" but carries a social connotation, too. A person can have a particular posture while alone, but a gesture would require at least one other person to observe it or to be the recipient of it for it to have meaning.

Example: He put his arm around my shoulder as a reassuring gesture.

A more succinct phrase would be shoulder embrace.

Not the answer you're looking for? Browse other questions tagged phrasing or ask your own question.

6
Alternative structures for “not only … but also …”?
4
Can a negative be used to express a positive, such as “mangoes are sweet and so aren't papayas.”
0
Is “every… doesn't…” really the same thing as “not every…”?
1
Less Freedom or Fewer Freedoms?
3
Another way of expressing “morally wrong” ideas
1
What is the correct terminology for describing the modes of application of a product to a plant?
0
What's an accurate/alternative way to represent the idea of a “blueprint”?