When did the term "scientist" overtake usage of the term "natural philosopher"?

The word scientist comes from the Latin scientia, but when did its usage become more prevalent than the term natural philosopher?

From the data reported from the Corpus of Historical American, scientist started to be used more frequently than natural philosopher between 1860 and 1869. 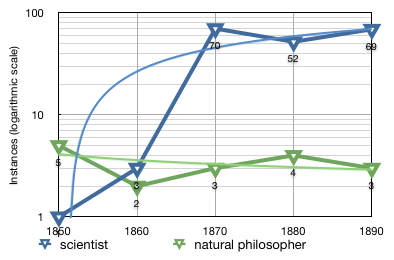 According to this blog post (and this), William Whewell proposed the term in 1835.

Opposition continued into the late 1800s and early 1900s, but according to this Google Labs ngram, the crossing point appears to be a little after 1870:

I present a different picture: 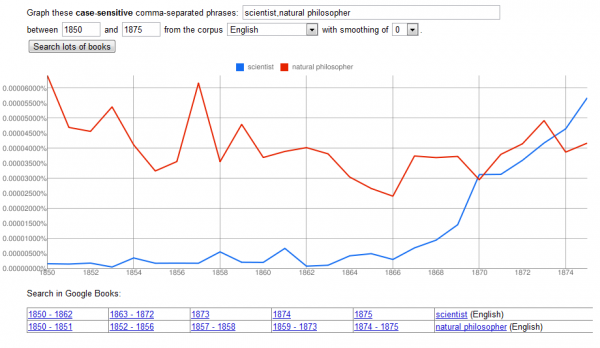 it probably happened in 1870 - just refined the Book Ngram Viewer

Unfortunately the answers using the Google Ngram data are basing their conclusions on a fallacy. "Scientist" is a 1gram and "natural philosopher" is a 2gram. There are many more 2grams than 1grams, hence the frequencies are not comparable.

Edit: And now I'm not so sure.

By "token" I mean an ngram which doesn't have to be unique, so the above text just has 17 1grams.

Clearly there are a lot more 2gram types than 1gram types. However the frequency counts reflect multiple usage and so use token counts not type counts. If in the above we count tokens rather than types how many 2grams are there?

Well, each word apart from the last word, "approval", is the first word of a 2gram. Hence there are 16 2grams in the text. However, if the text is an extract from a much bigger piece of text then "approval" will also be the first word of a 2gram if ngrams, where n > 1, are allowed to span sentences. Hence counting tokens there are the same number of 2grams as 1grams and hence we can indeed compare ngram frequencies where n can vary.

Not the answer you're looking for? Browse other questions tagged philology neologisms or ask your own question.

27
Why do written English vowels differ from other Latin-based orthographies?
16
If I invent a word, what language is it?
6
Which of these two should be preferred: "sinification" or "sinicization"?
27
Is there a reason to use "mono" over "uni"?
6
Ending a sentence with "because [noun]."
3
How did 'arching' come into use as a verb meaning 'to thwart'?
8
Where did the word "proc" originate?
10
Origin of the term 'truther' as applied to conspiracy theorists
3
Is there a term or phrase for the desire for Apocalypse?
3
Where did the word red-tapism come from?