How/From where did the term “paradigm shift” originate?

Paradigm Shift + Thinking outside of the box = Death of a Salesman

This term became current with Thomas Kuhn's The Structure of Scientific Revolutions (1962): if you Google "paradigm shift was first used", all results confirm that it was first used in that work. He described the same concept in his earlier work The Copernican Revolution (1957), but apparently he didn't use the term paradigm shift there. It may have existed before Kuhn, but all sources seem to suggest that it did not.

See below what Google ngrams finds. The roughness near the turn of the century seems to be the result of a bug or incorrect data, though.

Yes, Kuhn's writings first mention the idea of paradigm shifts. Somewhere in the Structure of Scientific Revolutions he thanks one of his colleagues at UCal Berkley for introducing him to Wittgenstein. He also talks explicitly about Wittgenstein in the beginning of the book--that is, later Wittgenstein. It is clear that Wittgenstein's On Certainty is going in the direction of paradigm shifts--i.e. assumptions that are treated as facts. But I'd also check out Koyré's From the Closed World to the Infinite Universe--I'm pretty sure Kuhn mentions Koyré in the preface to SSR. Although the term paradigm shift wasn't used before Kuhn, the general idea isn't new (I'm thinking of Hume, Kant to an extent, even Protagoras--at least as presented in Plato's Theaetetus). --Hope this helps. I'd definitely recommend reading some of these books esp. later Wittgenstein.

"Paradigm" is a Latin transliteration of the Greek "παράδειγμα", which in current Greek means example, but, in ancient and pre-modern Greek can also mean "general template" or "framework". Plato used the word "παράδειγμα" among many other words, including "ιδέα" (idea) and "μορφή" (form) to describe his General Theory Of The Forms, which used to be called General Theory Of Ideas in past usage of English. It makes perfect sense for Thomas Samuel Kuhn, a scholar and thinker very much at home in physics as well as Greek philosophy, to have picked up "παράδειγμα" from Plato.

As additional information, the first sentence containing "paradigm shift" reported from the Corpus of Historical American is dated 1980-1989. 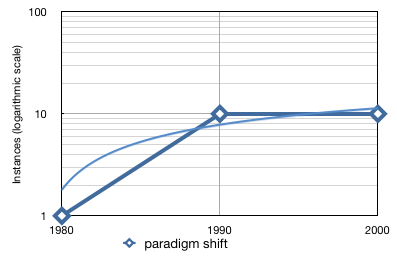