what is grammatically correct:

IMHO I'd say thanks is one of those plural nouns which implies it requires go but I'm not sure.

It's for the acknowledgements section of my thesis; it should be formal English.

While neither version sounds incorrect, I would agree that "go" sounds better when no article is used: "special thanks go to Tom."

If an indefinite article were used, "goes" would be correct: "a special 'thanks' goes to Tom."

I recommend sidestepping the issue by avoiding the "go" entirely:

Special thanks to Tom ...

With special thanks to Tom ...

The phrase I would expect is thanks go to, but looking at the Corpus of Contemporary American, I notice that thanks goes is also used. 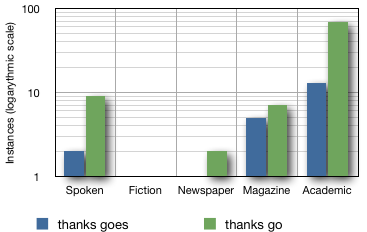 Actually, either of those examples could be considered grammatical, and neither sounds wrong to my ear.

Formally speaking, it should be thanks go, since thanks is a plural noun. If in doubt, just use thanks go and don't worry about it.

However, because thanks is so often used as a fixed expression, more and more people treat it as grammatically singular despite its plural form. For that reason, it's not uncommon to hear thanks goes, and this usage sounds natural to me.

"Special thanks goes to" sounds plain wrong to me. Perhaps it's because I'm Australian.

It will be "special thanks goes to" when it's a singular noun or a group. In plural, it will be "go".

Not the answer you're looking for? Browse other questions tagged grammatical-number verb-agreement or ask your own question.